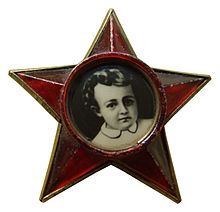 Pin worn by each Oktyabryonok, a member of the Communist Youth organization for children aged 7 to 9. The portrait in the middle is of Lenin as a child. (Photo from https://en.wikipedia.org/wiki/Little_Octobrists).

A Communist organization in the Soviet Union for first- to third-graders (ages 7 to 9.) Named after the October Revolution. Associated with the Pioneer organization (ages 9 to 14.)

An Octobrist wore a ruby-colored five-pointed star badge with the portrait of Vladimir Lenin as a child. The symbol of the group was the little red flag on the badge.