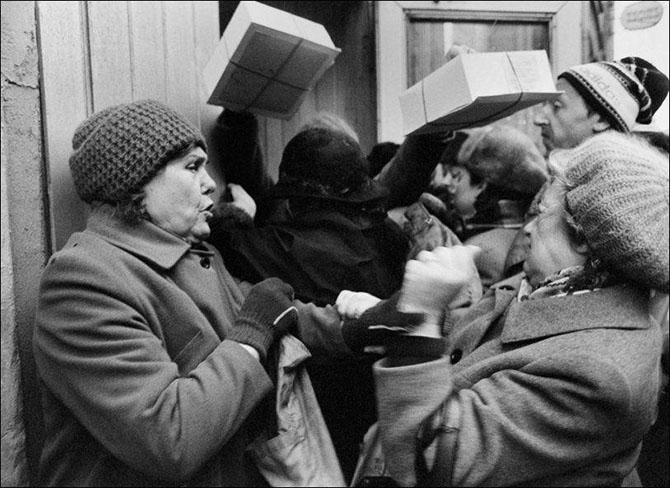 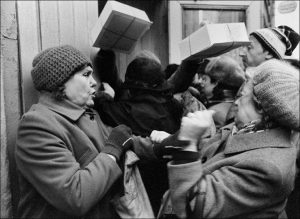 The most recognizable word in the Soviet Union. It means ‘not available’ / ‘in short supply.’

The meaning did not differentiate between habitual shortages and complete out-of-the-blue disappearances. The latter happened at random to random products and for random durations: sugar, eggs, yellow onions, buckwheat, mayonnaise. Some lasted for years, some for a short time.

The word did not apply to seasonal produce in off-season period, like strawberries, green onions, eggplant, tomatoes, or watermelons. Neither did it apply to what was not expected to ever be available, for ex. caviar or cervelat salami. A popular joke went: a foreigner is looking for caviar; the sales person tells him that it is not available because there is no demand; “just stand here and see if any customer ever asks for it,” she says.

In both food and non-food categories, nothing was too insignificant to become a deficit: chicken, canned peas, fresh fish, shoes, detergent, wallpaper, napkins.

Shoes, especially children shoes, were a chronic deficit, even though stores were full of Soviet-made unwearable footwear. One went shopping without specifying the goal, because there was little that would not be desirable if a queue for it was encountered. Someone said that the Soviet industry always does not produce something. 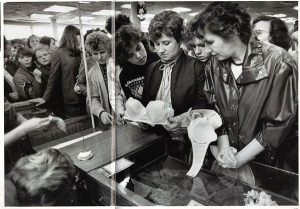 Line for bras. (Photo from http://forum.armkb.com).

Deficit did not affect, or affected less, the small minority: people with blat or with resources to make purchases on the black market. Special stores or back doors of regular stores supplied goods to high-ranking officials and Party functionaries.

In 1964, special department stores opened in the largest cities that served exclusively couples who applied to get married. They were known as certificate stores because only customers with certificates issued by the Wedding Palace or by the offices of vital statistics were allowed to enter between the marriage application and marriage registration dates. They were stocked by imported goods that one would never encounter in regular stores. And sales clerks were polite there. In Kiev, this store was called Kashtan (Chestnut).

The phenomenon of deficit was created by the planned economy, the view of non-military spending as nonessential, and the mentality that the country of the victorious socialism needed only bare necessities (bread, milk, galoshes, kerchiefs). A worker’s paradise had no use for luxury products like toilet paper.