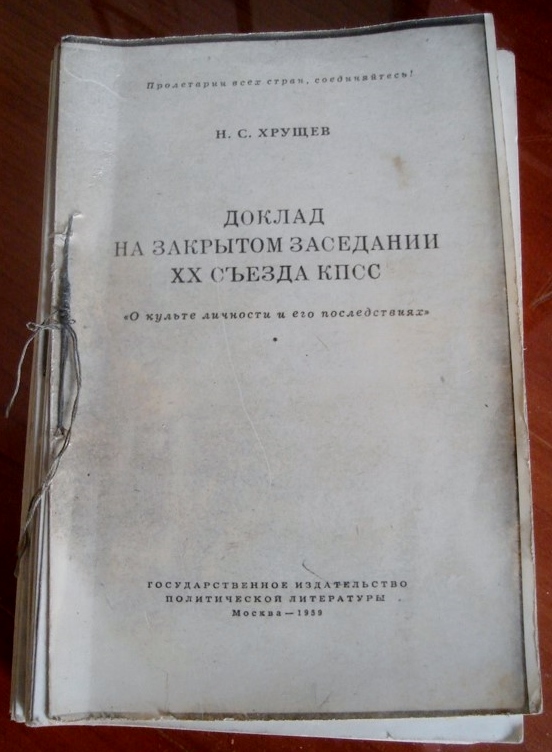 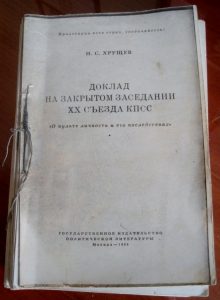 Samizdat publication of Khrushchev’s speech at the 20th Party Congress in 1956 where Stalin’s cult of personality was exposed. The meeting was closed to the public. Photo from: https://samizdatcollections.library.utoronto.ca/content/timeline-rights-activism-soviet-union

Self-published. This word is a contraction of two Russian words: sam – self and izdat – abbreviation for izdatelstvo (publishing.)

The term was applied to the uncensored copies of banned material distributed in handwritten form or typed on a home typewriter by the Soviet dissident movement.

In the words of one Soviet dissident, “I myself create it, edit it, censor it, publish it, distribute it, and get imprisoned for it.”

That was the only way to circulate forbidden material because all the copy machines, printing presses, and office typewriters were under control of the KGB that stored reference printouts for identification.

Prior to the second half of 1980s, circulation of Samizdat was dangerous; those caught were arrested for anti-Soviet agitation and propaganda. The future Nobel laureate Joseph Brodsky was charged with social parasitism and convicted for not working to benefit the society but just being nothing but a poet.

Some Samizdat publications reported human rights abuses in the Soviet Union, information on arrests and trials, changes in emigration policies, news from the West. Publications focused also on repression of religion and freedom of speech.

Regardless of the subject, Samizdat came to symbolize inventiveness and defiance of the people. The very fact of reading Samizdat was considered a clandestine activity.

The term Tamizdat applied to printed material smuggled from the West. The first part of the word ‘tam’ means over there, far away.