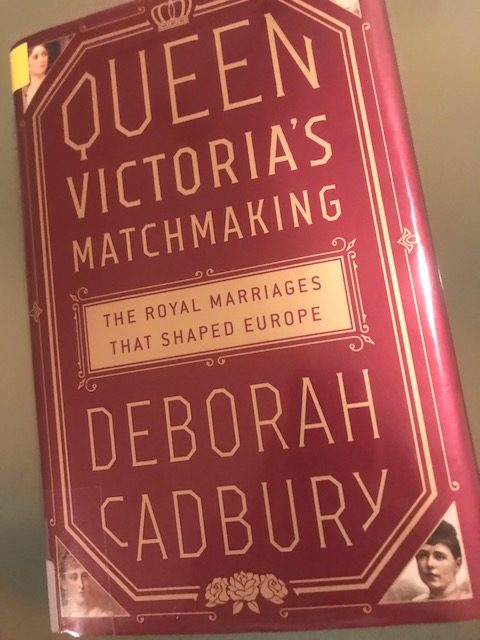 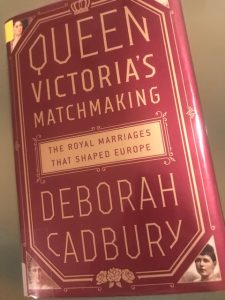 This fascinating book tells about Queen Victoria’s strategy to guide her grandchildren into marriages with European royals. She was a veritable Granny’s Dating Agency. An iconic queen, Victoria resolved to achieve her beloved late husband’s vision of a stable and prosperous Europe united by British liberal values.

Within the British constitutional monarchy Victoria exercised symbolic control but nothing limited her grandmotherly powers. Of her nine children, eight married royalty. Reinforced by forty-some grandchildren she maneuvered in the same direction, the family became “a British institution that was shaping the future of Europe.”

And shape it the family did – just in time for Karl Marx’s “let the ruling classes tremble.” Six of Victoria’s children entered German royal houses, one of them Prussian, of yet-to-be-unified Germany. The oldest son tied the knot with a Danish princess. The grandchildren wedded royalty of Greece, Romania, Spain, Norway, and Russia. Then cousins married cousins thus following Granny’s dictum that “in families all should be made up again, for life is so very uncertain.”

The author closely examines the most historically consequential of Victoria’s matches. Queen Victoria’s Matchmaking offers an intimate view on family dynamics, behind-the-scenes squabbles, and the price the world paid for the marriages she orchestrated.

Should Have Listened to Grandma

Soon after Victoria died, European empires crumbled. The WWI and the Bolshevik Revolution proved royal bonds irrelevant and brittle. Kaiser Wilhelm, Victoria’s oldest grandson, always disappointed her.  An autocrat, he dismissed the path of constitutional monarchy that his English mother and “Grandma Queen, the all-powerful” advocated. Instead of an ally this marriage match produced a dangerous liability.

It was Wilhelm who wielded “the killer blow” to his Russian cousins. The book focuses on his role in the Tsar’s tragic fate and the success of the Bolshevik Revolution. To win WWI, he unleashed on Russia, in Churchill’s words, “the most grisly of all weapons” – Lenin. Ironically, he, an ardent champion of capitalism, made the establishment of a socialist state possible when as Churchill said, he “transported Lenin in a Sealed Train like a plague bacillus from Switzerland to Russia.”

Many Victoria’s grandchildren were forced into exile, including Wilhelm. Did he, in the end, regret not listening to his grandma?

“Russia I could not wish for any of you”

One country never featured on the Queen’s list of preferred matrimonial choices – Russia. Victoria was horrified by the absolute power of the Tsars, the existence of a vast underclass, the entrenched anti-Semitism, the willingness to meet protest with bullets.

But not all her grandchildren wished to sacrifice their hearts’ desires to their doting grandmother’s instinct. When Alexandra married the future Russian Tsar Nicholas II, “of all the royal marriages of her grandchildren this most undesirable match was unmistakably a love match.” However, Victoria realized that Alexandra was “spectacularly ill-fitted for her future role,” both physically and mentally. The later frightening experiences and obsessive fear for her son who suffered from hemophilia placed her in the center of her family’s downfall.

As Cadbury unfolds the story of the last years of the Russian monarchy she also projects to the reader the future of the vast country. That future began with the merciless murder of the Tsar’s family tacitly approved by Lenin. That future was enabled by many factors and characters, the most important being two Queen Victoria’s grandchildren: the unscrupulous bully Kaiser Wilhelm and the oblivious Tsarina Alexandra.

On a side note: the future Tsar of Russia, Alexander II, had considered proposing marriage to Queen Victoria. Providentially, his father, Tsar Nicholas I, decided that Russia would never be number two to Britain. How different the world would have been had not the educated, broad-minded Albert won her heart.

Queen Victoria’s Matchmaking is an eye-opening lesson in history that still affects us and an insight into family interactions common to royal and non-royal families. Deborah Cadbury accomplished quite a feat by making complex history riveting and interlinked relationships easy to follow.