Learning to Blog at 70, Bena Shklyanoy Shines as a Natural Storyteller 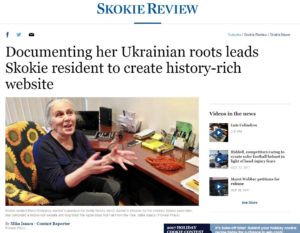 03 Nov Learning to Blog at 70, Bena Shklyanoy Shines as a Natural Storyteller 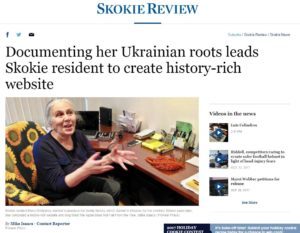 Over the past three years, Shklyanoy, 70, has launched a new website tracing 150+ years of her family’s Soviet Jewish history, become an avid (and often very funny) blogger, is on Facebook and Twitter and co-wrote and presented a Reader’s Theater version of her story to critical acclaim in Providence (see the Broadway World Review here) last summer.

Now she is working on fundraising to launch two plays in Chicago next summer…the original staged reading that traces her family’s roots from pre-Bolshevik Russia through the Save Soviet Jewry movement of the 1970’s. The new play will look more deeply into the decision to leave the USSR and adjusting to life and culture…and being Jewish… in the US.

“The principal at my daughter’s new Jewish school called, outraged,” recalled Bena. “How could you send pork chops for lunch?,” he demanded. “What did I know? Jewish was something stamped on a passport,” Bena shared in a blog post shortly after launching the site.

Bena launched her new website, AppleDoesNotFall.com in the Summer of 2016, just before she presented at the Jewish Gen conference in Seattle, on how to trace your family history. Bena took 11 years to trace 150+ years of her family’s story. Her story spans two world wars, the Bolshevik Revolution, annihilated shtetls, the Holocaust, the Soviet empire (rise and decline) and the 1970’s large-scale immigration of Soviet Jews to the U.S.

“My father-in-law got assigned his 160-square-foot room in a six-room apartment after he returned from the front in 1944,” said Bena. “At least, it wasn’t a very crowded apartment—only sixteen people between the six families.” But when her daughter asked why they didn’t move, if they didn’t like it there, Bena knew that her family’s experience, and that of an entire generation growing up under Soviet rule, would be lost unless she could explain it and make it available via a platform that her daughters and future generations would actually access…Online. “I knew if I published a book they wouldn’t read it. A website was the only way to go.”

Bena’s first website was self-published in the free version of WordPress and was geared more to someone who knew her family or what they were seeking. “As the research went deeper and deeper, I realized this was a window into the intricacies of Soviet reality that most are not aware of,” said Bena.

She started with surveys to academics, genealogists, teachers and others who might use the site to ask “would you use this information as primary source material about this time in period?” And, if so, “how would you see it best organized?”

The answer was a resounding yes. The new site is organized by a chronological telling of her family story, historical events, culture and customs. Plus there is an extensive photo gallery and glossary for everything you might want to see or know about Soviet Ukraine.

Once launched, Bena and the site were featured in the Chicago Tribune’s Skokie Review. She wrote an article for JUF News, “From 72 kopeks to a Starbucks card,” and contributed a chapter to Never Heard Never Forget: Stories of Victims and Survivors of the Holocaust in the former Soviet Union.

The real gem continues to be her ongoing blog posts that capture the tenor of life in the USSR and adjusting to her new home in the US. She has since added a collection of book reviews on related topics and authors and welcomes guest posts from others with stories to share.

Learning to blog unleashed a natural storyteller, stories ripe with colorful and sardonic images of the life, culture and day to day realities of the USSR.

The Play(s) “And Then What? The Children of Velvel and Sheina-Gitel Averbukh”

The play evolved when one of the original survey takers to inform the website, Kevin Olson, turned out to be a playwright. (For full disclosure…he is also my cousin—who knew he wrote plays?!).

“The website and Bena’s stories were a perfect match for our mission,” said Kevin. “I had been looking to share the stories and lives of Soviet Jewry for some time. When I learned how close Bena was to her Grandmother Polina, I discovered that the stories of Polina and her siblings encapsulated an historical arc that could be distilled into a play.”

Kevin is Artistic Director of First Hand Theatrical in Providence, RI. He was intrigued by the story as soon as he saw it. “There are not many first-hand representations of this generation who grew up in the Soviet Union,” said Olson. And, given today’s politics, “it was a perfect time to create a play that pulls back the curtain to glimpse inside of individual lives under Soviet rule, while also providing insight into the mindset of those leading Russia today.”

After the sell-out crowd and great reviews from Providence (oh what the heck…here’s the review again), they are now looking to do fundraising to expand and stage a play in Chicago next summer.

As far as how age played a role in starting this project. It had more to do with her stage of life. She was now retired from a long career in IT and had more time available. “Age is not a topic that comes to my mind,” said Bena. “I’ve always felt comfortable in my own skin so, outside of outward signs that I’d prefer not to mention, age has remained just a number to me, an abstract number.”

That said, age did play a role as Bena seriously thought about the future, for her children and grandchildren. “For the first time in my life, age played into a decision I made when I realized that the task of safeguarding my legacy, my family story must be my top priority,” said Bena. “It was my responsibility to hand it down the line. But even then it wasn’t the age per se (I was 59) that created the urgency. It was the understanding that this abstract number ran only so high,” said Bena. “It was time to get down to the brass tacks of research, recollection, cousin interrogation and other such things that could not be rushed.”

What’s Next for Bena Shklyanoy?

Now that the website is launched, Bena is unstoppable and open to ideas.  In addition to the play she has connected to a young film-maker whose Ukrainian (aka not Jewish) grandmother was placed in a Displaced Persons (DP) camp after the war. They have pitched themselves as a pair to speak to Universities. It would be a fascinating conversation of two very different perspectives from the same time and place in history.

In the meantime, Bena continues to be active on the speaking circuit on her own, speaking at libraries, synagogues and next February for the Rogers Park Historical Society.

And, of course, there’s the dream that she will one day get a call from Sergey Brin, who will say “that’s my mom’s story, too…tell me more…(and let me give you whatever you need to make this into a movie directed by Steven Spielberg.)”

Or maybe they will just have coffee, and she will tell him what life was like for his family in the former Soviet Union, and share insight into the conversations that probably surrounded his family’s decision to emigrate.

“There is History and there is history,” said Bena. “The former — researched taught, focused on the world — creates our collective story organized by date and cataclysm. The latter — private and timid — consists of memories, both told and unspoken, of families and individuals,” she said.

“This is the story of a generation of people,” said Bena. “A generation that is aging and still has a story to tell.”