The Soviet Jew and the Pork Chop: Adapting to a New Culture 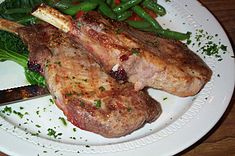 05 Aug The Soviet Jew and the Pork Chop: Adapting to a New Culture

So I sent pork chops to the Jewish School….is that a problem?

I only bought whole chicken, not chicken parts, in the first year or two in America. They were nice and plump. Whereas one bluish bony long-legged Soviet bird made several dinners, its Western comrade would make ten if I tried but I didn’t have to.

For variety, I occasionally I splurged on pork chops, the thin cuts. Now, you might say, “aren’t you a Soviet Jew? I thought Jews didn’t eat pork.” Well apparently, they don’t, as I learned from my daughter’s principal at her Orthodox Jewish school. But, as a Soviet Jew who wasn’t allowed to practice Judaism, how would I have known?

Try to grasp that religion just didn’t exist. Elders might have remembered the old ways, for example I wasn’t allowed to drink milk with meat, but I was told it was because I would get a stomach ache—to prevent me from accidentally bringing shame or even danger to our family by practicing a religion.

So, back in our new home in the USA, my daughters took either a pork chop or a chicken kotleta to school. The former almost got them suspended. The principal called me hysterically repeating, “How do you dare?” “HOW DO YOU DARE?”

It took a while for her to realize that I did not know what angered her, even after she explained that my daughter admitted that pork chops were her favorite food.

We had a long muddled conversation. She was baffled, and skeptical, that a Jew would not know that pork was an insult to a Jewish Orthodox school. I was baffled about the reason.

In the end, she extracted a promise from me to eliminate pork and agreed to introduce my daughter to the rules of kashrut. I asked her how to spell the word.

Apparently, for the American Jews we, their Soviet brethren, were not who they had fought to free. Jewish faces, names, and the discrimination suffered in the Soviet Union notwithstanding, we were a strange breed.

Following the pork fiasco, a synagogue sisterhood that was active in the campaign “Save Soviet Jews” interrogated me about my former life. Their parents were from the “Ellis Island” generation—the ones who escaped Russia before the revolution. They wanted to help us because they came from same shtetls in Ukraine and Poland that we did, albeit 70 years later.

Yes, the nationality in my passport was Jewish because my parents were Jewish. No, we knew nothing of kashrut or of not working on Sabbath. Learning Hebrew and circumcision were actually illegal…you could go to prison for it. There were no Jewish schools, and going to the synagogue could get us fired.

Maybe it was my far-from-perfect English but my replies did not register. The audience was certainly confused, even disgusted. The women who had contributed time, clothing, and money to win my freedom felt cheated.

“I bet you did not even belong to a temple,” one woman said at the end. “What does it mean to belong to a temple?” I asked. My audience dropped their collective jaw. I raised my voice, “Had we not been afraid of attending a temple maybe we would not have required saving.”

Does my experience sound familiar? Do you have friends that come from a different culture?