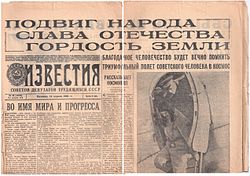 Newspaper Izvestia. April 14, 1961. Yuri Gagarin returns to Moscow the day after circling the earth in sputnik. Photo from: https://ru.wikipedia.org/wiki/Известия

Izvestiya was the national newspaper published by the Presidium of the Supreme Soviet of the Soviet Union.

The title means ‘news’ in Russian. Izvestiya was founded in March 1917 in Petrograd. It expressed the official views of the Soviet government on domestic and international events.

Izvestiya became an independent publication in 1991, following the dissolution of the Soviet Union. It describes itself as an “all-national” Russian newspaper and covers the market, culture and leisure. Its circulation is over two hundred thousand.