The Road to Cosmos is Paved with Silk Long Johns

On April 12, 1961, the Soviet sputnik “Vostok” (“East”) carried Yuri Gagarin into space and brought him back, living proof that the Soviet Union was light-years ahead of the United States. Yes, Space Age started in my old country with Gagarin’s famous “Poyekhali! (“Let’s roll!”).

Sputnik, by the way, is one of the few words the outside world adopted from Russian, except in Russian it sounds spootnik… in case you wondered.

On April 21, 1976, my family squeaked through the crack in the Iron Curtain grudgingly unlatched under the force of intensifying domestic anguish and international pressure.

I was a teenager when Yuri Gagarin won over the world with his smile. 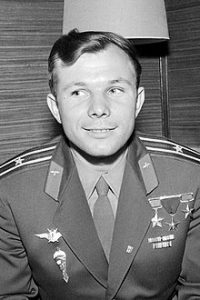 Yuri Gagarin, the First Man in Space. 1961. Photo from: https://en.wikipedia.org/wiki/Yuri_Gagarin

The rules of royal etiquette ignored, the Queen of England granted him a photo-op – rules did not apply to a space man. We did not realize then that his photos from inside the sputnik were actually taken after his return.

Life was good! Plus, posters declared “the Party solemnly proclaims: the current generation of the Soviet people will live in communism.” The cutoff date to communism (read: full-strength paradise) was set to 1980. Gagarin’s achievement generated excitement and pride that were palpable. I felt like writing a poem – I wished I could.

Suddenly, physics became the hottest subject and male wannabe physicists acquired a romantic halo. Such a catch once accompanied me to a school dance. Before each dance, my female classmates humbly approached me for permission to ask him to dance.  Oh, the sweet taste of absolute power! 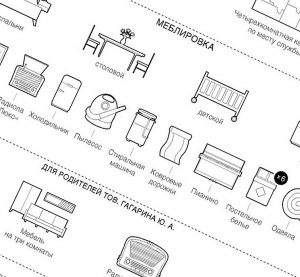 List of the major gifts Gagarin received after the flight (furniture and appliances). Photo from: https://www.kp.ru/daily/26219/3103302/

Living quarters near his place of service,

1,000 rubles to each of his two brothers and his sister.

Anticipation of every need of its heroes, from a rain coat to silk long johns, was the middle name of my Motherland.