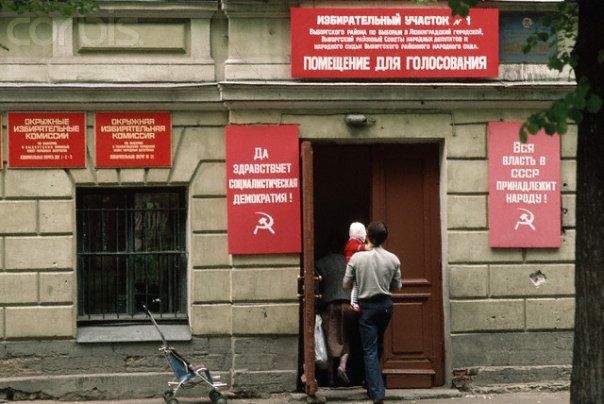 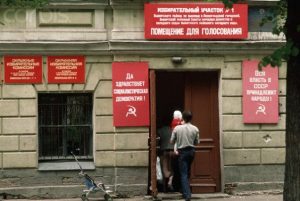 My last Election Day in the old country was in 1974. Since then, other than noting an occasional new name on top, I hadn’t thought of the Soviet then Russian tsar replacements. However, the Russian elections a few days ago had a whiff of anxiety. Of course, not about the result but, oddly, about assuring 70% of participation with 70% of it going to the favorite.

What has the world come to? Thirty short years ago, 100% was the default and now 70% is a mandate, and not a sure thing to boot?

To me, familiar with Russian-think, this angst meant that, left to their own devices, the voters would not supply the magic number and that measures would be taken to reach it.

The Communist Party projected the Election Day as a joyous holiday. Popular songs played on the radio. Bright posters abounded. They invited “Everyone to the Polls!” They guaranteed a bright future that only the candidates of the ballots could bring. 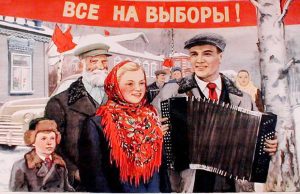 Soviet Election Poster “All to the Polls!” Photo from: https://fishki.net/1862145-vybory-v-sssr.html (Source: www.dela.ru)

The candidates belonged to the “bloc of communists and non-party-members,” a formula that covered the entire adult population. The well-dressed, rosy-cheeked, accordion-playing, care-free beings on the posters headed to the polls.

Well, maybe the well-dressed and care-free part was a stretch considering these beings were accustomed to long queues for every necessity and to share living space with multiple families. But until the early 1960’s the happy anticipation was indeed there on Election Day Sunday—polling places offered goodies that were rarely seen in the four-year interval between elections. One time, I remember, it was fresh fish. Another time, caviar sandwiches, no less. Plus oranges. Always oranges—even when everything else disappeared. Oranges became the staple without which Election Day was inconceivable.

And then suddenly they were no more. Disoriented, voters milled around hoping against hope that the delivery was simply delayed. Hard to wrap one’s mind around this development. It was no one-off though: from then on, a polling place promised nothing besides a ballot box.

As oranges vanished, so did the incentive to handle the ballot personally.

On every Election Day my father, my husband, and other men collected the passports from their neighbors, took the stack to the polling place, checked themselves and everyone else in, got the ballots, dropped them into the box, and returned the passports.

I learned recently that this is called ballot-stuffing…

Several months before the election, a company would allocate a conference room to accommodate voting and assigned some of its non-managerial staff to serve as agitators. An agitator was handed a list of about a dozen people whom he or she was to visit regularly to make sure they cast their ballots. And to implore them to do it early—an agitator could not leave the polling place until all the people on the list performed their civic duty. 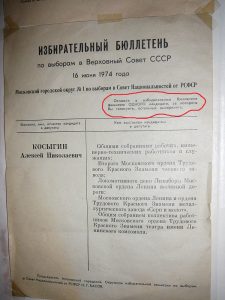 Soviet election 16 June, 1974. Voting ballot with name of the candidate. The circled text: “On the election ballot, leave only the ONE candidate for whom you vote and cross out the rest.” Photo from: https://fishki.net/1862145-vybory-v-sssr.html (Source: i.piccy.info)

A ballot contained a single name. A ballot box stood conveniently in the middle of the floor ready to receive clean ballots. Few dared or cared enough to attract attention by using a voting booth to cross out that pre-approved name and write in another.

Invariably, participation stood at 100%; the portion of “Yes” votes hovered a few hundredths below—including in the year prior to the collapse of the Soviet Union.

The Wonders of a Multi-Party System

While in Italy we were petrified by the sight of raucous teenagers waving red flags from convertible clunkers. The flags did not bode well for an approaching election, we warned an Italian acquaintance. The victorious Communists would surely take away his restaurant and send us back. He laughed: “They always make noise. On the election day – where are the Communists? No Communists!”

A few days after arriving in Chicago, less than two months before the 1976 election, a neighbor invited me over to her apartment. She had Jimmy Carter’s photo on her cupboard. How did you make the decision for whom to vote, I asked. “Just look at his wonderful smile!” she exclaimed. “And I always vote Democratic anyway.”