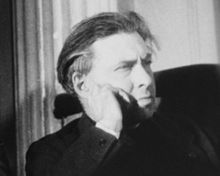 Ilya Ehrenburg in 1943. Photo from: https://en.wikipedia.org/wiki/Ilya_Ehrenburg

Ilya Ehrenburg (1891-1967) was one of the most prolific and respected novelists and journalists of the Soviet Union. He fled Tsarist Russia because of his revolutionary activities and did not return to the Soviet Union until 1940. 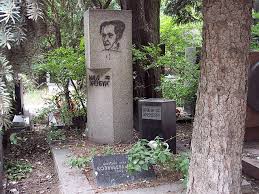 Ilya Ehrenburg’s gravesite. Picture on the stone by Pablo Picasso. Photo from: https://en.wikipedia.org/wiki/Ilya_Ehrenburg

While in Europe, he was a friend of many famous figures, including Pablo Picasso who painted his portrait that is displayed on Ehrenburg’s grave stone.

Ehrenburg was a war reporter in the WWI, Spanish civil War, and WWII. As a Jew and a dedicated Communist, he was a relentless anti-Nazi. During WWII, he was a leading member of the government-sponsored Jewish Anti-Fascist Committee, most members of which were executed. Soon after the war he wrote a poem commemorating the Babi Yar massacre.

Ehrenburg is infamous for his vicious anti-German wartime rhetoric and his incitement to treat Germans as sub-humans. His articles appeared in newspapers and in leaflets contributed to the rape and murder rampages of Soviet soldiers against German civilians. His loyalty earned him the Stalin Prize.

After Stalin’s death, Ehrenburg criticized Stalin’s rule in his novel The Thaw and his autobiography People, Years, Life. The title The Thaw gave its name to the relatively liberal 1950s and early 1960s that are known as the Khrushchev’s Thaw.

Ehrenburg co-edited the Black Book that documented the Holocaust. It was originally written in Yiddish and partially printed after WWII. However the entire edition was destroyed in 1948 at the outset of the cosmopolitanism campaign. In Russian, it was published in Jerusalem in 1980, and finally in Kiev, Ukraine, in 1991.

In keeping with the Soviet policy, he publicly criticized Israel and Zionism. In 1987, his private archives were transferred to the Jerusalem’s Yad Vashem library and archive. It was done according to his will that stipulated the waiting period of twenty years after his death.

Among other important historical documents, his archive contains one concerning a 1959 pogrom in Malakhovka, a village near Moscow. The disposition of his archives proves that Ehrenburg never privately renounced his ancestry.