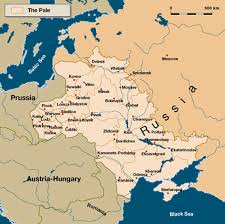 In her decree of 1791, the Russian Empress Catherine the Great designated a region of the Imperial Russia, acquired by military means, to wall in, metaphorically, and divide and isolate, physically, the majority of its Jewish subjects.

Until the Bolshevik Revolution of 1917 when this ghetto-like system collapsed, Jews were allowed to permanently reside only in the towns inside the Pale of Settlement referred to as shtetls. They could relocate within the Pale but their descendants remained assigned to and considered residents of the town where the decree had originally found them; children belonged to the shtetl of their father.

The right of residency beyond the Pale and in major imperial cities was restricted to rich merchants, holders of university degrees, dentists, artisans, and discharged soldiers. If the artisan failed to adhere to the business as declared in the petition for residency, his residency right was revoked and he was expelled from the city. The decree with all its big and minute statutes was scrupulously enforced.