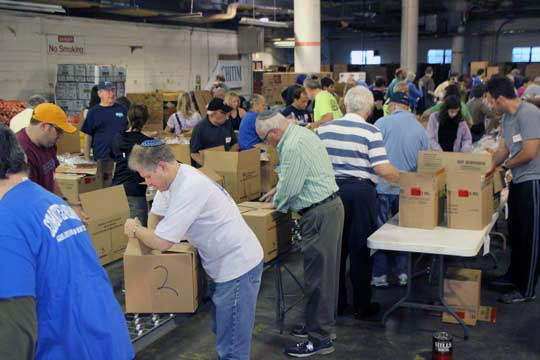 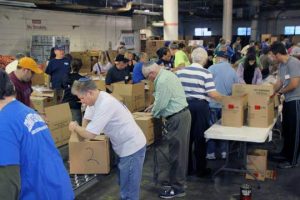 See location and other details here.

Maot Chitim is the organization behind this effort as it has been since 1908.

In the early 1980’s, the head of Maot Chitim asked me to interpret as they delivered the Passover packages to the Russian senior citizens living in government-subsidized buildings. He wrung his hands almost literally over a conundrum the group had faced in the previous two years.

For the first time in its 75 years, the organization was doing something wrong and thus failing its recipients. Some packages were missing items—how embarrassing! The truck drivers had to call the warehouse to request additional salamis or lettuces be hotfooted to alleviate the emotional distress… of the drivers’ as well as the seniors’. Clearly, the language barrier must have been the culprit.

New to the concept of charity myself, I sat proudly next to the driver of an N-wheeler who repeatedly told me how intimidated he was last year by “the Russians.”

As our truck arrived, a few upper bodies popped out of umpteen-story windows, in spite of rain and blustery wind. They resolved to ascertain that we would not run out of groceries by giving more to some than others. A crowd congregated in the lobby and stubbornly refused to return to their apartments and wait.

No one minded spending hours, if necessary, in the drafty lobby to watch the process and personally accompany the volunteers who carried the packages. Then many returned to the lobby to confront the driver, a big strapping man hiding behind me, about items missing from their boxes—they said that neighbors compared the content and created lists.

Or Not Language Barrier?

I saw, in a flash, the cause of the conundrum. I also knew that no American would see it. Language barrier was not to blame. It was the instinct of finagling more than the limit by any means—what if the stuff would not be there tomorrow? I did not even try to explain. I simply assured the head of the organization that it would get better. You don’t want to know, I told him, how much bananas we used to buy in the first months in America.

Recognizing their own in me, the seniors knew the jig was up. I advised the complainers to call or stop at the Maot Chitim office during the week to pick up what was missing. They returned to their apartments, some defiant, some shamefaced.

My heart went out to people who had spent most of their lives where I only spent 30. The brief time outside the motherland did not rub off yet on the mindset created and calcified by decades of Soviet grocery lines.  The driver was impressed beyond words—he didn’t have to run to the public phone even once.

The next year my presence was useful but not vital. The cohort of complainers thinned drastically. The third year, I had nothing to do. The older generation of my community did not expect to be left out or cheated any longer. No one waited in the lobby. Gratitude replaced shrewdness. The progress had nothing to do with language.

Still, not enough Russians have participated in the packing and delivery. Well, that’s another step, another time, another tradition. Maybe this year will be the start for you?

See location and other details here.