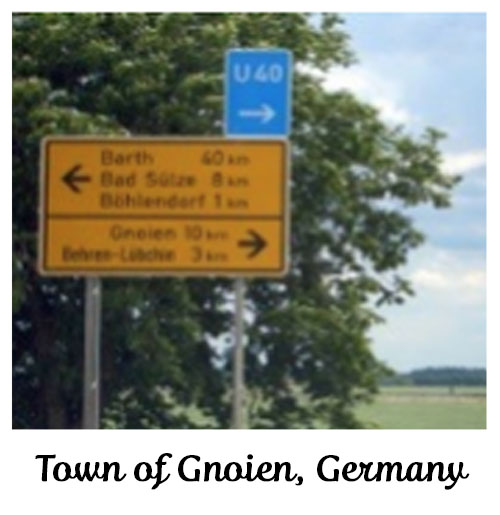 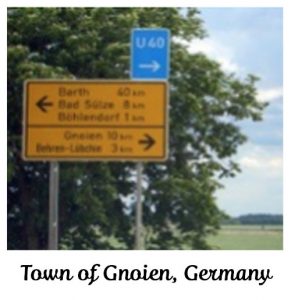 A small 13th century town in north-eastern Germany (See https://appledoesnotfall.com/town-of-gnoien-germany-album/). Its claim to fame was being one of the seventy in the area that issued the so-called Notgeld or Reutergeld, literally Not Money or Reuter Money, in 1920s to honor a local painter Fritz Reuter.

The bills produced for collectors, featured his paintings and rhymes, some anti-Semitic. 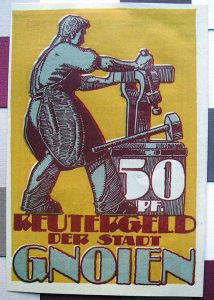 The front of the 50-Pfennig Reutergeld for the town of Gnoien.

The Gnoien Notgeld says “The Reutergeld of the town of Gnoien valid only within city limits until February 15, 1922” 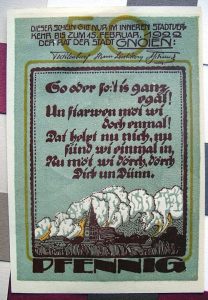 The back of the 50-Pfennig Reutergeld for the town of Gnoien.

and contains this poem: “Any way you turn, it doesn’t matter, we all have to die someday! We can’t help it, we are in it already, so we must go through thick and thin.”

The word Gnoien is Wendish, the language of the local Slavic minority where gnoy means silt, dirt, waste material; in Russian, peregnoy means compost. Gnojno is also the name of Belarus and Polish towns and villages. Gnoyinsky is a surname used in Eastern Europe but any Gnoyensky belongs to our tree and nobody else’s.