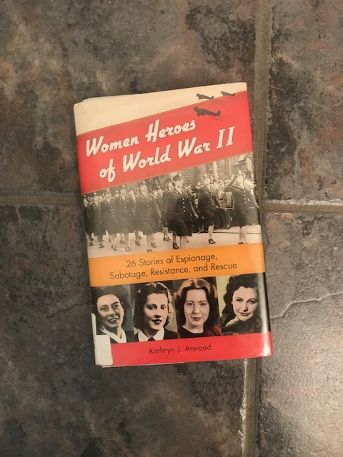 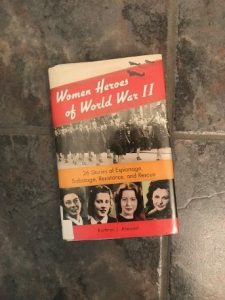 But I’m Only a Woman!

“But I’m only a woman!” said Marie-Madeleine Fourcade when asked to organize a Resistance network during the Nazi occupation of France. Her network of 3,000 members provided the Allies with priceless information about German troop movements and weaponry. On D-day, the Allies used her map showing German defenses on the Normandy coast.

What a contrast to Fourcade’s government that unhesitatingly surrendered to and openly collaborated with the enemy—it enacted and enforced “anti-Jewish laws even before the Germans ordered them to.”

The contribution of French women to the Resistance was so meaningful that the French government-in-exile granted women the right to vote they didn’t have before the war.

Marie-Madeleine Fourcade is one of the 26 women from 8 countries of whose heroic lives Kathryn Atwood told in this book.

There is nothing in common between these women, is there?

A German student wrote and distributed anti-Nazi leaflets. A daughter of a German count rescued more than 60 Jews and anti-Nazis.

A Polish teenager agreed to sleep with a German officer for a promise to keep secret the presence of Jews in her house. A Polish social worker rescued 2,500 Jewish children from the Warsaw ghetto.

A French beautician saved over a 100 downed Allied pilots and  provided the Allies information so valuable that Winston Churchill sent her a personal letter of thanks, “This last mission is the equivalent of a victory on the battlefield!”

A famous African-American dancer living in France worked for the Resistance. A pastor’s wife and her neighbors managed to save 5,000 lives, 3,500 of them Jewish (more about them in https://appledoesnotfall.com/village-of-secrets-defying-the-nazis-in-vichy-france-by-caroline-moorehead/).

A couple of Dutch musicians saved 36 lives, 32 of them Jewish, by digging a tunnel from their house to the woods. Two middle-aged sisters saved many in their secret room that Nazi were not able to locate. A young Belgian artist created a 1200-hundred-mile escape track into Spain for Allied servicemen. Of the 700 who used that route, she personally escorted 118 in 32 crossings.

They and many thousands who remained unknown shared one common trait: they could not be silent in the face of evil.

A Country of Mensch

And then there was Denmark. Unlike the mighty French, Danes fiercely protected all the Jews living in their country. Collaborators were few and when one attempted to burn a synagogue he was sentenced to 3 years in prison—during the Nazi occupation!

When the roundup of the 7,000 Denmark’s Jews was approaching, the country made it its mission to save them all. Other resistance activity stopped until they were taken by boat to neutral Sweden.

Ebba Lund, a 20-year-old, escorted a total of almost 800 to the boats that each fit 25 to 35 people below the deck. Years later she said, “For me it was not a Jewish problem, it was a simple humanity problem.” On top of that, the Danish government received permission to supply food and vitamins to the 500 who were caught and sent to concentration camps—almost all of them survived.

The British women became part of war effort en masse. They worked on farms and on cargo ships, drove ambulances, and were involved in every branch of the military. Native-speakers of Nazi-occupied countries were sent into those countries to work with the Resistance fighters.

Noor Inayat Khan, a half-Indian half-American Muslim who grew up in France, parachuted there as a radio operator. Betrayed, she was murdered in the Dachau concentration camp, her body burned. Nancy Wake, an Australian married to a Frenchman, helped Allied prisoners and Jewish refugees escape and fought with the Resistance—“one of the most highly decorated women from World War II.”

Americans, in the beginning of the war, agreed with the isolationist America First Committee and its spokesman Charles Lindbergh, a national hero and a pro-German. Awakened by Pearl Harbor, the country, like Great Britain, aimed to encourage women to participate.

That’s when the poster We Can Do It! aka  Rosie the Riveter was created. 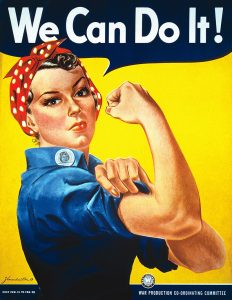 We Can Do It! By J. Howard Miller (1918–2004), artist employed by Westinghouse, poster used by the War Production Co-ordinating Committee – From scan of copy belonging to the National Museum of American History, Smithsonian Institution, retrieved from the website of the Virginia Historical Society., Public Domain, https://commons.wikimedia.org/w/index.php?curid=5249733

The most dangerous Allied Agent was considered Virginia Hall. Germans called her The Limping Lady. They didn’t know that she had a wooden leg to replace part of her leg lost in an accident. A fluent French speaker, trained by British Intelligence, she was the first female field agent in France where she engineered sabotage attacks and prison escapes and found places for supply drops. To return to England, she made a 30-mile trip on her leg stump.

Martha Gellhorn, Hemingway’s wife, was the first female correspondent to report on the D-day invasion and one of the first to tour the concentration camps. She wrote: “Nothing about war was ever as insanely wicked as these starved and outraged, naked, nameless dead.”

And everyone knows Marlene Dietrich. A German by birth, she refused Hitler’s invitation to make films for the Reich, instead giving up her German citizenship and becoming an American citizen. Marlene joined the entertainers who followed the troops in Europe.

During WWII, the vast majority of people stayed quiet, just trying to survive. The women-heroes the reader meets in this book, and their sisters who didn’t make it into books made their choice because they would not have been able to live with themselves if they didn’t. We all are in their debt.

Remember that for each of the heroes, there were the collaborators, informers, betrayers who denounced them. Like the Munich university custodian who denounced the student distributing anti-Nazi leaflets. He received “a thunderous ovation” at the rally in his honor. That custodian and that crowd had also made their choices. Remember them too.

In peacetime, we are confident we would be among the heroes. In wartime… Hopefully we won’t need to find out.

The stories in the Women Heroes of World War II do not read as biographies but rather as novels, thrillers, adventures. Atwood provides a succinct summary as well, for each country’s role in WWII which makes it easier to put actions in perspective. And don’t miss the lists of books and movies created by the women of her book or based on their lives. It’s a fascinating collection of sources for everyone, especially for the youth.