Where Do You See Yourself in Five Years? 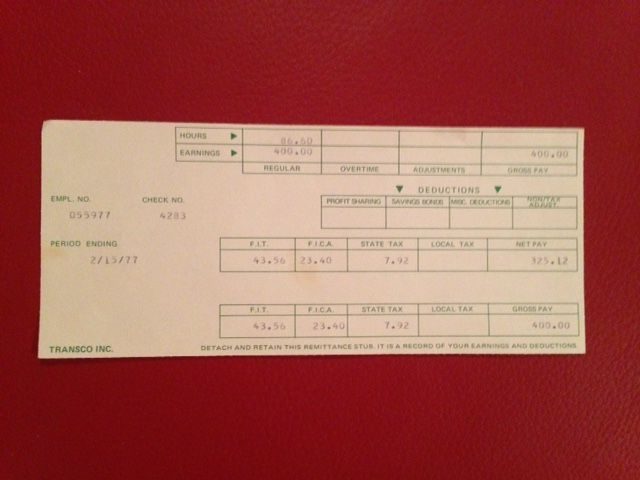 10 Feb Where Do You See Yourself in Five Years? 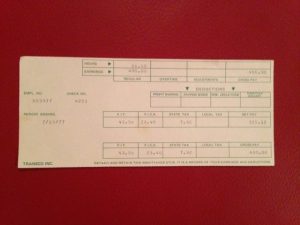 The World Will Be Our Oyster!

This stub belongs to the first check issued to my husband at his first real American job on February 15, 1977, five months to the day after we arrived in the United States.

The few sessions at the Jewish Vocational Services paid off. We learned about resumes and interviews. Our advisor convinced us that we could not proceed without acing these ingredients. Maybe not convinced but we had no choice because we had no one else to provide a reference or confirm our legal status. So we tempered our impatience.

The advisor warned that the first interview would be a practice run. New immigrants with poor English who just discovered the existence of resumes could hardly expect to land their first jobs right away. Finally, he set up an interview for my husband at Transco Inc., a small engineering firm in Downtown Chicago.

The rules of job hunt were numerous and mind-blowing. Only one reassured us: the human resources departments did not control hiring—in the Soviet Union, they were all-powerful.

Male seekers of office positions were to wear a black, navy, or gray (never brown) suit and freshly polished shoes; a somber tie and a white shirt. Same palette went for women plus the skirt had to be below-the-knee and no pant suit. Replies to “do you like America” or “why did you leave the Soviet Union” were “I do” and “because of discrimination” – that was a no-brainer. Answers to “why do you want to work for this firm” and “where do you see yourself in 5 years” were trickier. But saying “I just need a job” or “I don’t know what will happen in 5 years” was not a good idea, for some reason. And it was vital to exude confidence.

To get a job in the Soviet Union all you needed was an inside connection (and of course, Jews knew better than to approach companies off limits to them.) Maintained by the human resources departments, the employment record book — the Soviet equivalent of a resume but not tweakable – listed all the jobs ever held and the reasons for quitting or dismissal.

My husband left for the interview way ahead of time to account for any improbable eventuality. Angry at himself for not bringing a few sheets of toilet paper, he bought a newspaper, just in case. We had not yet forgotten the newspaper squares that preceded Soviet toilet paper that made an appearance a few years before. He was amazed that the bathroom in the lobby provided the treasured rolls – in every stall. This discovery proved the most enduring memory of the day.

The interview consisted of a high-school-level math test, not a challenge for a structural engineer. The interviewer impressed by the performance extended an offer on the spot without asking about the candidate’s 5-year plan. He did ask if a position of draftsman at five dollars an hour would suffice. Needless to say, my husband accepted. He would have accepted any job.

I don’t remember what we had for dinner that night but chopped liver and herring had to have been center-stage – we still did not have our fill of whatever was a rarity in our former life. That February 15 we celebrated our personal Master of the World Day. It would have trumped Valentine’s Day the day before anyway but we did not know about it yet.

The salary came in the form of a check, not cash, on the first and fifteenth of each month. The boss dropped it off at each desk in a sealed envelope. And said thank you.

$325 twice a month – we were set for life! And my husband worked overtime when offered. Nobody cheated, he said – two hours of unsupervised overtime was just that and not a minute less. Our advisor told him to never refuse overtime. Why would one do that, we wondered.

The boss did not have a chauffeur, he drove his car himself. And he worked long hours and some weekends. In the summer, his teenage son worked part-time at his father’s firm cleaning offices, moving furniture, removing garbage. He was paid a salary, like other maintenance workers. We were not accustomed to youngsters working before they finished school. And working in a menial job when your father owns a company ‒ simply unimaginable!

When my parents arrived in the United States on May 5, the boss gave my husband and a coworker, our former compatriot who already owned a car, a day off with pay. He said that meeting immigrants was sacred in America. Capitalists were good people, after all.