Waiting for America: A Story of Emigration, by Maxim D. Shrayer 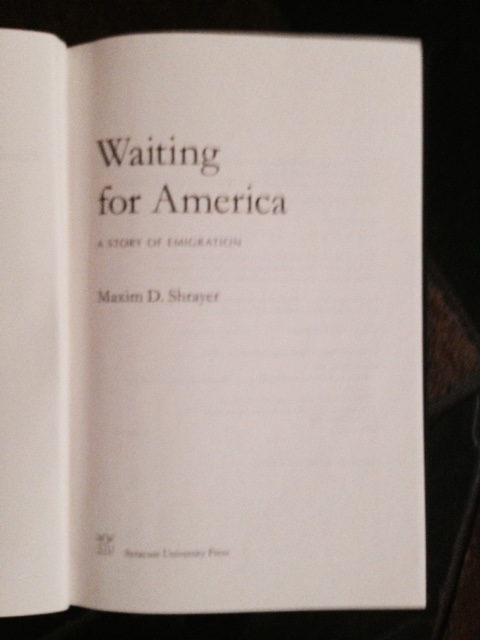 31 Dec Waiting for America: A Story of Emigration, by Maxim D. Shrayer 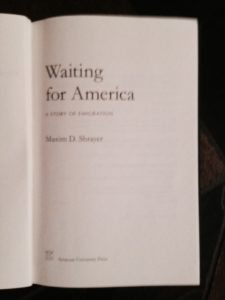 In 1987, when emigration from the Soviet Union resumed after a seven-year interval, Maxim Shrayer and his family left the country. He was twenty years old. The first words out of his father’s mouth after they cleared the customs in Moscow were “We got you out, son. Finally we got you out.”

The family waited to say that ever since they were refused permission to emigrate nine years before. For nine years, the Shrayers had endured the precarious existence of the Soviet underclass of refuseniks.

The memoir Waiting for America captures Maxim’s emotions, doubts, and anxieties in the time between Moscow and America. But the reader cannot help thinking of his parents. Of what they and others like them had gone through for a chance to get their children out of the Soviet Union. A chance they were aware might not materialize.

“On the Brink of an American Future”

Twenty years after that moment, Waiting for America chronicles Shrayer’s time in Vienna and Ladispoli, the suburb of Rome, where Soviet immigrants waited for entry visas to the United States. “Like a time buffer, the three months described in these pages divided my life, separating my Russian (and Soviet) past from my American present.”

Beginning on the first day, the feeling of coming out of a fog is overwhelming. The feeling “as though I’d just been born.” As overwhelming is the hunger to see and experience and understand the previously forbidden world. Every day brings countless discoveries. Grocery stores that are museums where one is allowed to touch the exhibits; cordial sales people; pornographic movies; the concept of privacy.

The book is full of funny, romantic, and sensual scenes; sketches of strange relatives and absurd happenings; and commentary on culture shock. Shrayer tries unsuccessfully to explain to the Westerners his Soviet life, the shortages of basic foods, and that, in spite of coming from Moscow, he could not be a Russian because he is a Jew—it is mutually exclusive.

As was typical to Soviet immigrants, Shrayer’s vision of the future consists of hazy disjointed bits. To a twenty-year-old, America is “like a game where no one knows the rules and everyone plays by them.” But to his parents, America is the dream that refuseniks sacrificed for –“a place where you don’t have to take part in anything if you don’t want to.”

Portrait of a Young Immigrant

Waiting for America stands out from a number of memoirs by those who were small children or adults with families when they left the USSR. Because Shrayer was neither. He was at the most vulnerable age: one foot still in teenage-ness; the other, in a yet not fully formed identity.

Above all, the “twisted game of mutual deception” that was Soviet life and the nine refusenik years mark Shrayer’s character. In Italy, he identifies with local youth who, to him, represent his future, rather than with his fellow co-tribers though he feels resolutely Jewish.

The author speaks from his heart and from the vision in his mind’s eye—“my restless Soviet past, my refugee Italian present, and the vague promise of a permanent American future.”

Most importantly, Shrayer does not slip into a hindsight perspective. That is no easy task as world-changing history followed on the heels of the three summer months of 1987.

In 1988, the rivulet of Soviet Jews who, like the Shrayer family, had been sitting on their suitcases, metaphorically speaking, gained strength. Another year – and that modest stream transformed into a tidal wave. The exodus coincided with, or one might argue precipitated, the crumbling of the Soviet bloc, the fall of the Berlin Wall in 1989, and the collapse of the Soviet Union in 1991.

The emigration from the Soviet Union can’t be explained. One can only tell the story to preserve the memory and ensure that lessons are learned. Waiting for America does just that.