A Visit to the One Last Jew in Brusilov, by Charlotte Adelman

13 Oct A Visit to the One Last Jew in Brusilov, by Charlotte Adelman

Bust of the Ukrainian poet Taras Shevchenko in the town of Brusilov. Photo from: https://ru.wikipedia.org/wiki/Брусилов_(Житомирская_область).

In this article that appeared in Pioneer Press, Charlotte Adelman describes her visit to Brusilov, the Ukrainian town where her father was born.

A wonderfully written article that everyone should read. (To expand image, right-click then choose “view actual size.”) 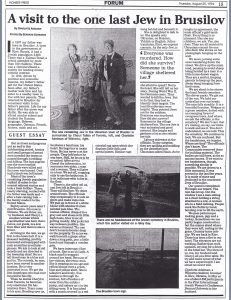 Article “A Visit to the one last Jew in Brusilov” by Charlotte Adelman published in Pioneer Press of August 25, 1994.

An ordinary Soviet story. Pogroms, Revolution, WWII, Nazi relying on the locals to identify Jews, one little Jewish girl is saved by a local family. She and the officials that accompany the visitors find it funny that neighbors helped make the town Judenfrei. Well, almost Judenfrei. Were the parents of these officials among the helpers?

Not a word about this in the Wikipedia Ukrainian, Russian, or English articles about Brusilov. An obligatory memorial to the victims of the Nazi massacre has been installed. As obligatory as a bust of poet Shevchenko. The Jewish cemetery is simply an empty lot – not a headstone in sight.