The Tale of Two Spies 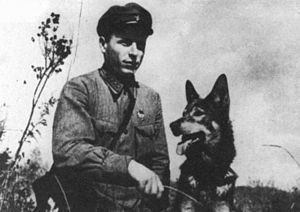 24 Mar The Tale of Two Spies 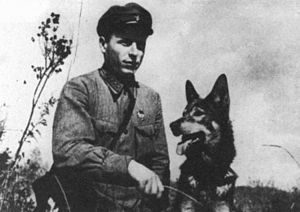 As a ten-year-old, I loved the book series that featured a brainy border guard and his equally brainy dog. It was based on the career of a real-life officer Nikita Karatsupa. No trick went past that guard. For instance, he could tell (I still remember) when a spy put his shoes heel-forward. But spies were everywhere and he wasn’t.

So we, Soviet children, watched out for foreign-looking types. Glasses, a felt hat, and a neat briefcase were a dead giveaway. In a jittery little flock we would follow any stranger who fit the description into the building until we heard what he said to the person who opened the door for him.

According to spy stories, a question “are you selling a sofa?” was a passcode. The tale became so entrenched that eventually a joke grew out of it: if people knock on your door by mistake and ask if you are selling a sofa, just reply “the spy lives on the floor above.”

Coming In Or Getting Out?

That universal vigilance plus the Berlin Wall ensured that no perpetrator would sneak in. We were bewildered to find out later that the guards and The Wall were supposed to stem the outbound flow. And that the celebrated border guard commented once: “If only you knew in what direction they were running.”

Someone said that one only believes in what one is himself capable of. Let’s not forget that Lenin spied for Germany during WWI, Stalin for okhranka (the Tsarist Secret Service), and Hitler against the Party he subsequently took over. And look where it got the people they led.

The subject of spying has not entered my mind since those long-gone days. I don’t even like spy mysteries. But in the last few days I learned of two least likely candidates who did become spies, Moe Berg and Ernest Hemingway.

The Life and Myth of Moe Berg 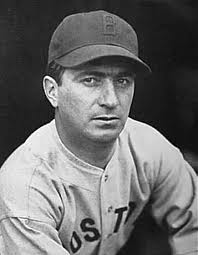 I know nothing about sport but a friendly self-appointed baseball historian told me that so much about Moe is uncertain that one should prefix every statement with “allegedly.”

Moe Berg was a rare bird in the major league: a graduate of Princeton and the Columbia Law School, a linguist, a Jew, and a CIA spy. His baseball record was rather poor. What languages he knew, how many, and how fluently is difficult to ascertain. Moe was friends with Babe Ruth and Lou Gehrig, met Joe DiMaggio, the Marx Brothers and Albert Einstein. He was a recipient of the Medal of Freedom. And his is the only baseball card displayed at the CIA Headquarters. 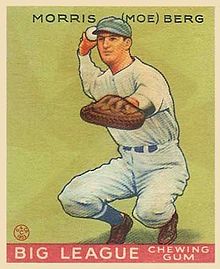 Baseball Card of Moe Berg on display at the CIA Headquarters. Photo from: https://en.wikipedia.orgwiki/Moe_Berg

There seemed to have been reasons for that last fact. On a pre-WWII trip to Tokyo with other baseball luminaries he invented a ruse that let him film the city from its tallest building. The skyline showed military objects, the port, and the railroad. Eight years later, these pictures helped in planning a bombing raid.

The CIA trusted Moe with determining how close the Germans had come to building the atomic bomb. He accomplished that by talking with Werner Heisenberg, a German physicist, in Switzerland. If Heisenberg let it slip that the bomb was near completion Moe was authorized to shoot him. Luckily, he didn’t have to. When President Roosevelt received Moe’s report, he said: “Give my regards to the catcher.”

Reviving the Story of Moe Berg

Recently Moe-the-spy began attracting more interest. ESPN aired a short documentary about him Spyball. His biography The Catcher Was A Spy: The Mysterious Life of Moe Berg became a New York Times bestseller. A movie based on the book is in development. As is an action movie Moe Berg: The Quiet Hero and a new documentary. 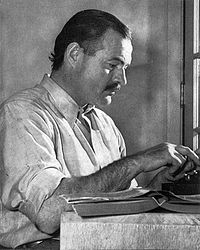 It was disappointing to learn that Hemingway’s name graced the list of KGB agents. But, to my relief, he had never gone beyond acquiring a code name of Argo. Had the Soviet intelligentsia known of that connection in the late 1960s when they could finally lay their hands on his latest books they would have felt betrayed. As it was, he became an instant idol, a symbol of freedom, of freedom of thought, a window to the forbidden world he represented. For a Western author to reach the print press meant that he had proved his pro-Sovietness, but Hemingway didn’t come across as pro-Soviet.

One of his most significant books For Whom the Bell Tolls was first translated for Stalin’s eyes only. The top literary critic pronounced the verdict: “Interesting. Should not be published.” Fifteen years later, Hewingway’s support of Boris Pasternak persecuted for Doctor Zhivago doomed his prospects with the new top literary critic, Khrushchev. For another decade, only secretly translated excerpts of the novel traveled the Samizdat circle.

Even if he met with KGB handlers, even if he expressed readiness to help them, Hemingway remained, by all accoutns, a spy in name, not in deed. A failed spy—that is a consolation.