The Perfect Horse, by Elizabeth Letts 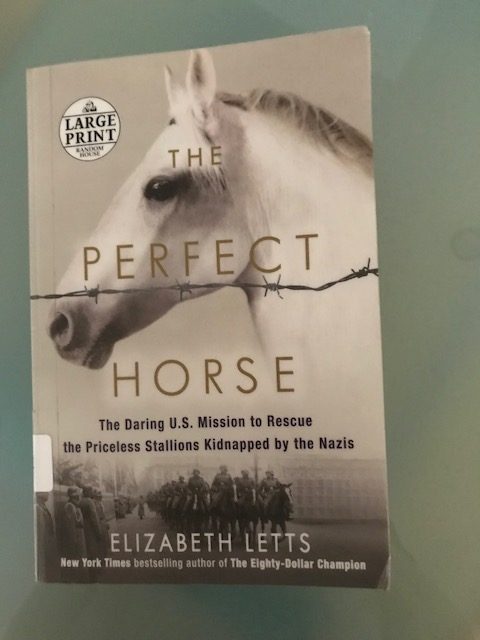 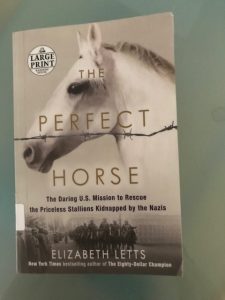 The Perfect Horse: The Daring U.S. Mission to Rescue the Priceless Stallions Kidnapped by the Nazis, by Elizabeth Letts. Balantine Books. 2017.

The full title of this riveting book is The Perfect Horse: The Daring U.S. Mission to Rescue the Priceless Stallions Kidnapped by the Nazis. The essence of it is the epigraph: “Courage is being scared to death… and saddling up anyway” (John Wayne).

Elizabeth Letts’ breathtaking and well-researched story is about a WWII episode that seems insignificant against the backdrop of the most destructive event in modern history in which tens of millions of people, 2.5% of the entire world population, were killed.

In the last days of the war, a small American army unit discovers photographs of beautiful white horses in the possession of a German spy. The Germans have stolen these unique animals from Austria and stashed them away on a Czech breeding farm Hostau. It is located on still German-occupied territory that Allies have already designated to come under Russian control. The Russian army is expected to reach it within days. When it does then, based on its WWI record, it will slaughter the horses to feed its soldiers.

The farm offers to surrender to the Americans as long as they get the horses out of danger. Colonel Hank Reed makes the decision to cross the enemy lines. He knows that his superiors could not officially sanction this mission. Later, he explained why he set aside great risk to save the horses: “We were so tired of death and destruction. We wanted to do something beautiful.”

The rescued horses, the Lipizzaner, were “unlike any others in the world.” Considered the royals of the equine species, they descended from horses bred in Spain during the Renaissance and refined in the Italian (now Slovenian) village of Lipica. A Lipizzan horse is born dark; its coat whitens as it ages while its skin remains dark-blue. The letter L branded on its cheek certifies its pure pedigree. Its right shoulder is branded with the name of the birthplace and the flanks, with the names of the parents.

Following WWI, the Piber stud farm in Austria became the recipient of some Lipizzaner that it branded with the letter P under the imperial crown. They performed at the Spanish Riding School where instruction “was as much a spiritual education as a physical one. 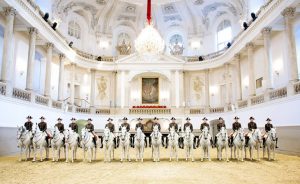 Students neither entered their horses in competitions nor vied for any medals. They pursued perfection as an end unto itself.”  The horses hidden by the Nazi in Hostau carried the letter H pierced through with a dagger—the mark of Aryan purity.

Poland specialized in breeding another group of purebreds, the Arabians. The Bolsheviks nearly destroyed over two centuries of effort by cruelly slaughtering these “playthings of princes.” The Nazi invaded twenty years later, just as the breed recovered. They deemed the Arabians of pure blood and therefore fit to pair with other breeds.

The author brought to life a cast of characters that played central roles in this episode. All of them dedicated their lives to these animals and sacrificed to protect them. And that is where the similarity ends. One could follow the history of the era, both in Europe and the U.S., by following their lives and their choices.

Gustav Rau, the Reich’s chief of horse breeding was fixated on creating a perfect warhorse species by using purebreds from occupied countries. His system resembled the Lebensborn, the Nazi human breeding project where selected SS officers fathered children with selected women at special clinics. “The babies were baptized in a special SS rite, cradled beneath a symbolic SS dagger while incantations pledged that these Aryan babies would have lifelong allegiance to Nazi beliefs.”

Veterinarian Rudolf Lessing, Rau’s assistant, could not ignore the atrocities committed by the Nazi and quickly became disillusioned with the cause. “If the Germans win this war, there is no God Almighty, he thought.” His loyalty was now only to the horses—his ally was anyone who would help them.

Czech-born German Hubert Rudofsky, an expert breeder and Rau’s right hand, became a colonel in the German army.  When the life of the horses in his care was at stake, he joined Lessing’s plan to surrender to the Americans.

Alois Podhajsky, the director of the Spanish Riding School of Vienna and a 1936 Olympic bronze medalist. To save his horses he fled bomb-ravaged Vienna and readily collaborated with the Germans. No horrors perpetrated by the Nazi concerned him, only the fate of his thirty-three white stallions that were a symbol of Austria and an Austrian cultural treasure.

Nazi philosophy, merciless in the human kingdom, taught humane treatment of animals. Nazi Germany was first in the world to outlaw vivisection and to institute animal welfare policies. “Germans lavished money and attention on breeding farms, horse shows, races, and pleasure riding. While human beings were being transported in cattle cars, horses moved about in plush padded train cars, accompanied by grooms.”

The Buchenwald concentration camp had its own “riding stable, a racetrack, and an indoor riding hall” for the entertainment of the commander and his family. The breeding farm and stables at Auschwitz were popular with the SS Totenkopf, Death’s Head, officers who carried out monstrous atrocities.

The Nazi subscribed to the concept of a human pedigree where a true Aryan was defined as a person with documented evidence of four generations of “pure blood.” Some in the American upper-crust society, too, were attracted to the idea of applying the principles of breeding livestock to people which would thus “identify strong and weak bloodlines.”

This “science” was called Eugenics. The director of the Eugenics Record Office proclaimed that human race would improve  “if human matings could be placed upon the same high plane as those of horse-breeding.” The director of American Museum of Natural History was a devotee of Eugenics and an Hitler admirer. He presided over events on “the dangers of race mixing and the benefits of involuntary sterilization.” Unlike in Germany, these theories, however, did not spread in the United States.

The popularity of the Spanish Riding School directed by Alois Podhajsky grew after the war. Among dignitaries who visited to watch the Lipizzaner perform were Queen Elizabeth and Jackie Kennedy. The descendants of the white stallions that Hank Reed saved became world-famous when the Disney movie Miracle of the White Stallions came out in 1963. Robert Taylor played Alois Podhajsky.

Gustav Rau’s career blossomed. Germany acknowledged his contributions by making him the head of the German Olympic Equestrian Committee and naming an equestrian medal and a street in Munich after him. As his wartime pursuits came to life recently, some scholars called for changing the medal and street names.

The role of horses in the army eventually diminished but their history is not forgotten.

The Perfect Horse: The Daring U.S. Mission to Rescue the Priceless Stallions Kidnapped by the Nazis is an inspiring tale of adventure and sacrifice in the times when showing courage and integrity is a heroic act.