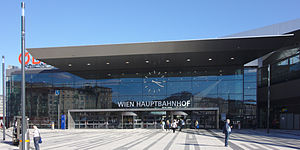 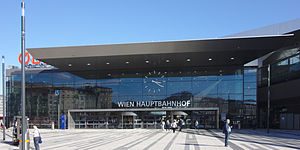 April 21, 1976: Train to Vienna, Austria, with stop in Bratislava, Czechoslovakia.

We shared the train car with the couple with one suitcase. A bottle of vodka unlocked a vacant compartment to store our luggage. Dima and I spent most of the night in it sorting the things we would need in Vienna into two bags, according to HIAS requirement. The rest they would store somewhere until we got to Rome.

On the layover in Bratislava we dipped into our hard currency to feed the girls at the station’s café. The waitress fed us like royalty for only one dollar. The staff surrounded the table and quizzed us, in Russian, about the trick we had utilized to get away from their Big Brother.

As we got up to leave they applauded. One waiter galloped to the platform to bring the stuffed poodle that Polina had left behind and some pastries for the road.

Vienna a couple of hours away, Dima was excited, I was jittery. Czechoslovakia being a branch of an empire, the Maliche would take great delight in seizing and toying with us. 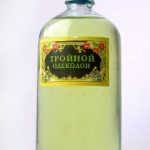 Man’s cologne called “Troinoi.” Used to bribe border control at the crossing from USSR to Czechoslovakia. (Photo from www.savok.name).

The Czech patrol entered the train at the border crossing with Austria to look-see in the bags and under the benches for contraband of people. The officers marched by, each persuaded to ignore us by a bottle of cologne and a chocolate bar Olenka (items identified in letters as anti-search warranty). 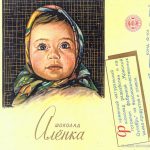 Wrapper from the popular chocolate bar Alyonka (Olenka in Ukrainian). Used to bribe border control at the crossing from USSR to Czechoslovakia. (Photo from www.go2life.net).

The train twitched and crawled pondering which way to go. It stopped to admit the Austrian border control that passed through so quietly that we almost missed it.

Two armed policemen boarded our car (Arab groups protesting immigration to Israel had attempted terrorist acts against Soviet arrivals), a teenager at one door and a middle-aged redhead at the one by us.

Absurdly, that big barrel-chested man who might have been among the euphoric crowds cheering the Nazi Germany’s annexation of Austria thirty-eight years before, brought home the fact that we made it, once and for all.

Taken aback but moved to tears, the policeman sat down with us, rifle between his knees. He showed off pictures of his children and grandchildren and predicted a magnificent future awaiting us. “I thought my boss put the old and the rookies on this duty because it was not important. Now I see how meaningful it is.”

He returned to his post at the door, beaming at us all the way to Vienna.

On that train ride we told Emily that she was Jewish and had every reason to be proud of it. Seven years old, her observations had already taught her otherwise – we carried her off in the nick of time.

As the train approached Vienna I indulged in daydreaming about fresh vegetables at the height of off-season, at least carrots and cabbage. There was no deficit here, everybody said. But milk at noon would be a stretch anywhere.

Four men, two in black coats and hats from Sochnut and two in suits from HIAS, stood by when we got off the train. They asked in Russian where we had decided to go. The couple with one suitcase said Canada; Dima said America. Sochnut walked away. HIAS whisked us into the station.

They spoke English to each other and German to the station staff. The station stunned us with its cleanliness, quietness, a flower shop, passengers with no avoskas filled with oranges.

The men gave us Austrian currency to last three days and a piece of paper with the address and time of our next-day appointment. We found ourselves inside a van driven by a man with a neck wider than his closely-cropped head. An identical van with two men and a German Shepherd followed inches behind.

Encircled by our protectors and the dog, we entered an old five-story building, a former bordello. A lively woman handed Dima a key to a room with a bathroom on the fourth floor. Syuta and Emily had separate beds; Polina would sleep between Dima and me.

“It’s already one o’clock but maybe some store still has milk,” I said uncertainly. Dima left to try our luck. I gave Emily a hardboiled egg, put on the electric teakettle, and set out to make tea for Syuta and some farina for Polina on our portable stove.

Dima flew in, empty-handed but exuberant: “Let’s go! You won’t believe it!” He ignored my resistance and my questions about milk.

We clambered down the stairs and crossed the street. Dima dragged me into a store. Not a store – a palace: bright lights, colorful packages, prettily-labeled jars of every configuration, fresh produce in clean bins where customers were allowed to pick, an entire wall dedicated to dairy. Not one empty shelf. Two cashiers. A few unhurried customers. And carts on wheels to place purchases in. That was what “no deficit exists” meant.

Not sure if we should ask for permission we decided to appropriate a cart. Until we understood what we could afford we would only buy fresh food for the girls and Syuta. Dima and I were perfectly fine with the food from our suitcases.

Pictures of fruit on yogurt containers left us gasping. (We knew the word yogurt from stories about men in the Soviet Georgia that ate it to live to very old age.  But nobody said that yogurt could have fruit in it.) After some deliberation, we chose three strawberry yogurts.

The progress was slow. As I inched the cart forward, a new toy entranced us and I backed up to return to the right place what we had taken before. One of the cashiers started following us watching curiously.

We bought little and took our time to calculate the total then check the change. Nobody yelled at us. “Entschuldigen. Herzlichen Dank! (Excuse us. Heartfelt thanks!)” I said earnestly.

We rushed to the post office for a quick call to Kiev then celebrated our mazel with a thick vegetable soup, yogurt, a pastry, and, for dessert, more admiration of the containers. Syuta intended to keep them indefinitely.

The next day began with a trip to the market. I felt dizzy when my eyes fell on crates displaying rows of chicken livers, wings, breast—a crate for each chicken part.

He gave me chicken livers and he thanked me? “Danke schon, nachste bitte (Thank you very much, next please),” he said through clenched teeth. Dima pulled me away.

Rakhil could not take it in, either, when I called to tell her about the livers galore and a seller thanking a customer.

Everything for the First Time.

The three weeks in Vienna involved tons of paperwork at the HIAS office on the last floor (5th or 6th, I can’t recall) of an imposing building on BrahmsPlatz. 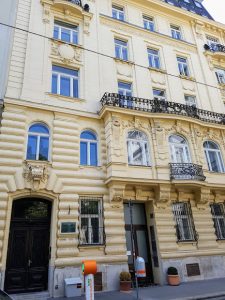 We filled out a parcel order form for Rakhil (in the comments I wrote that she had hoped for a spring overcoat to emigrate in. She got one, emigrated in it, and wore it for twenty-seven years in the United States.) 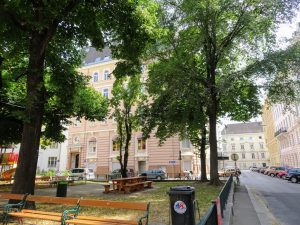 At our request, Emily and Polina were admitted to the hospital for tests. They stayed two weeks. Visitations were allowed. The orderlies put diapers on seventeen-month-old Polina who had long been toilet-trained. We were not aware of non-cloth diapers. It took several days to re-train her after she came home.

The poor quality of film we fought to bring with us made the X-rays useless. Based on the new results, the doctor did not see any reflux to the kidneys. I did not believe him.

In addition to the free room, we received a daily stipend for food and transportation from HIAS. It totaled 98 schillings, or around $10 at the 1976 exchange rate for the five of us. The formula was: 28 schillings for the head of household (we had two: Dima and Syuta because she had lived separately in Kiev and was counted as a separate family) and 14 schillings for each of the rest. We felt rich. Not only was the stipend way too generous but Dima was also  able to get some American Dollars for the ten bottles of vodka and two strings of amber beads we were allowed to take with us (one per adult woman).

(Fast forward a dozen years… Some of the next-wave immigrants we sponsored presented me with an amber necklace. Whether or not amber still appealed to Austrian or Italian women, the rumor was that it was sought for by the Soviet immigrants and inspired envy in the non-Russian-speaking female society.) 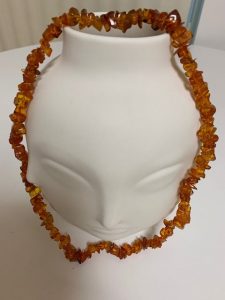 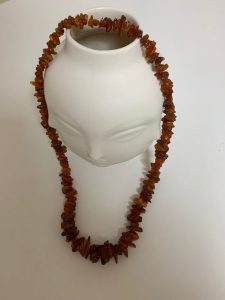 We were surrounded by reality where everything was for the first time. Food abundance and courteous salespeople was the main subject of conversation. And so were pedestrians waiting for the green light to cross an empty street, cordial policemen, and absence of avoskas.

The demonstration on May First did not look like a demonstration: just smiling and chatting people strolling in the streets closed for traffic. No military parade. No military at all. No platforms with waving corpulent men to wave to.

People popped into cafés to have a cup of coffee then rejoined the flow. Or did not rejoin.