The Mezuzah in the Madonna’s Foot, by Trudi Alexy 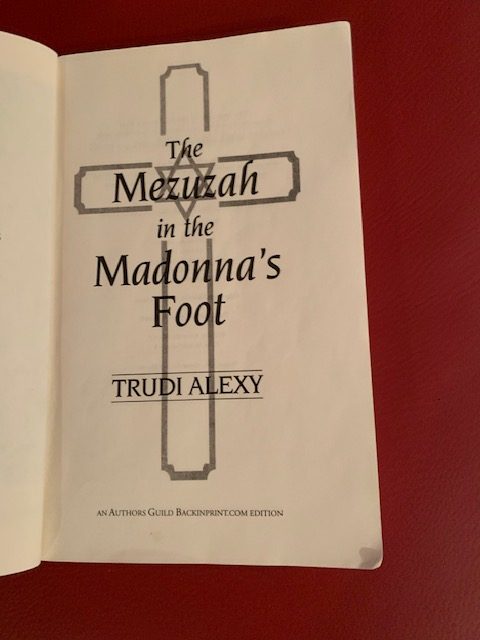 31 May The Mezuzah in the Madonna’s Foot, by Trudi Alexy 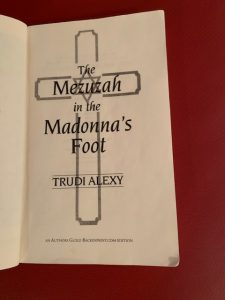 The Mezuzah in the Madonna’s Foot: Marranos and Other Secret Jews: A Woman Discovers Her Hidden Identity, by Trudi Alexy. iUniverse, 2006.

“This is the story of a personal quest, set in motion by an event that happened fifty years ago.” That event in Trudi Alexy’s life was the sudden announcement by her father: “We’re becoming Lutheran… Then we’re becoming Catholic. That way, when someone asks what were we before, we can say Lutheran. After that we are moving to Spain.” Until that moment, 11-year-old Alexy did not realize that her family was Jewish. They lived in Paris then where they had moved from Prague after Hitler’s annexations began.

Unlike her parents and brother, who viewed the two rapid baptisms as the means of survival, Alexy felt like a traitor, a coward, an impostor. In her mind, she forfeited the right to ever call herself a Jew and perpetrated an unforgivable wrong of joining a faith not out of conviction.

The family crossed the Pyrenees Mountains and stayed in Spain for two years before departing for America. Alexy silenced her conscience by losing herself in “the pomp, pageantry, and seductive security of Catholicism.” Despite her misgivings, the country gave her a sense of safety and contentment, she remembered it as a magical place. In the United States, she attended religious retreats and even considered entering the novitiate. But, as the reality of the Holocaust became known, the guilt over surviving by fraud took root. As did the guilt over converting while the majority in the same situation had not.

At the same time, the notion of Catholicism’s purity was wearing thin. People around her, teachers, clergy, friends ridiculed and derided Jews in her presence. She kept her silence feeling that she had no right to protest. Her questions about the history of the Church were considered disruptive and a sign of weak faith. History classes taught nothing about the slaughter and plunder and forced conversion during the Inquisition. They included only vague references to the Golden Age and no mention of the contribution by the Jewish 700-hundred-year presence in Spain.

Alexy had no choice but “to face the difference between what Jesus taught and how his teachings were twisted by his followers to incite crusades, inquisitions, and pogroms.” The remnants of the spell that the Catholic Church still had over her shattered when she applied for dispensation to allow a priest to marry her to her Jewish fiancé. In response, she received “a two-hour lecture detailing the pitfalls likely to befall a good Catholic girl marrying into a Jewish family: disrespect, immorality, blasphemy, sexual abuse.” They were married by a judge and for many years vacillated between non-sectarian congregations. Then, their teenage daughter seeking a denomination that best fit her happened to choose a Jewish congregation.

To Alexy, that was a hand held out to her, welcoming her home. She resolved to connect to roots unknown, to claim a birthright denied, to retrieve what she lost before consciously owning it. Spain remained the answer to her soul-searching – if she was meant to resolve her identity it could only be in Spain.

The Why’s of History

By WWII, Spain was not what could be logically expected from its long history of persecuting Jews as well as all non-Catholics and its established reputation for anti-Semitism. What an irony! In 1492, chased out by the Expulsion order, the author’s ancestors, along with hundreds of thousands unwilling to truly convert, had crossed the Pyrenees from Spain into France or the sea into North Africa or the ocean to discover the New World. Over four centuries later, her converted family crossed from France into Nazi-allied Spain governed by a brutal dictatorship to save their lives.

Why did Spain, in spite of its fascist ideology and economic shambles, served as a sanctuary for escapees from Nazi-occupied countries while anti-Nazi democratic governments ignored the plight of Jews and did not let them in? Why did ruthless Franco quietly accept everyone who made it over the Pyrenees, no questions asked? Why did he direct Spanish embassies in Nazi-occupied countries to save local Jews  and worked with the Red Cross to send food to concentration camp prisoners? Why did he defy the anti-Jewish racial laws and steadfastly refused to submit to Hitler’s demands to return the refugees?

Alexy learned the history of the Marranos, the thousands who chose baptism and, if not burned on the stake for remaining secret Jews, joined the mainstream society, including clergy because clergy had access to Hebrew texts. They named their children Jesus or Cruz to prove their Catholic loyalty. At the risk to their lives many of them went to incredible lengths to hold on to their traditions. After all, “when a Marrano kissed the foot of the Madonna by his front door, who would have guessed that a mezuzah was concealed in the foot?” She also tried to walk in the shoes of the thousands who chose exile and left their homes with nothing but the clothes on their backs.

The author collected stories of extraordinary charity extended to the refugees by ordinary Spaniards and of cautious lives of Marranos in the United States, Catholics to be sure, but refusing to forget where they came from.

The stories of Spaniards treasuring and passing on the fragile memories and mementos of their forcibly converted ancestors are especially meaningful. One physician from a family that produced priests, nuns and bishops has kept a threadbare tallit and a set of phylacteries. He said, “Whenever I am troubled or need help I pray to the Virgin Mary or to Our Savior Jesus Christ or to the saints. I say the rosary and go to Mass. … But if all else fails, I come here… After I try everything, I do this.” He didn’t know the words of the Jewish prayers but his body language recreated its manner, with great reverence. His grandfather taught his father and his father taught him and now he was teaching his sons and hoped they would teach theirs.

The amazing stories and conversations in The Mezuzah in the Madonna’s Foot: Marranos and Other Secret Jews: A Woman Discovers Her Hidden Identity bring home the complexity of our history, all five centuries of it and more.