The Marriage Bureau, by Penrose Halson 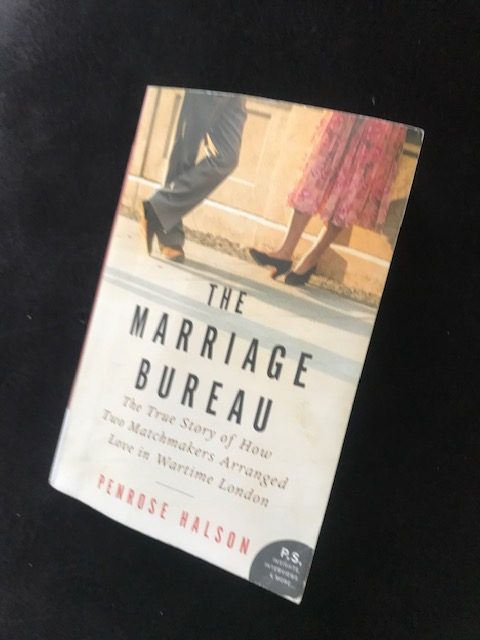 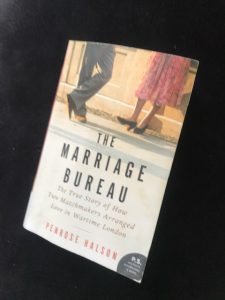 Not Too Old, Not Too Fat

The full title of the book is The Marriage Bureau: The True Story of How Two Matchmakers Arranged Love in Wartime London.

Eighty years ago, on April 17, 1939, four months before WWII began, a new business opened in London. Some mistook it for a prostitution outlet or called it dangerous and useless. The owners, Heather and Mary, called it Marriage Bureau. Their only asset, common sense, served them right: the rules and procedures did not have to change until the Bureau merged with another business in 1992. The owner of that business was Penrose Halson, the author of this book.

I’ll start with the Appendix – 17 pages listing qualities that clients of the Marriage Bureau looked for in their future mates, according to the comments they left on the registration forms. As tempting as it was to present all of the 300, here are a few samples.

The Right Man would be:

Someone who has known loneliness;

No one with false teeth;

Someone born in February or May;

Preferably one who can darn his own socks.

The perfect wife would:

Not a large nose nor flat chest or too talkative;

Not a film actress;

Have looks and voice of a Shakespearean heroine;

Not too old, not too fat;

This list provides such a meaningful insight into people’s attitudes that when you get the book, go to the Appendix first.

The inspiration for the business was the need to help “sad and lonely bachelors” serving in British colonies “to meet, woo, and wed” while on their short leave in England. To Heather and Mary it seemed like an “ingenious occupation” and a path “toward a less subservient, more independent existence” in an era when women had few options beyond early marriage.

To the female clients who lived with family – keeping house, walking dogs, arranging flowers, embroidering linen – marriage was the way to a life of their own. Those employed held poorly-paid jobs: charladies, “lady’s maids, beauticians, shop assistants, nannies and nurses, stenographers and shorthand typists, dressmakers, milliners, cooks, governesses and companions,” a matron at a school for blind boys and men. One journalist declared that women “look upon a man as security… because not only do most women suffer from an inferiority complex, but they are well aware that though they may work as efficiently as two men, they’ll be lucky to get the price of one.”

But men from England were not far behind. Plumbers, “businessmen, farmers, landowners, members of the armed forces, labourers, stable boys, postmen, clergymen, lecturers, waiters, motor drivers, architects and doctors, a traffic officer, an owner of a factory making artificial limbs, a manufacturer of silk stockings, a rat-catcher and cowman in charge,” and  an Earl.

The clients’ stories – their expectations and inhibitions, their mindset shaped by the times they lived in and varied depending on the background, upbringing, experiences and outlook – are absorbing and thought-provoking.

Just on the opening day Heather and Mary received 250 letters. They had to abandon the custom of handwriting their replies that etiquette called for. Soon after the outbreak of the war, the newspapers noted that the Marriage Bureau Inquiries came from all ages and classes.

The war enlivened the mix of the Bureau’s clientele. It now included the French supporters of General de Gaulle; the Poles who escaped to England and joined the Royal Airforce; Australians, Canadians; Dutchmen, Czechs, Austrians, Belgians. And American servicemen. Not American servicewomen though – the official view was that they would not be able to protect themselves when interacting with strangers.

Heather’s and Mary’s good work counted as a reserved occupation, exempting them from the joining the war effort. Their effort to help find hope and love was equated to the farmers’ effort to supply food. Even for the 8 months of Nazi bombing, the Bureau’s business was not affected. On the final night of bombing, 505 bombers killed and wounded several thousand people and destroyed 10,000 buildings. Some Londoners despaired, but many sought love. 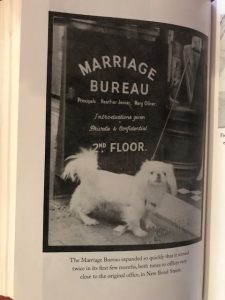 Met at Lunch. Engaged at Dinner. Thank you.

The postwar shortages, rationing, and unemployment had a demoralizing effect. Wives who had worked in war years had developed a taste for independence. Many non-Bureau marriages did not survive the readjustment to peacetime. Then in 1947 “the romance, engagement and marriage of Princess Elizabeth lifted people’s spirits and prompted yet more to seek a spouse.”

By war-end, the Marriage Bureau had over 7,000 names on its books and made almost 2,000 marriages. Eighteen months later the figure rose to 3,000. Many married within a few months, even a few weeks, of introduction. The record belonged to a couple that sent the Bureau a telegram: “MET AT LUNCH STOP ENGAGED AT DINNER STOP THANK YOU.” The haste did not affect quality: “Heather knew of only two couples who had ‘come unstuck.’”

It was only a short step from finding the right spouse to assisting in organizing the wedding, choosing the bride’s trousseau, planning the honeymoon, and acquiring furniture. The office attracted salespeople: “bridal car chauffeurs, makers of wedding dresses and trousseaux, proprietors of honeymoon hotels, hairdressers, fortune-tellers, caterers, photographers, manufacturers of babies’ perambulators.”

Marriages Are Made on Earth

Heather’s first book was Marriage Is My Business. She followed up with Men and Marriage and Marriages Are Made on Earth. She also joined politicians and psychiatrists in public discussions of marriage and divorce. She advised educators, film producers and businessmen on career opportunities for girls. Her Tell Us Your Troubles program led to an advisory column.

Heather and Mary became popular with the media.

Mary co-wrote a book Marriage Bureau. Heather wrote a script for the popular radio program and for one of the first television programs, Picture Page.

A film Marry Me! and a play Marriage Playground were produced. “Heather attended the first night accompanied by fifty of the married couples she had introduced.

Little did Heather and Mary know when they embarked on their “ingenious occupation” that a decade later their Marriage Bureau would be dubbed Cupid’s Friend and a few decades later spouse-seeking inquiries would be done as nonchalantly as ordering gym shoes or pizza.

In The Marriage Bureau you will find an enlightening and entertaining history textbook with a romantic slant.