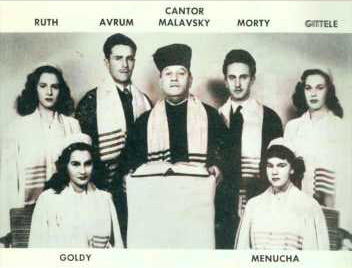 How Many Bushels Am I Worth – A Personal Connection: my grandfather, my dad, my son.

Bena Shklyanoy’s story of her family’s agonizing decision to flee the USSR and religious persecution by immigrating from Kiev to the US in the 1970’s with the help of the Save the Soviet Jewry movement offers a personal connection for me and my family.

Born near Kiev in 1894, my grandfather, Samuel Malavsky was a full-fledged professional Cantor by the time of his Bar Mitzvah – touring all the major cities in Russia. Shortly before his 18th birthday in the early 1910’s he emigrated to New York in pursuit of his own safety and religious freedom.

About the Malavsky Family Choir

As an apprentice of the world-renowned cantor, Yossele Rosenblatt (also from the Ukraine), my grandfather and Cantor Rosenblatt traveled the US performing Judaic concert tours. Over the years, my grandfather would become the cantor in numerous Orthodox communities throughout the US including Brooklyn. When his children (my Uncle Albert; my Aunts Goldie, Trudie, Ruth and Minnie; and my Dad, Morton) grew up, my grandfather formed The Malavsky Family Choir.

Given Jewish Orthodox restrictions regarding women cantors davening in synagogues, my family would appear instead in rented halls and hotels. They first appeared in San Francisco in 1945, and later throughout the United States, performing cantorial music, Jewish and jazz songs both in Hebrew and in Yiddish. Over their careers, The Malavsky Family performed abroad as well, appearing in Canada, France, England, Cuba and Israel. A lifetime of The MalavskyFamily; Singers of Israel music can be found in the Recorded Sound Archives at Florida Atlantic University.

When I stop and think of my grandfather as a young man fleeing for his personal safety to the US in pursuit of religious freedom – and how Bena some 60 years later was forced to do the same – and how today, more than 100 years since my grandfather’s journey, others find themselves in very similar situations, forced to make the very same impossible, life-altering choices to save themselves and their families from religious persecution – I am filled with various emotions of anger, sadness, and gratitude.

Yet, when I see my son (not much older than my grandfather was when he first arrived to New York) taking full advantage of his own religious freedoms while pursuing his artistic passion – and now in the role of Alex – helping share the How Many Bushels Am I Worth timeless story of family, courage, and faith, I am filled with one, singular emotion: PRIDE.

Hope to see you in January 2020 | Providence and Brooklyn. Learn more about How Many Bushels Am I Worth here.

Andy -Father of Jake; Son of Mort; and Grandson of Samuel Malavsky