The Great Escape, by Kati Marton 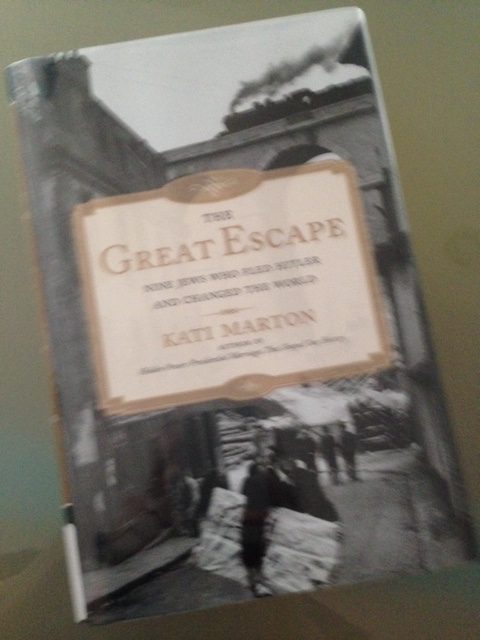 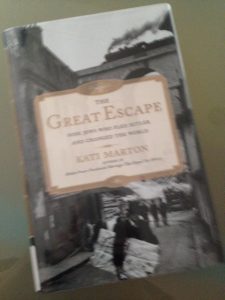 The Great Escape: Nine Jews who Fled Hitler and Changed the World. By Kati Marton. Simon and Shuster. 2007.

All Flags Will Come to Our Shores

The title The Great Escape: Nine Jews who Fled Hitler and Changed the World is not an exaggeration. Four scientists, two photographers, two film directors, and a writer whose life journeys Kati Marton painstakingly researched did truly change history and transformed the world.

To achieve what they achieved they had to leave their families and their beloved city with its inspiring atmosphere. They won’t ever forget the New York Café in Budapest (now a mere tourist attraction.) After crossing borders and oceans armed with nothing but genius and determination, they “were all double outsiders… They were not only from a small, linguistically impenetrable, landlocked country, they were also Jews. (One could argue that, in fact, they were even triple outsiders, since they were all nonobservant Jews).”

These brilliant, tenacious Hungarian Jews who entered adulthood by WWI “were but the tip of an iceberg of talent.” They “collectively, helped usher in the nuclear age and the age of the computer … left us some of our most beloved movies and many of the most enduring images of the violent century they navigated.”

The tips of the iceberg of this and the next generations of Hungarian Jews included a dozen Nobel Laureates as well as supremely gifted not-Nobels. Founders of the Bauhaus architectural movement. Composer Bela Bartok and conductor Georg Solti. Congressman Tom Lantos. Co-founder of Intel Andy Grove. Financier and philanthropist George Soros. Kati Marton’s parents, journalists who tipped off the free world in 1956 about Soviet tanks in Budapest crushing the anti-Soviet revolution. 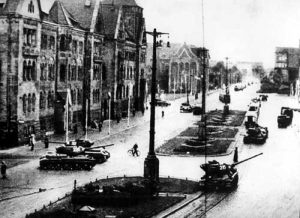 Budapest during the anti-Soviet revolution of 1956. Photo from: http://beatroot.blogspot.com/2006_10_01_archive.html

“One can only wonder how much more potential was trapped inside” that fell victim to the fascist or Soviet terror.

A Country of Immigrants, Fortunately

Leo Szilard discovered the nuclear chain reaction. Obsessed that Nazi Germany may produce the atomic bomb first and disappointed with American complacency, he wrote to President Roosevelt. Thus he prompted the start of the Manhattan Project which led to a revolution in American science.

Edward Teller, “the father of the bomb.” And he provided the theory behind the Strategic Defense Initiative system, dubbed “Star Wars” because he was as anxious about the Soviets as he had been about the Nazi.

John von Neumann, a groundbreaking scientist, the founder of computer science.  He built the first computer for the Manhattan Project.

Michael Curtiz directed Casablanca voted “the greatest romantic movie ever made.” The Rick’s Café in the movie is that New York Café in Budapest that the Hungarian diaspora kept in their hearts forever.

Alexander Korda ran the London Film Productions company. Its first international hit, The Private Life of Henry VIII, “was an all-Hungarian production.” This refugee transformed into a friend to Sir Winstron Churchill and a Sir Alexander Korda.

Robert Capa, voted the World’s Greatest War Photographer. The first photojournalist to go ashore on D-Day and the first photojournalist killed in Vietnam. Recipient of the Medal of Freedom for “exceptional meritorious achievement, which aided the United States in the prosecution of the war against the enemy in Continental Europe from June 6, 1944, to May 8, 1945”.

Arthur Koestler, author of Darkness at Noon, “the first real expose of Stalinist brutality to achieve worldwide fame” and “one of the most remarkable documents of the failed God called communist.” The book contributed, some said, to the defeat of the French Communists in the post-WWII elections. Preparing for the creation of Israel, the United Nations used Koestler’s novel Thieves in the Night as information source.

A Country of Immigrants, Thankfully

The United States and the world have much to be grateful for, perhaps for its very existence, to the Hungarians booted out of the country of their birth because they were Jewish.

What would happen to humankind if the fascist states had valued their human treasure more than they hated Jews?

Would the United States become a superpower without Einstein, Szilard, Teller, von Neumann?

Who would sound a wakeup call about the nature of fascism and communism if not the immigrants escaping that experience?

Would the United States remain a superpower if it did not always have first generation immigrants to spice up the mix in its melting pot?

What if Casablanca was never produced?

The Great Escape is a captivating and enlightening story. And as any story worth its salt it poses questions that stay with the reader long after they reach the last page. Questions that are not easy and have no quick answers. But then we wouldn’t trust promises of easy answers to any question, would we?