The Dreidel I Shall Play 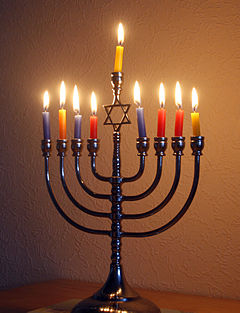 08 Dec The Dreidel I Shall Play 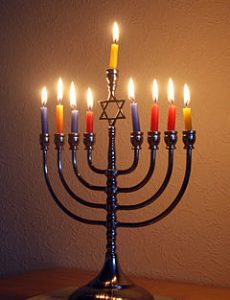 Stores put on Hanukkah displays—matzah, grape juice, gefilte fish. Not Hanukkah fare but it’s the thought that counts. The holiday dubbed “The Festival of Lights” is close!

For eight days, at sunset, we’ll light Hanukiah candles to commemorate the miracle of 22 centuries ago. Jewish rebels retook Jerusalem from Greek pagans and found one day’s worth of oil to re-lit the Menorah but it lasted for eight days. (I used to make seven dinners out of one chicken as a matter of course – but that’s a different sort of miracle.)

I discovered this tradition in the United States. Unless electricity was out, my family did not dare to light a candle, especially in my presence. Teaching religion was a serious no-no. But some did dare. They would make a hole in a large potato, put an oil-saturated cloth in the hole and light it. Abbreviated but  Hanukkah.

Children will spin the dreidel and sing about it–the game was originally adopted from an Irish Christmastime game. 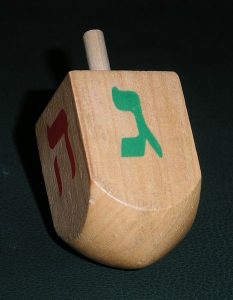 And we’ll eat latkes (pronounced lotkes in the shtetl where my mother was from), potato pancakes fried in oil. It’s either latkes or calorie counting. You could ease the pain and eat them with apple sauce… but they are better with sour cream. 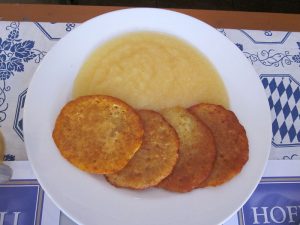 The Yiddish word latkes came from the Ukrainian oladki. Known to my grandchildren in its diminutive form oladushki, it applies to any kind of pancake. So, before immigrating I didn’t tie it exclusively to Hanukkah.

But every potato-loving people has its own word for potato pancakes. In Russian, it’s draniki, in Ukrainian, deruni. Both point to potato-tearing as the method of preparation before the invention of graters.

The last, but not the least, ingredient is gifts. In the olden days, we called them Hanukkah gelt (money) because children received a symbolic amount of money from their elders. My grandmother presented me and then my daughter with 72 kopeks (four times chai, life in Hebrew) each Hanukkah… except I didn’t know what Hanukkah was. Later, in the West, came, adopted from Christmas tradition, chocolate coins, 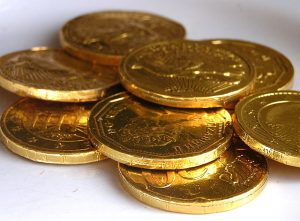 toys, books. I prefer giving non-monetary presents but, alas, my grandchildren, as soon as they grow out of toys, value monetary gifts.