The Bridal Chair, by Gloria Goldreich 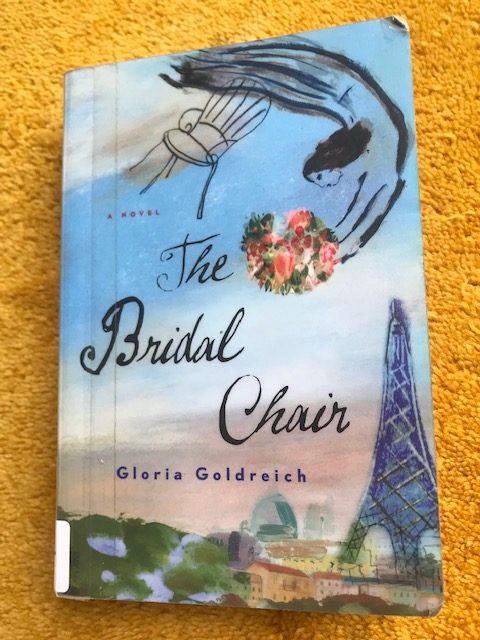 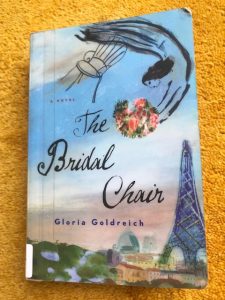 The Chair to Fill

Marc Chagall is one of the foremost artists of the 20th century. His paintings, murals, stained glass windows in the Chicago Art Institute, the ceiling of the Paris Opera are universally admired. But The Bridal Chair is not about his art but about Chagall the man and his family, his wife Bella and daughter Ida.

The painting that gave the book its title was his gift for Ida’s wedding. Cheerless, with little color and an empty chair, it hung over her bed – in Paris, in New York, in Paris again. It was “her anchor, the constant sentinel of her slumber.” It was a symbol of a marriage that had not endured and a life yet to fill with personal ambition. In all the wanderings, Ida never parted with it.

The Chagalls were refugees for most of their lives. First, to Moscow from Marc’s beloved Vitebsk where he was born to “a man who had hauled herrings and a woman who ran a tiny grocery store” from her house.

Paris celebrated Marc until deportations to concentration camps loomed. Ida’s pleas for help to London and New York fell on empty ears. As America held on heedlessly to its immigration quotas, the unstoppable Varian Fry used bribes and counterfeit documents to rescue “the guardians of our civilization,” the endangered writers and artists trapped in Europe.

In the book, he says: “time and again, I have painted a man flying through air. It is myself whom I paint, Marc Chagall, a man without roots, without a home, without a place to rest.” A flying man was a fleeing man.

Can’t Take Vitebsk Out of a Man

The lives of the Chagalls “had revolved around each other and around Marc, the father and husband, who ruled their enchanted world.” Their love for each other was boundless but only until…

Ida remembered the “until” that broke in when her parents declined to accompany their precious daughter to the abortion clinic. Her father, the artiste Parisien, so far above ordinary mortals, never left behind Vitebsk’s idea of respectability – Vitebsk remained “the landscape of his imagination.” And her mother, vague and indulged, played the role of her husband’s ornament to perfection.

Marc Chagall proclaimed his indifference to money – until Ida asked for a commission. Then he was ready to strike her with a chair. His Ida who shrewdly negotiated sales of his paintings, organized exhibitions, managed his finances, sacrificed her own talent and her marriage for his success, to say nothing about salvaging his canvases from war-torn Europe and saving his life.

There were many painful “untils” in the relationship between the imperious parents and their devoted daughter. Eventually, she persevered in saving them, sometimes despite themselves. Varian Fry tells her on the day she extracts them from Nazi detention: “I have no doubt that you will somehow manage. … You are a survivor, … a brave and resourceful survivor.”

And so was Marc. The self-appointed “emperor of art” he accepted tributes and efforts on his behalf indifferently, even grudgingly. He disparaged his benefactors. It would not occur to him to thank or acknowledge their labors. On the other hand, he was most comfortable on the Lower East Side of New York with its herring and brined cucumbers bought from barrels. He recreated Vitebsk everywhere he went.

It’s difficult to look at Chagall’s art the same after getting to know the man behind the art. Gloria Goldreich’s book leaves the reader with many questions.

Does genius come with narcissism attached?

Does genius deserve forgiveness of flaws unforgivable in others?

Is it acceptable for a genius to use his nude child as a model?

Should a genius be a mensch first?

Do you still revere Marc Chagall?

Each reader of The Bridal Chair will ponder these questions and many others but whatever the answers, we’ll see Chagall’s art differently.