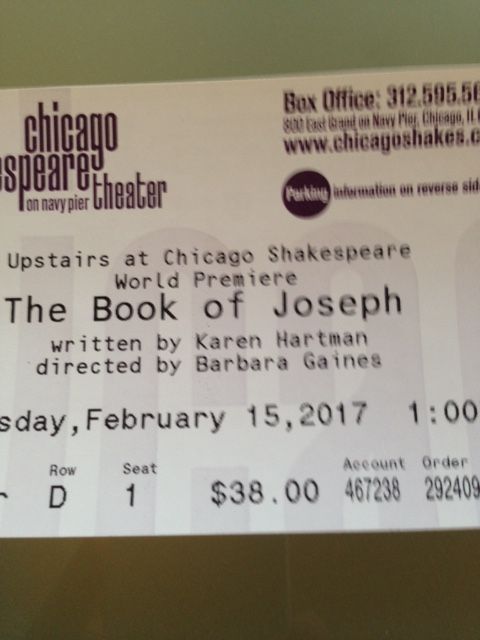 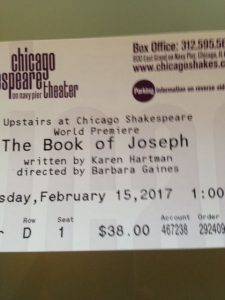 The ticket to the world premiere play The Book of Joseph at the Chicago Shakespeare Theater.

The Book of Joseph

This week, I saw The Book of Joseph at the Chicago Shakespeare Theater, a world premiere play that runs through March 5.  I did not intend to publicize my outing but then, when I think about it, this post is not about the play. Not really.

The play is based on a true story by Richard Hollander Every Day Lasts a Year about his father Joseph’s family. A suitcase full of swastika-stamped letters he discovered in his father’s attic inspired him to explore his family history.

It was fifteen years after Joseph’s death in 1986. The letters came from Nazi-occupied Poland in 1939 – 1942. They were written to Joseph by his mother, his three sisters, their children and husbands.

The Story of Joseph

Two days before the invasion Joseph was able to secure visas to Portugal for the entire family. He pleaded with them to get out immediately. They, however, made fun of his unwarranted anxiety. How could people simply pick up and leave? It’s not like invasions just happened out of the blue, with no warning.

They all perished in the Holocaust. Joseph was the only Hollander to escape it.

Tenacious and resourceful, he explored every avenue, even reaching out to Eleanor Roosevelt, to flee Europe where countries differed only by whether they did not allow Jews to leave or to enter.

400 pages at the National Archives documented Joseph’s struggle to remain in America that did not at the time exactly welcome refugees running from the Nazi, either. Many times he was on the verge of deportation – bureaucrats followed the law conscientiously. Even when Joseph enlisted, the army told him that he should serve in the German army because he spoke German. And he did get to Germany but as an American GI.

The Story of Joseph and Me

As much as the The Book of Joseph performance captivated me, my mind played out my family’s escape (aka Soviet emigration) parallel to the scenes on stage. We shared the skill of dodging the attention of the censors. Joseph’s family wrote about wardrobe changes to inform him of yellow stars they had to wear on their clothes. I weaved information needed to generate invitations to immigrate into letters discussing the weather.

The belief that one could prepare for a point of no return or schedule it at a convenient time, united the non-Josephs. They fused with their homes, valuables, careers. Joseph’s mother would not part with her furniture; my neighbor would not part with her crystal vases. Tragically, there is no room for common sense or sanity, for that matter, in inhumane times.

And then there were the letters.

Letters that keep bonds alive, keep history alive, keep memories alive. They teach history like no distinguished historian could. Letters, brief and ordinary, in a suitcase forgotten in the attic. In them, the day-to-day life of Joseph’s family under the Nazi. Stripped of all rights, wearing the yellow star, confined to the ghetto they tried to remain hopeful.

Letters I sent to a friend in Kiev who kept them in shoeboxes and lent like books from a library. In them, the day-to-day life of off-the-boat Soviet immigrants in America. 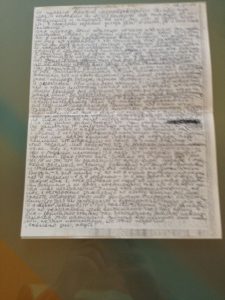 Years later, curious why my friend was so protective about my letters, I asked a visitor traveling to Chicago to bring some. She agreed, provided I make copies and return the originals. I found nothing distinguished in these overly detailed missives. Except that they helped nudge families to the emigration decision and make them a tad more confident and the future a tad less scary. What wouldn’t I have given for letters like these!

You can tell that The Book of Joseph did not end when the curtain fell. I keep comparing, putting myself in the shoes of the Holocaust time, asking myself what I would have done, what Joseph would have done had we switched places.