The Angel: The Egyptian Spy Who Saved Israel, by Uri Bar-Joseph 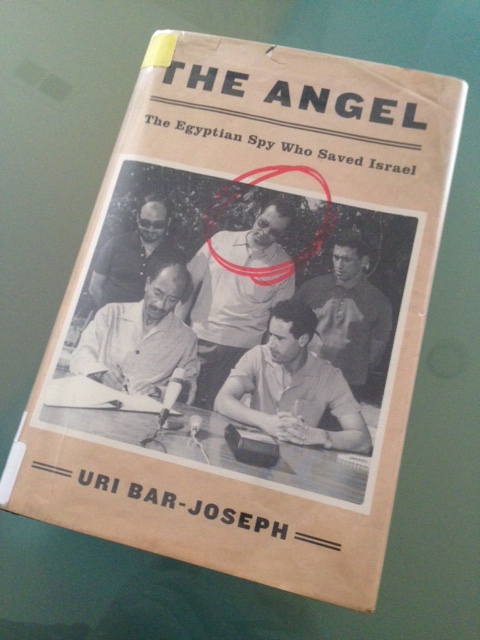 30 Sep The Angel: The Egyptian Spy Who Saved Israel, by Uri Bar-Joseph 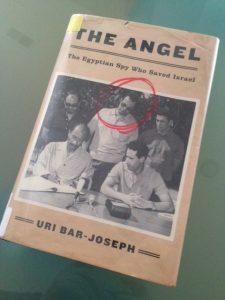 The Angel: The Egyptian Spy Who Saved Israel, by Uri Bar-Joseph. Harper. 2016.

This is a book that would have made a spellbinding spy novel had the events, the dramatic twists, and the characters not been real. Uri Bar-Joseph, an Israeli political scientist, explores the life of Ashraf Marwan, 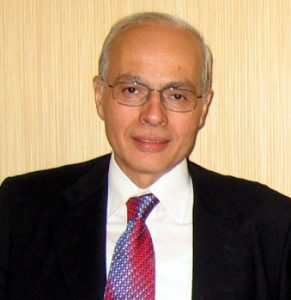 a top Egyptian official who worked for the Mossad, the Israeli intelligence agency. Mind-bogglingly, “the direct assistant to the leader of a country preparing to launch an attack on its enemy was a secret agent on behalf of that enemy.” This book also paints a comprehensive picture of the Yom Kippur War and of the activities, on stage and behind the scenes, of the major players: the Soviet Union, the United States, and the Arab world.

Marwan worked under the codename “The Angel.” Considering that in October 1973 his contribution saved Israel from defeat and potentially from destruction, “The Angel” is no exaggeration or metaphor.

The Angel Is Born

An ambitious young man from a well-to-do family, Marwan married the daughter of Gamal Abdel Nasser,

the iconic Egyptian president. Nasser known as modest and incorruptible disapproved of his son-in-law’s thirst for wealth.

When Nasser died, Marwan’s career took off. And from a great source of intelligence he became the best, the angel. As a confidante and personal adviser of the new president Anwar Sadat 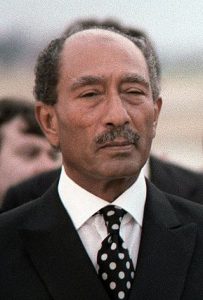 Anwar Sadat, president of Egypt 1970-1981. By Unknown – This file has been extracted from another file: Anwar Sadat and Cyrus Vance.jpg, Public Domain, https://commons.wikimedia.org/w/index.php?curid=1849239

he amassed a large fortune and, providentially for Israel, acquired well-placed contacts privy to state secrets. He was not the only informant that Israel had but he was the most important.

Throughout the book, Bar-Joseph wonders about Marwan’s motives for his decision to spy for Israel. “On the face of things, he was the archetypal Egyptian patriot. In truth, however, he was about to undertake the single greatest act of treason in his country’s history. Precisely why he chooses to risk his life and career in order to help his country’s most despised enemy, in the middle of an ongoing violent conflict that daily spilled the blood of his country’ best youths, is a difficult question to answer.”

In the beginning the reasons for selling state secrets were the desire to get back at Nasser and the need for “a source of income that even Nasser’s intelligence couldn’t discover.” But the continued spying post-Nasser seemed to point to non-financial reasons, possibly an oversized ego. Also, Marwan felt unappreciated in Egypt, in spite of his achievements. Only the Israelis, he felt, appreciated his worth.

To offer his services, Marwan contacted the Israeli embassy in London. However, his messages were not passed along or ignored. By chance, his name was mentioned in passing to a Mossad officer – “It is hard to imagine what history would have looked like had fate not intervened.”

Marwan respected his Mossad handlers and spoke candidly to them about his views and his personal life. He believed that Soviet Union planned to take over Egypt and “revealed his loathing for the Soviet units stationed in Egypt.” Apparently, he did not find it ironic that the Soviets were assisting his country while he was selling it out.

Marwan explained the hierarchy that defined relationships in the Arab world. “The Egyptians are on top. Then come the Syrians, the Jordanians, the Saudis, and on it goes … the Iraqis are at the bottom. Egyptians step on them when they walk…”

Upon learning of his marital problems, Mossad bought a diamond ring that Marwan presented to his wife – the improved relationship “between Nasser’s daughter and her husband was subsidized by the Israeli taxpayer.”

Listen to Your Spy

Marwan made a diligent and conscientious agent. He never misled Mossad. The events on the ground proved how correct and precise his information was. In a spectacular intelligence failure, Israel wasted the time that Marwan gave them to prepare for action because until the last day some top officials refused to take him seriously. It was simply sheer luck that, through friends, Marwan accidentally learned the exact time of the attack. That detail was kept secret even from the leaders of other Arab countries some of whom might have tipped off the enemy. Finally, Israel heeded his advice… several hours before the invasion.

Israel used these several hours for an emergency call-up of the reserves but it took time to recover from the surprise and turn the tide. As a result, “more than 2,500 Israeli soldiers were killed and 5,600 were wounded. This would have been proportional to a loss of more than 160,000 soldiers killed and more than 360,000 wounded in the United States in 1973.” If not for Marwan’s last-moment warning, the consequences would have been far worse and the course of history different.

The Bed of Roses

Marwan went on working for Israel during the cease-fire negotiations. Then, for the rest of his life, he lived in London successfully eluding Egypt’s intelligence services. Many years later, his secret was out. In 2007, Marwan fell, or was probably thrown from his fifth-floor balcony onto a bed of roses under it. The case remains open. Marwan was buried with full honors as a Egyptian patriot. Bar-Joseph reveals the unlikely source of the leak and the reasons why Marwan was not tried in court. In 2009, CBS’s 60 Minutes aired an episode The Perfect Spy dedicated to the scandalous life and death of Ashraf Marwan.

The Angel is based on scrupulous research, expert analysis of events and motivations, and interviews with the decision-makers of the period. But it is not simply a documentary. It is a psychological portrait of people who changed history. That the book reads like a thriller is Bar-Joseph’s amazing accomplishment. If you thought you knew history, Middle East politics, Yom Kippur War era – think again. Better yet – read this book.