The 24 on the Frontline 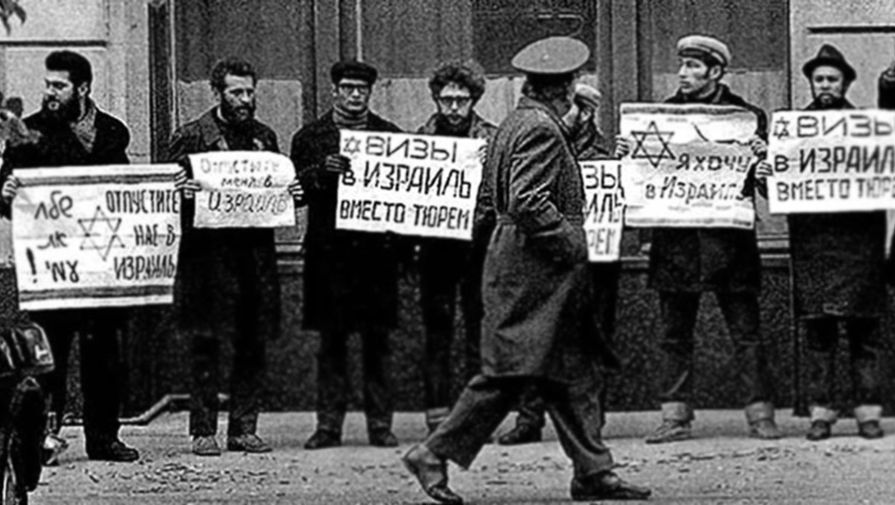 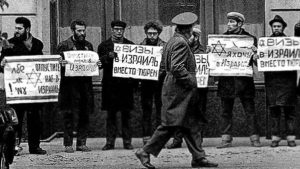 Soviet Refuseniks Demonstrate for the right to emigrate. The posters say “Let us go to Israel”, “I want to go to Israel”, “Visas instead of jails.” Early 1970s. Moscow. Credit: Wikipedia Commons.

50 years ago, on Wednesday, February 24, 1971, at 11.00 a.m. Moscow time, across the street from the Kremlin, 24 people met in the waiting room of the Chairman of the Presidium of the Supreme Soviet of the USSR – the head of government. The 22 men and 2 women demanded to be admitted. It was no coup d’état or an invading army. The 24 were ordinary Soviet Jews, unarmed, powerless, unemployed and unemployable. United by their emigration sagas – already refused permission to emigrate, or prevented from obtaining the character reference required to apply – that day they expected the inevitable: a psychiatric ward or imprisonment, if lucky.

The group was determined to stay until they got arrested or received permission to leave for Israel. Regrettably, except for Efraim Sevela, a screenwriter for popular Soviet films (and a future writer and movie producer), they remained nameless. They stayed there all day and after the 6 p.m. closing time. At 7:30, the deputy chairman of the Supreme Soviet informed them that their exit documents were being processed and gave his assurances that they would not be punished.

The audacious “capture” of the highest office in the land was not extraordinary. At least compared to the eight-person demonstration in the Red Square against the Soviet invasion of Prague in 1968. Or to the plane hijacking attempt by twelve people in 1970. And of course dozens of lower profile protests flared up frequently. Frequently, that is, for a country with a half a century of well honed expertise in keeping tongues fettered. At each protest, all the activists were detained. Information about some of them reached us through the Voice of America reports jammed but guessable.

Times were changing. The USSR coveted American wheat and yearned for respect of the West. So, the unthinkable happened: the Goliath gave in to the demand of 24 helpless, terrified, desperate, heroic Soviet Jews. It even waived – imagine that! – the requirement to produce the dreaded place-of-work character references. Within a week the traitors, visas in hand, were ordered out of the country immediately. They met the condition to renounce their Soviet citizenship without a murmur. Sevela had to turn in his war medal “For Courage” and, along with the others, his university graduation pin. 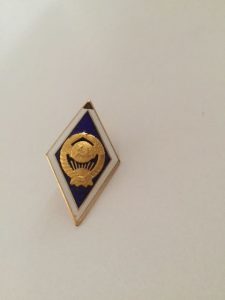 Pin worn by graduates of universities. It is bigger than pins of other schools of higher learning. This pin marks a Masters Degree (Bachelor Degree was not offered). It features the National Emblem of the Soviet Union.

Five years later, in a clear sign of progress, we were allowed to take our graduation pins with us. Obviously, the customs officer first made certain that we had the notarized copies of our diplomas i.e. did, in fact, graduate from institutions of higher learning (progress did not yet extend to letting us keep the originals). The pins became treasured mementos stored in the bank safe next to our American passports.

Whoever thought of making the character reference a part of the emigration application was a genius. You request it by explaining, in writing, that you need it “because of permanent relocation to the state of Israel” (whether you’ll get the permission to relocate is a different story). Now that you exposed yourself as a traitor. you must resign voluntarily – fair is fair. The reason for the resignation goes into your employment record. Which means no employer will hire you. Which means that you have no way to survive. And that you are a social parasite, i.e. a candidate for five years of hard labor, like the Nobel Laureate Joseph Brodsky, for example. Mission accomplished.

It went without saying that the character reference had to be negative because good people did not emigrate. Employers balked at furnishing this piece of paper, nervous that accommodating traitors would not speak well of them. The personnel departments were only happy to see the mortified traitors squirm. The departments of visas gloated. For  Soviet citizens, this treatment was par for the course but when the West learned of it from dissidents and made a fuss, the documents were eventually issued. My husband was described as not worthy but of good moral standing. My personnel manager vowed to supply the character reference over his dead body. It didn’t come to that. Under the pressure from his boss he compiled a portrait of me as a useless ignoramus and not of good moral standing, to boot ‒ definitely, not somebody the Soviet Union should hold on to, just the opposite.