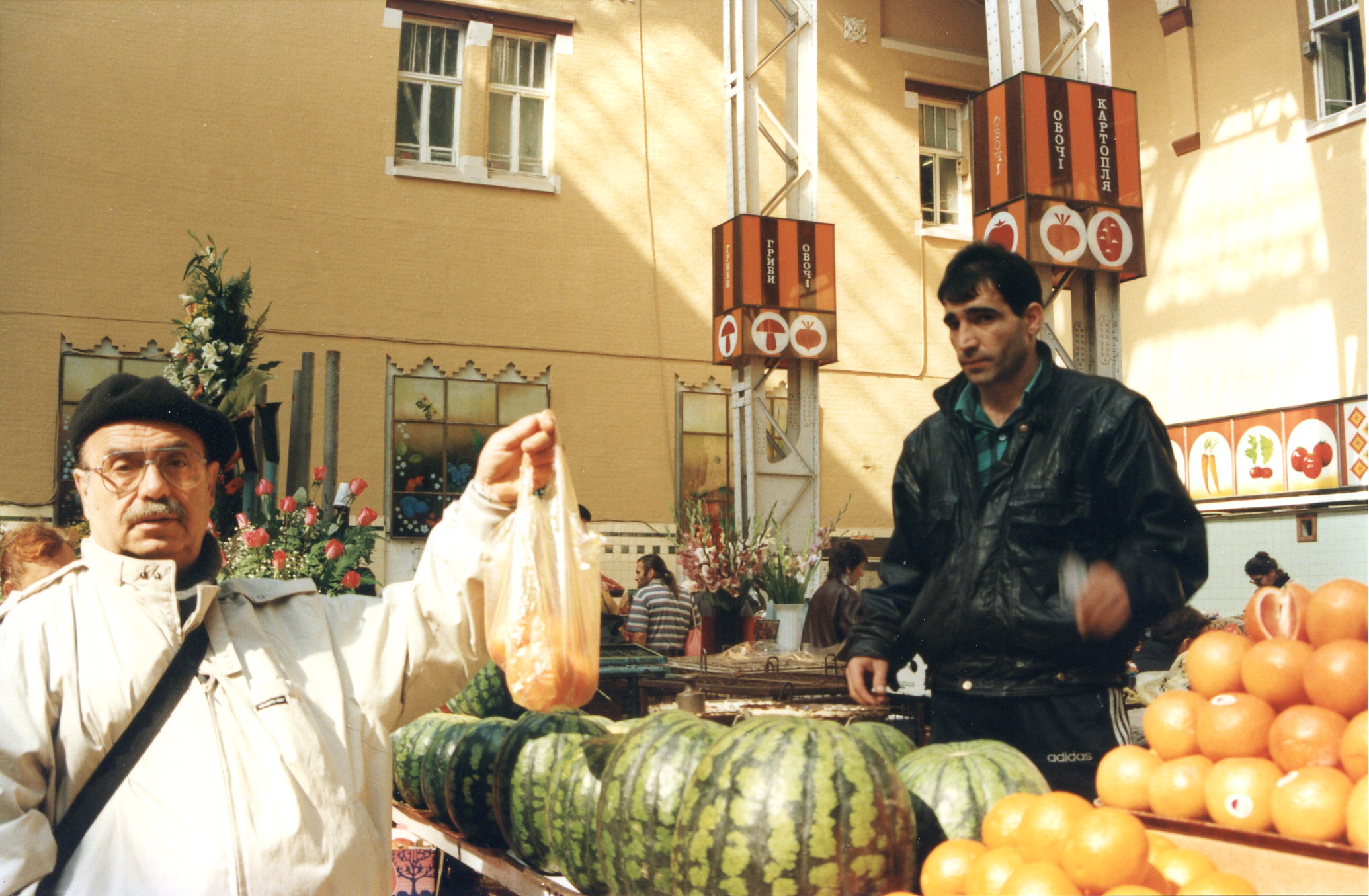 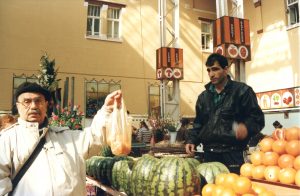 On that first visit to Kiev, every little thing was a lesson for my daughter, Polina, who was all of eighteen months when she emigrated.

Loud and rude sales people annoyed at having customers. Credit cards an unknown. Sandwich-size 8-kopeck bags that supermarkets provided to hold the purchase. Homemade cottage cheese sold from towels spread on the ground next to the bus stop. A street dog in a grocery store sniffing a stand with a dairy product presentation.

And the cemetery that sported deep puddles, no markers or rusty markers lying in the puddles, paths between grave sites overtaken by six-feet-high vegetation, and an indescribably revolting bathroom. Take a look at the “Kiev” photo album on my site.

One evening, a friend’s daughter who was a midwife, snuck Polina, and her camera, into the maternity ward of her hospital (don’t miss the photo album). Oh, the tales any woman who had her children in the Soviet Union will tell you! 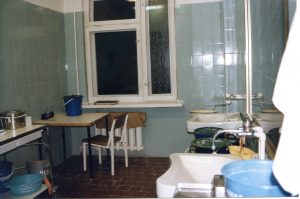 Polina returned from her expedition in a thoughtful mood. She was impressed by the cleanliness – this was good news; my experience was quite different – but stupefied by the number of rags, pails and basins. “The rags look stained and laundered over and over again. And they dry on radiators,” she added nervously.

We went to the famous Bessarabka market, its counters empty except those occupied by Georgians, the enduring entrepreneurs of the Soviet Union and, it appeared, of the post-Soviet Union era. They displayed watermelons and citrus as unaffordable to locals as caviar.

To the awe of the small audience, we bought a plastic bag from one of the middle-aged women standing next to these counters and filled it with tangerines. 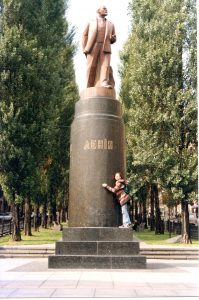 In a nod to touristy sightseeing, we stopped at the grand statue of Lenin (removed in a riot sixteen years later) across the street from the market. Polina posed hugging the pedestal. And so she should have… in gratitude for not experiencing his legacy.

My daughter remained silent, hopefully going over our stories that had no logic behind them. Only at the central department store did she perk up as if finally recognizing something familiar, “Salvation Army store!”

We showed her the central synagogue that in our time had been a puppet theater but had recently been returned to the Jewish community; the university I went to; the daycare center where her older sister had gone.

Then we knocked on the door of the apartment where we had lived. The lady of the house invited us in. Polina was incredulous at the absence of a sink in the lavatory or a shower in the bathroom and aghast at the sight of the water heater mounted above the head of the tub. The hostess, however, sang praises to the heater: her friends came over to take baths because the city’s hot water service was unreliable.

Our balya, as indispensable as ever, hung where we had left it, on the same wall, on the same nail. My husband received heartfelt thanks for the storage spaces he had created and for the remodeling done twenty-five years before.

“I thought you said we had a nice apartment,” my daughter opined.

She just spent a week in a life that could have been hers.  She was not looking for logic any longer—case closed.