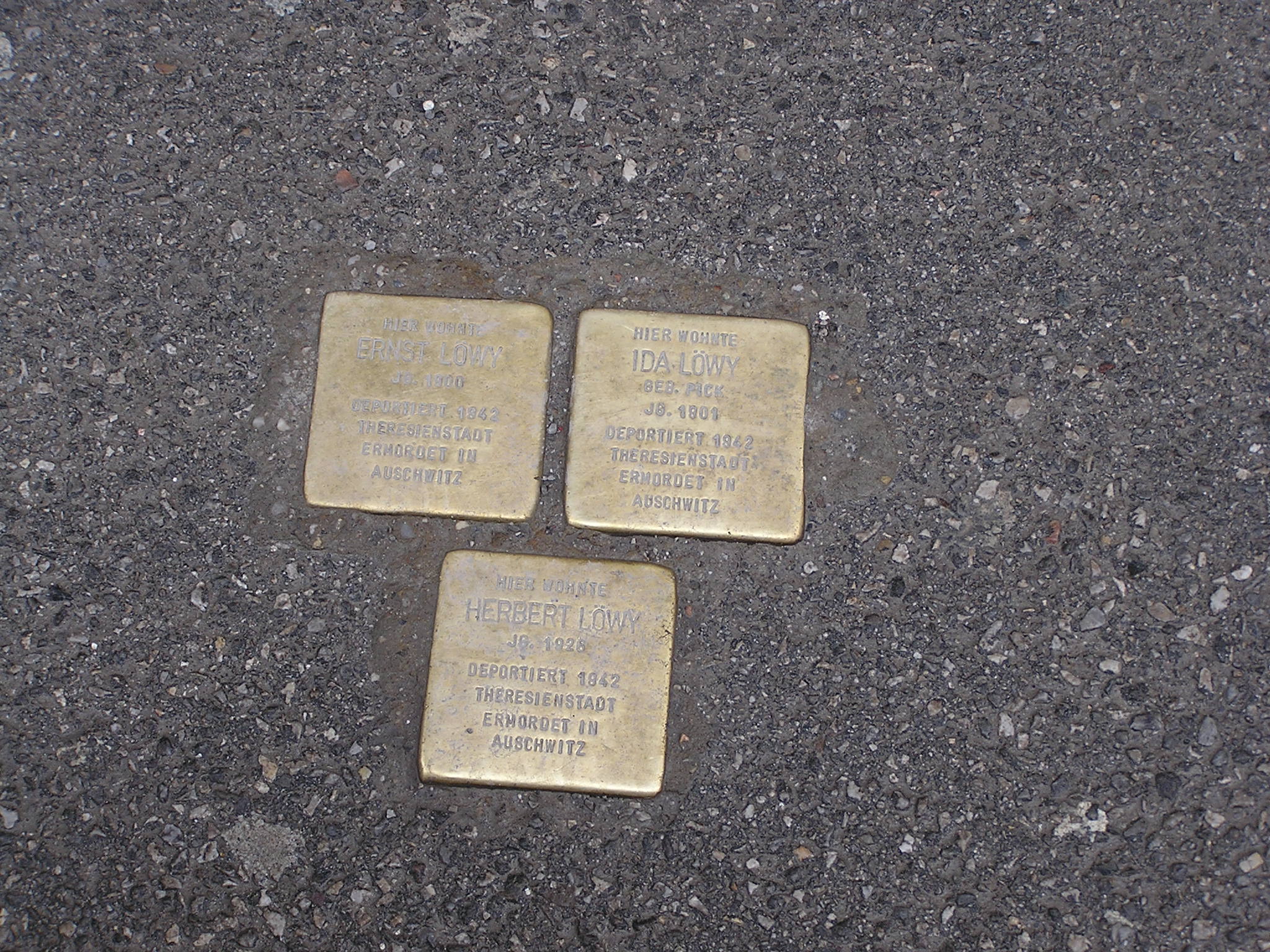 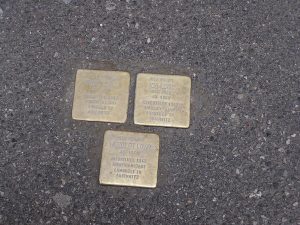 –Cobblestone-size memorial block done and installed by hand in front of the building from where a victim of Nazi persecution was led away to a concentration camp. The brass plate on the stolperstein bears the victim’s name, life dates, date of deportation, name of camp, and subsequent fate if known. The inscription begins with “here lived” and ends with “died in (name) ghetto” or “murdered (date, name of camp)” or “fate unknown.”

If you’ve been to Europe in the last 20 years you couldn’t miss these brass cobblestones. The German artist Gunter Demnig launched what has become the biggest decentralized monument in the world in 1996 – he calls it a symbolic art project.

Set slightly above the pavement, the stolpersteine catch your toe and make you pause. You can’t help but think that you could have been the one in place of the person who had lived here had you been of the wrong religion or eye color or ethnicity. You can’t help but envision the doomed children, the women, the men. And to wonder what was going through their minds and the minds of the neighbors who had informed on them, the soldiers dragging them out, the neighbors still in hiding.

As Gunter Demnig says, “those who bend down to read the inscription bow to the victims.”

Gunter Demnig placed the first 50 stolpersteine in Berlin in May of 1996; the first stone was for 67-year-old Lina Friedemann. In July of 1997 he installed the first two in Austria, for brothers Johann and Matthias Nobis, Jehovah’s Witness and conscientious objectors.

Each stolperstein remains special to him but the impact of the 30 in front of a Hamburg orphanage was particularly painful: “They were between three and five years old. I couldn’t sleep for weeks.”

The 50,000th Stolperstein was installed in Turin, Italy for Eleonora Levi in 2015. As of April 2017, there were over 61,000 of stolpersteine in 22 countries. They are for all the groups that Nazi had marked for extermination (Jews, Roma, homosexuals, disabled, Jehovah’s Witness, resistance workers), for people of all nationalities with inscriptions in their native tongue. The waiting list is long, already closed until the end of the year.

Occasionally, accidents or acts of vandalism occur. While a replacement is on the way a tall sign goes up in on the pavement so that passersby do not step on the symbolic gravesite like they wouldn’t on a real one.

Each stolperstein carries one name. 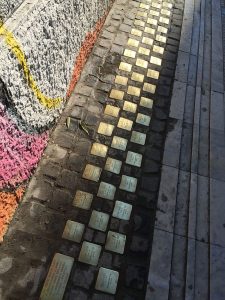 They come alone and in clusters configured in snug groups or in long chess-board-shaped lines, depending on the size of the family and on the number of families taken from a location.

Currently, over 1200 European towns have stolpersteine installed. This list is a history lesson by itself. Germany, Austria, Netherlands host the majority of these memorials. The tiny Luxembourg has over 80, plus a stolperschwelle. The neutral Switzerland has several while France has none in Paris or other large cities.

Russia has a few. As do Poland and Ukraine – though nothing in their capitals. Not on the list, incredibly, Belarus, Lithuania, Latvia that, along with Ukraine (all parts of Soviet Union), took the brunt of the German occupation. I want to believe that their requests are on the waiting list. Or, the subject of keeping the memory of Nazi victims alive may give rise to the debate about Nazi collaboration. It’s best to keep the sleeping dogs lie and the said collaboration believed to be rare to non-existent.

The Last Address in Russia

To immortalize the victims of Stalin’s purges, the Russian journalist Sergei Parkhomenko started a stolpersteine-inspired project called The Last Address. A memorial plaque is installed on the wall of the building where the person lived at arrest time. It bears his or her name, profession, and dates of birth, arrest, execution, and exoneration.

As his inspiration, Gunter Demnig cites the Talmud: “a person is only forgotten when his or her name is forgotten.” Amen!