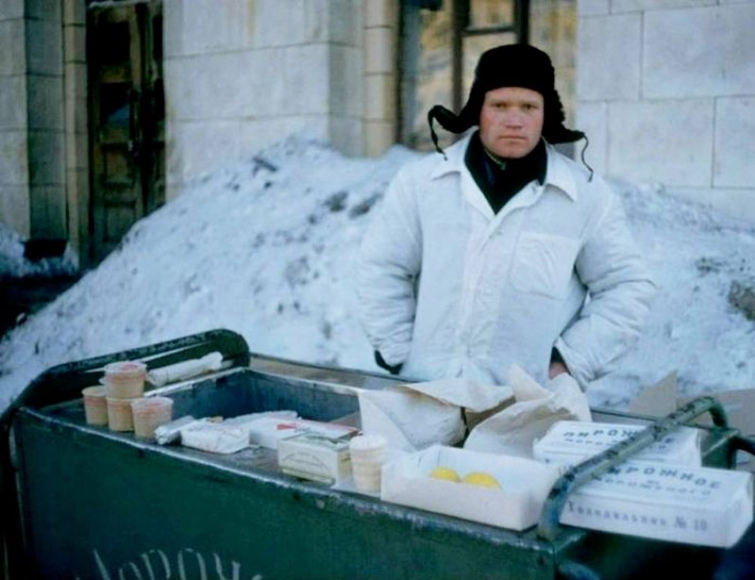 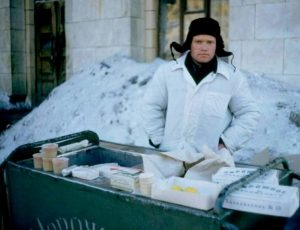 Natural, As in the Good Old Days

This tidbit of trivia immediately opened the door to ice-cream-related memories. There aren’t many but still…

Soviet ice cream, they said, was one of three reasons to visit the Soviet Union, the other two being ballet and circus. The majority opinion sang praises to its “natural, not like now” taste achieved post-Revolution — apparently the murderous Stalin era had its yummy side. As far as I’m concerned, Rocky Road had won my loyalty a long time ago. So, my memories are not about taste. 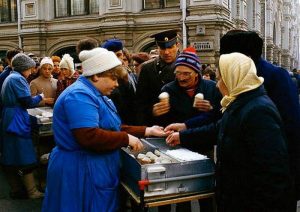 Ice cream entered my life on the rare summer days when my parents had the time to stand in line to buy it and sit on the bench to wait for me to eat it. Eating while walking, let alone licking while walking, was bad manners. 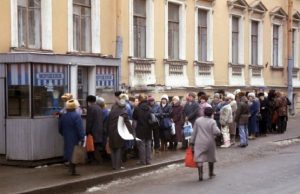 Then came the dating age when ice cream demonstrated the depth of the boy’s affection, to say nothing of his generosity. Fizzy water with syrup to wash down the treat completed his saintly image and boosted the girl’s bragging rights.

My colleague’s father operated an ice-cream stand on the beach. Wherever he worked the rest of the year, he counted days to the start of the summer season. By simply not giving the few kopeks in change to the customers he saved enough to buy everything on the black market. A job to die for. 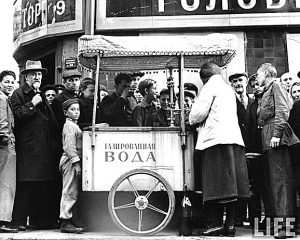 Maybe not quite a money machine like selling fizzy water with syrup but lucrative enough.

The grooviest place for a summer date was the two-story ice-cream café located on Kreshchatik street, the center of Kiev and life. 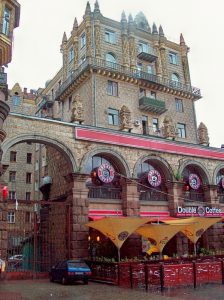 The admiration and respect for your date went off the scale if he managed to elbow out, literally, the many rivals for a seat on the second floor. Only one of my dates measured up. For once, I could feel superior to the couples standing properly in the hopeless line wasting their time.

One of the subjects in the curriculum of Russian Language majors was Russian Folklore. We zeroed in on the revolutionary-proletarian flavor of every fairy tale, saying, and rhyme in the textbook. Hmmm… it seemed that Russian-speaking people had preferred this particular flavor from the times immemorial.

The genre of chastushka, humorous or satirical rhyme, arrived at the end of the semester. Our goal was to determine its socio-political character. Some were obvious. For example, how difficult was it to analyze –

Kulaks and priests are our enemy.

Religion as opium of the people, Lenin’s wisdom of bringing it to light, undying gratitude for the Revolution… blah blah blah.

I adore very much

Not a single student came up with the right verbiage which was: the verse expressed the gratitude and pride of a Soviet worker, meaning not intelligentsia, for being so well compensated that he could easily pay for his lady’s favorite ice cream. And no wonder. The country belonged to him, not to capitalists.

Only If You Promise

And the last ice-cream moment that comes to mind occurred during my trip to the old country with my two non-Russian speaking friends. The year was 2011. A restaurant had replaced the ice-cream café etched in my memory. But next to it, what do you know? – an ice-cream stand  with a couple of umbrella-ed tables!

The cute, blond, cigarette-puffing, bored salesgirl pretended not to see us. I could bet that she was willing us to move on and not make her waste her energy on getting up from her chair. She must have been a toddler, if that, when the Soviet Union fell but she was as Soviet as they come.

I could only see the inside of one half of the stand. Western-type respectfully, I asked what kind of ice cream was in the other half. “If you promise to buy from that side I’ll show you,” she said looking into the distance and letting out circles of smoke. I doubled up with laughter which brought her out of her reverie. I did not laugh at her, I laughed for joy of having left when I did.

When I explained to my friends what had  occurred they were so stunned and bemused that they texted the story to their son in the U.S. right then and there.

The ice cream from the visible side of the stand was just fine.