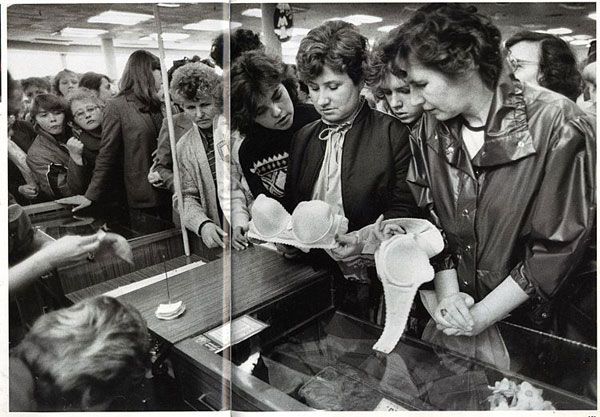 The Idol of Imported Stuff.

Outside school walls, the malicious influence of Western music and fashion on the Soviet culture and the society, in general, grew in geometrical proportion to the din that criticized the parasitical youth for idolatry of the idealess West.

Not to mention jazz—“playing a saxophone is one step away from using a knife.” Not to mention women observed brazenly wearing slacks in public. All of the above weaknesses undoubtedly played to the enemy’s interests.

The currency reform of 1961 brought about more shortages and exorbitant prices for imported goods. The planned-to-death, dull, low-quality Soviet-made inventory fired up an indiscriminate fascination with products originated abroad, the farther west the better.

We owned a Czech-made set of dishes for six, complete with a tureen and four kinds of plates. It took a convoluted blat scheme for Rakhil to get it, therefore we used it on my birthdays and a few extra-special occasions, always with reminders that the dishes were Czech and precious.

The word imported translated to avant-garde, with the capitalist origin on the top of the status pole and almost capitalist, quality-wise, East Germany and Yugoslavia close second. Black suits from France flew off the shelves in a flash; as quickly they fell apart at the seams—these were burial suits.

No stores were privately owned in the Soviet Union; the pricing was centralized. Foreign-made goods, though more expensive than domestic, were not out of reach monetarily and, in theory, required no blat to obtain them.

In reality, the staff set aside the goods for themselves and for customers paying extra or owed favors. They put them under the counter, a location safeguarded from the public like a bank vault. This circumstance thinned the availability drastically.

When the deficit popped up—was “dumped,” in the Soviet vernacular (literal translation: thrown out)—the throngs in the streets reminded Rakhil of the throngs that had surrounded the cattle trains evacuating people from Kiev before the Germans took the city.

Queues formed in minutes and often on the strength of a wishful rumor. If you were fortunate to reach the goodies, you snapped up the maximum of anything, regardless of size, color, or need. A sane person would not ignore a queue, period.

Nothing could reduce the allure of imported goods. A counterculture of stilyagi (style-obsessed) surfaced, too widespread to be persecuted. The Soviet press mocked them but admitted some shortcomings in the light industry and emphasized the need to improve the quality of consumer goods.

These shortcomings bolstered the fuss over pretty clothes and creature comforts used by the bourgeois savages to corrupt young communism-builders’ minds.

The fact that the humdrum Russian valenki inspired a Western designer attending a Soviet fashion show to create fancy women’s boots caused acute embarrassment. The media wrung their hands over the failure of home-grown talent to identify a sure-fire trend staring them in the face. Again, they lamented, the enemies got away with appropriating something that rightfully belonged to the motherland.

Soviet consumers did not need the media to reveal that capitalists or Eastern Europe and even the still-remembering capitalism Baltic republics produced better clothes, shoes, pens, perfume, stereo players and household goods.

The superior quality and variety did not tell the whole story. The vision of the forbidden world behind the item was no less titillating. (For days following the business trip to Yugoslavia by the head and the Party boss of my company, female staff surrounded them in the hallways just to soak in the sight of their soft leather shoes that screamed “imported.” Firsthand details, not-to-be-divulged but freely circulating, of an alien life, namely the striptease they attended with the group’s KGB overseers, were equally tantalizing.)

Luckily, I inherited Rakhil’s indifference to fashion but flaunters of non-Soviet-made clothes were a painful sight to behold for most women.

The awareness of choices and glamor was doggedly spreading to lingerie. Pretty underthings were still an unreachable dream, a mirage hovering beyond the women’s earthly experience full of trauma. How else could it be in a communal apartment… where your body had no secrets that only you knew… where the laundry soaked in a basin in the middle of the kitchen then hung drying in the hallway… where everyone saw every stitch, every darning, every patch, every blemish… where one expected to be watched through the keyhole by the neighbors, the janitor, the militiaman. But at least they now had the mirage.

Pantyhose crossed the border from Czechoslovakia in the late 1960s and, for a long time, they were a deficit and their price astronomical. Even pantyhose produced domestically beginning in 1970s were unaffordable; in 1976, a pair cost four rubles, almost my daily wages. With their remarkable coping skills, Soviet women quickly exposed the pioneering fashion for what it truly was: stockings attached to underwear. So, they did the attaching. And they wore the result proudly. (I acquired my first pair in Chicago… in a supermarket, of all places!) 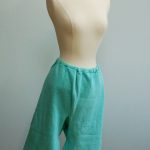 In 1953, coincidentally after Stalin’s death, brotherly China enlivened the tricot palette with bright-colored options. When the relationship soured a decade later, the industry dutifully replaced the now-hostile choices with light brown and shades of grey.

But it was the bra that took the cake in Soviet history. As a matter of fact, its role proved so dramatic that it came up for discussion at a high-level government meeting. The only female at the gathering, the Minister of Culture, made a stir by declaring that she must broach the subject of bras. She even suggested a slogan for the better-bra campaign: “Every Soviet woman has the right to wear a quality bra.”

In all 70 years of USSR, the bra design had never changed, its bell-shaped cups were dubbed “bitch’s udder.” In stores, bras came in three cup sizes: 1, 2, and 3, where 3 corresponded roughly to what we know as C. Other sizes could be custom-made at ateliers or bought at the farmer’s market from seamstresses who made them at home, illegally. Following the Minister of Culture’s revolt, two new designs were introduced, one of them sported lace and was only offered at the central department store in Moscow. 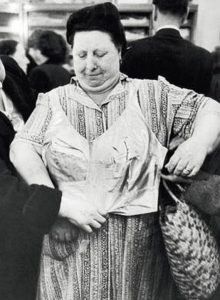 (Less known is the bra’s Gulag connection. The same kind of bra was supplied to the military and the Gulag. But it only looked the same. The enemies of the people received the version with looser seams that lice were happy to inhabit. To reduce typhus outbreaks, the task of cleaning out those seams was one of the tasks in the camps. Supposedly, Molotov’s wife – as the Minister of Fisheries she had introduced canned fish in the Soviet Union – was assigned to it when doing her five years of hard labor for treason (for the record: her husband had bravely abstained from voting in favor of her arrest). She had his position of Foreign Minister to thank for this plum assignment. Hence the joke “the husband in Kremlin, the wife in jail” (it rhymes in Russian).  Apparently the irony of the situation was lost on her: when released from camp she inquired after Stalin’s wellbeing and fainted when told that he had recently died.

A silk bra, repeatedly sewn and mended, “served” a term of 17 years. “It was probably the only one its mistress had owned, and all these ‘scars’ are traces of its salvation.” https://gazetaby.com/post/chtoby-vshi-zavodilis-i-tozhe-rabotali-na-sovetsku/179922/

If the Gulag guards confiscated the bra it was a tragedy, a torturous scenario crushing a woman’s spirit. If they didn’t, mending and re-mending it remained her top priority during the entire incarceration. The scars of mending saved the bra and saved her.)

The public bathroom on the main street, Kreshchatik, teemed with frumpy women clutching roomy purses. The more enterprising sellers, on guard against a random militia ambush, waylaid potential customers on the way to the facility. With a practiced glance they appraised their prey’s worth and her degree of aversion to domestic underclothing.

Upon finding a suitable mark, they accosted the prospect with a nod toward the purse and a faint “Czech underwear?” or “German bra?” A pair of underwear that went for a day’s wages passed through many channels, beginning with a sailor or a ballerina traveling internationally and ending in the Kiev public bathroom.

(Yves Montand, a sufficiently left-leaning French singer to perform in the USSR in the mid-1950’s, was bowled over by the ugliness of Soviet lingerie. He purchased a large amount of tricot, bras, and slips somebody called cassocks that found their way onto a Paris exhibit “Underthings they are loved in.” 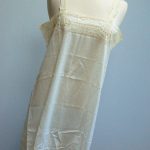 To the French, worshippers of women’s beauty, that collection, though entertaining, proved the inadequacy of the Soviet regime perhaps more persuasively than human rights violations. Needless to say, Yves Montand became persona-non-grata for the purposes of future concerts in the Soviet Union. He put the last nail into his reputation in 1968 by criticizing the Soviet invasion of Czechoslovakia; his records were removed from Soviet stores.)

More flirtatious Soviet-made intimates – with scratchy lace but, still, lace – finally popped up in the 1960s. To improve the quality of the lace, the Ukrainian Ministry of Light Industry acquired Italian lace-weaving equipment. Newspapers showed Party officials observing the luxurious purchase operated by Soviet workers. In a predictable scenario, the Ministry declined maintenance agreements, the workers ignored manuals. Eventually, hammers, the preferred repair tool, turned the capricious machinery into scrap metal. Someone told me that the electronic equipment received from Japan had tags, in Russian, “do not use hammer to open.”

A store dedicated to underclothing opened next to the Kiev’s central movie theater. It was tiny and always crowded. Women were resolutely gaining ground against the dehumanizing lingerie. A renowned Russian costume designer called Soviet underclothing a memorial to the Soviet Union.