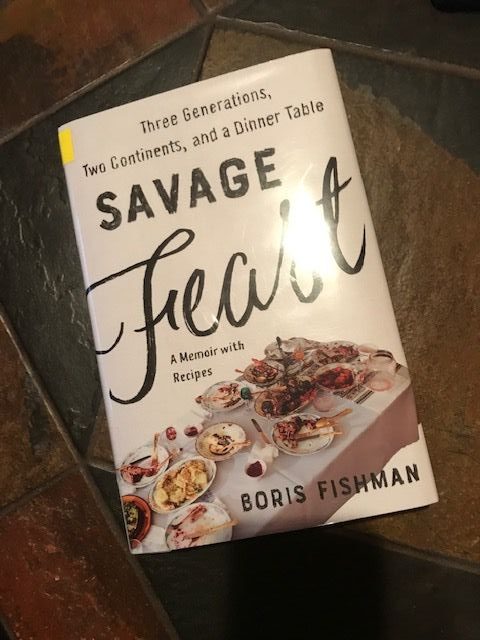 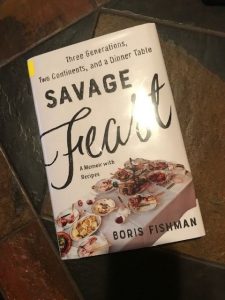 “Made From Secret Favors”

Boris Fishman was born in the Soviet city of Minsk in a family well provided for. He lived a life of privilege. Unlike the closets and refrigerators of the majority, theirs were full. To support that grandeur in a world of miserly salaries, universal shortages and corruption epidemic, his grandparents, a barber and a manicurist, had to navigate a network where the admission criterion was open to anyone who had something to barter—administrators, African students, foreign diplomats, pickpockets, doctors, professors.

“The store called Fruits and Vegetables never had fruit, and only three vegetables—cabbage, potatoes, and beets,” so in a life “made from secret favors,” food was more valuable than money. But in this family, food was also a shatterproof bond, an expression of love, a peacemaker—arguments stopped while the mouths chomped. From generation to generation, the food gene protected the family and held it together. And the memory of famines and Holocaust and black-market scamming was an ingredient in every recipe.

In 1988, the family decided to leave behind their prized stability to save their only child and grandchild “from the further harm of being Jewish in the USSR.” Fishman was 9 years old. Savage Feast is his memoir written 30 years later. The full title is: Savage Feast: Three Generations, Two Continents, and a Dinner Table (a Memoir with Recipes).

“If we are to speak of the things that divide the Russian mind from the American, we could begin here,” the author says of the episode that marked for him the beginning of emigration from the Soviet Union. In the middle of the night, border guards turn on the lights in his family’s train compartment. He doesn’t completely understand what they say, then a whistle blares.

“You come from a people who eat”

The trauma of immigration made food, working on recipes, and sharing meals at the family table even more meaningful. Now legally plentiful, food continued to equate to love and devotion, to anchor him to his roots. It smoothed his painful search for understanding who he was in the new culture. It helped bring the realization that “you did not have to go all Russian or all American. You could pick and choose.”

Readers will learn about the discovery of America by wide-eyed Soviet immigrants, about culture shock at every step and the “high cost of miscalculation” between “the Soviet disinclination to believe and the tyranny of American choice.” It’s tempting to share the discoveries and to explore the high cost but this book deserves to be experienced and savored without spoilers taking away from its flavor.

The dust jacket aptly describes Savage Feast as “a family story, an immigrant story, a love story, and an epic meal.” 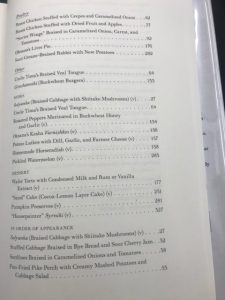 Index of Dishes in Savage Feast (a Memoir with Recipes), by Boris Fishman. Harper. 2019.

The author seasoned the meal with family recipes tucked in lovingly throughout the narrative and obligingly cataloged in a four-page Index of Dishes. Try some.

Savage Feast: Three Generations, Two Continents, and a Dinner Table (a Memoir with Recipes) is one of Booklist’s Must Read Nonfiction picks of 2019.