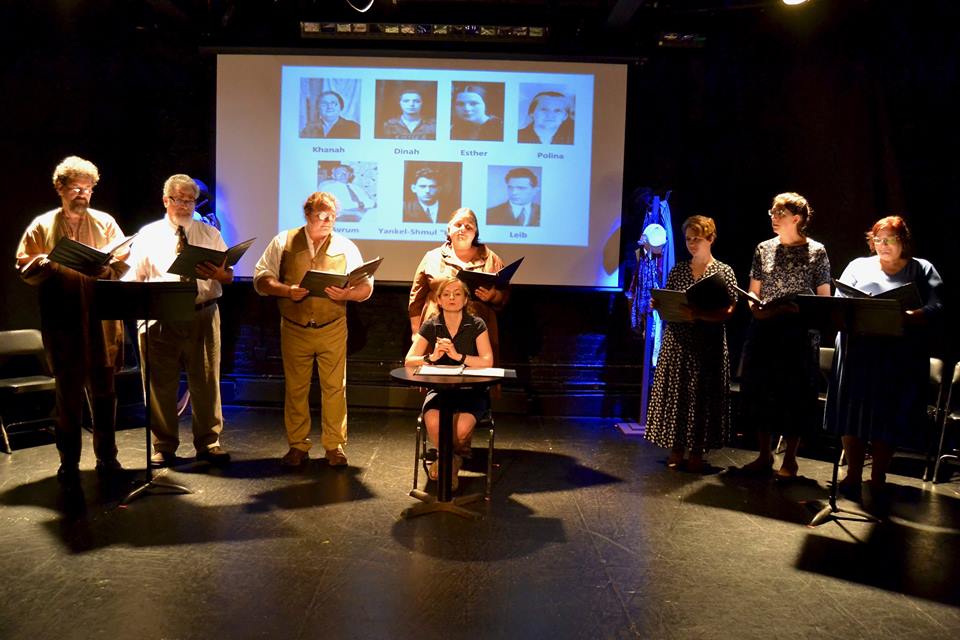 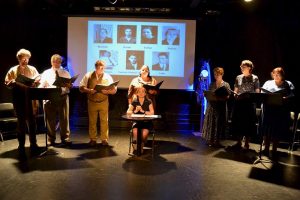 The Apple Does Not Fall: Journeys of a Russian-Jewish Family

WHAT: Present The Apple Does Not Fall: Journeys of a Russian-Jewish Family, with two new plays And Then What? and How Many Bushels Am I Worth? as eyewitness accounts of an ordinary family’s experiences living through the pre-Bolshevik and Soviet eras and then immigrating to Chicago.  A new short film, Cultural Inheritance: Stories of Children and Grandchildren of Soviet Jewish Immigrants* will be screened before select performances.

WHY: Learn what shaped the lives of your parents and grandparents. Remember your own roots. Reclaim the dormant recollections of your childhood that echo still in your actions, ideas, and subconscious customs and beliefs.

HOW: Bena took 11 years to trace her family’s story. It spans two world wars, the Bolshevik Revolution, annihilated shtetls, the Holocaust, the Soviet empire and the large-scale immigration of Soviet Jews to the U.S. in the 1970s.

50 years ago, after the 1967 Six-Day War, the Iron Curtain opened for Soviet Jews. Families made agonizing decisions on whether to stay or go. With the help of many organizations and the dedication of the Save Soviet Jewry movement, tens of thousands immigrated to the United States in the first wave in the 1970s (a second, larger group would not be able to leave for another decade).

The Shklyanoys — a grandmother, mother, father, their daughters (ages 18 months and 8 years) — were in that first group.

Those daughters, now assimilated and pursuing their own families and careers, don’t remember life in the Soviet Union. They don’t remember communal apartments, the long lines for food, or when being Jewish was a stamp on a passport or a reason to beat up a classmate.

Now they want to know their history in order to tell their children.

Bena partnered with Kevin Olson, Artistic Director of First Hand Theatrical to create two plays based on her years of research.

And Then What? debuted to critical acclaim in Providence, RI in 2017. 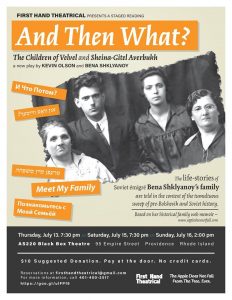 “And Then What” is that rare piece of theater that truly touches every emotion… Captivates from the moment the first lines are spoken.  — Broadway World

The play is presented as Readers Theatre and tells the life stories of Bena Shklyanoy’s ancestors and their influence on Bena.  It places their stories in the context of the tumultuous sweep of Pre-Bolshevik and Soviet history.

How Many Bushels Am I Worth? will premiere this summer in Chicago.

The play takes us on Bena Shkylanoy’s journey out of the Soviet Union and to her new home in Chicago. Painting a picture of her life in the Soviet Union, the play focuses on how it brought her to the decision to emigrate and what it cost mentally and in practical terms to cut the cord. It also applauds the unwavering determination of the Save Soviet Jewry movement in the United States to make that journey possible.

Your Donation is Tax-Deductible

The Apple Does Not Fall: Journeys of a Russian-Jewish Family, is presented by First Hand Theatrical and is a sponsored project of Fractured Atlas, a non-­profit arts service organization. Contributions for the charitable purposes of this project must be made online (click here) or by check payable to “Fractured Atlas”. Any contribution above the value of the goods and services received by the donor is tax-deductible to the extent permitted by law.

Click here for a PDF/Printable version: Apple Does Not Fall-Journeys of a Russian-Jewish Family 2-13.