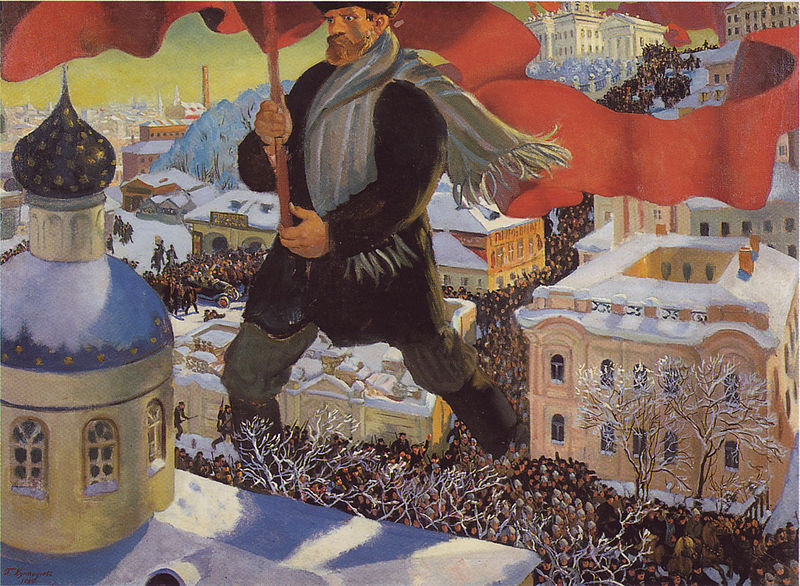 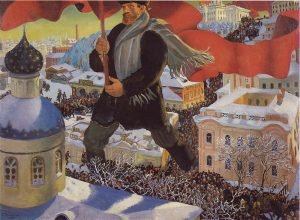 The Bolshevik, by Boris Kustodiev (1878-1927). https://upload.wikimedia.org/wikipedia/commons/7/70/Kustodiev_The_Bolshevik.jpg

A Finger on the Scale

The place was Russia. The day was November 7, 1917 (October 25 in Julian calendar) — 100 years ago! “The workers’ and peasants’ revolution… has been accomplished,” proclaimed Lenin.

He thus put his victorious finger on the world’s scale. Lenin, the brain of the Bolshevik Revolution, the father of the Soviet Union, and the grandfather of every Soviet child. Plus, the faithful pupil of Karl Marx.

(According to my daughter’s kindergarten teacher, as of 1973, Lenin sat in the sky as confident as ever and controlled everything.)

But what is one to do the day after the revolution? Since Marx did not mean (my guess) his theory to go live, his teachings provided no Quick Start Guide that would accompany even an alarm clock. His mission was to point in the direction of the paradise, not to supply a map to it.

So, Lenin and his disciples had to improvise. The results speak for themselves. In 1975, my last full year in the Soviet Union, like every year before, the annual report boasted industrial production far ahead of that in 1913. So there!

To be fair, Marx did lay out key principles of a society where everyone was equal and no one was rich or poor or exploited. They were: a planned economy and government ownership of everything.

With a scraping of carrot and plenty of stick, equality won out in every sphere. 100% employment; 99.9% election results. 99% stood in long queues for every necessity and shared living space with multiple families.

In the process, a new species sprung from the drawing board. It worked more, got by with less, feared their shadow; believed in its superiority; and gulped down corruption, suffering and unspeakable evil in the name of the October Revolution and Lenin. Most importantly, it had identical thoughts. At least those it expressed publicly.

It didn’t hurt that Stalin, the wisest specimen the world had to offer, was always at hand to lead to the paradise. (That opinion of him changed after days of Swan Lake on the radio marked his demise. Lenin, live or embalmed, remained a sacred exception from this rule. Until recently, that is.)

A Hundred Years After

Well, the leader du jour waxes nostalgic about the failure of Lenin’s baby, the Soviet Union, as the “greatest geopolitical catastrophe of the twentieth century.” On one hand. On the other hand though… idealizing a rebellion is asking for a repeat that would, in the absence of royal family, affect him.

Therefore, the Revolution-and-Lenin-reduction surgery must proceed with caution. Various holidays have suddenly sprouted around November 7 that have no Revolution in their names. Rock music seamlessly replaced a military parade on Red Square.

What has the world come to? Could it possibly mean that Lenin’s ideas were not entirely spot-on? Even akin to, as the leader du jour said, “an atomic bomb under the building that is called Russia?” We’ll only know for sure when the next round of Swan Lake arrives.