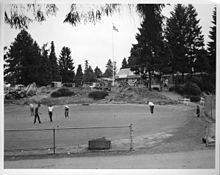 Golf in the Soviet Union? No!

My friend who lives in Seattle told me he felt all-powerful playing golf, particularly at the Seattle Jackson Park public course where Tiger Woods used to play.  He would not say that to anyone but his former compatriot—who else would understand what he means.

Back in the Soviet Union golf meant some sort of exotic game that filthy rich Americans played while hatching anti-Soviet schemes.

Aside from those few high-flyers, America consisted of paupers. Some huddled around manholes for warmth and some toiled in backbreaking jobs but none were golf players, by definition. So, why did not the masses rise up in a Russian-style revolution, you ask. Official answer: because the high-flyers bribed the top layer of the exploited workers and peasants with high wages.

In the early 1980s we learned the mechanics of taking photos of the manhole huddling masses for the Soviet media. A sport reporter friend of ours who covered an international competition in California called us in Chicago in the middle of the night from a payphone. He had just returned from the obligatory trip to the local skid row—the police had not only advised where to go but also escorted him and his colleagues. That was the only time he was able to slip away from the KGB handler who accompanied the delegation in the official capacity of a consultant.

Golf for the Masses

Golf did not exist in the Soviet Union. Neither did sex… if you remember a guest’s statement at the 1980’s Phil Donohue program US-Soviet Space Bridge. But golf really didn’t.

So, when I heard the word golf that day, I first chalked it up to my so-so command of English. Since my arrival 2,5 years before, my ears had stretched obsessively in all directions—anxiety about unscrambling conversations around me and participating in them never left. What if I did not understand when told I was fired?

But there was no mistake, my coworkers were discussing “having a round of golf.” They made more than my 10K a year, but they were no filthy rich. Just regular young men who worked for a living which included training me.

Until that day, golf had not entered my mind. I’m sure it hadn’t entered any Soviet immigrant’s mind yet—we had real problems to solve.

To the best of my ability I explained the Soviet view on golf to my coworkers who looked as though they wanted to check my temperature. Or they might not have understood my English.

Considering how much time has passed since that episode, I peeked on the internet for the current state of Russian golf. The good news is that it is now known in the former Soviet Union. The first course opened in 1987, shortly before the country dissolved. If you are interested, Russia: Golf’s New Frontier? and Historical query: What if Stalin had played golf? offer the history and a psychological explanation of the Soviet golf attitude. Ironically, both titles are questions.