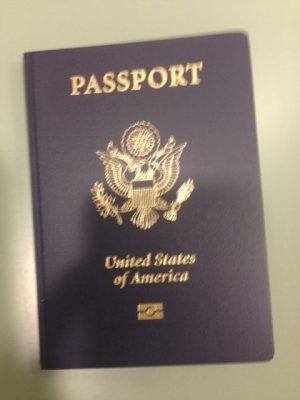 My new passport has arrived. I’m looking forward to traveling outside the U.S. for no other reason than to hear “Welcome Home” again at the passport control booth. The officer who had stamped my first American passport in 1986 said that, and I’ll never forget the gratitude and elation his words stirred.

Nowadays the officers don’t wax friendly or even say anything, for that matter. They compare the photo with the live version, apply the stamp, and train their eyes on the next in line. But it doesn’t matter: I still hear that long-ago “Welcome Home, ma’m” every time.

A passport has a special meaning to me. If you did not grow up in the Soviet Union you don’t know the revolutionary poet Vladimir Mayakovsky. Some liked him more than others but everyone memorized his late-1920s poem My Soviet Passport about going through passport control during his trip to the United States. This is how he interpreted the feelings of the officer upon encountering the Soviet passport (which was quite a rarity):

With what delight
that gendarme caste
would have me
strung-up and whipped raw
because I hold
in my hands
hammered-fast
sickle-clasped
my red Soviet passport.

Then Mayakovsky produces the defiant lines that were etched into every Soviet’s brain:

I pull out
of my wide trouser-pockets
duplicate
of a priceless cargo.
You now:
read this
and envy,
I’m a citizen
of the Soviet Socialist Union! …

The World is Mine! 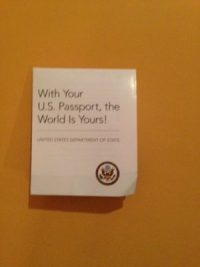 We received our Certificates of Naturalization in 1982 and celebrated with a big party at our just-purchased condo. Appropriately, as we became the denizens of the capitalist world we also became real estate owners, i.e. capitalists.

Twenty years before, Khrushchev had pledged 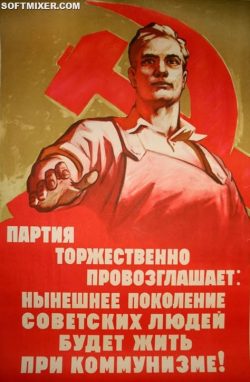 Soviet poster of 1961: “The Party solemnly proclaims: the current generation of the Soviet people will live in communism.” Photo from: https://3vozrast.ru/recomend/159/

Contrary to the advice of my native-born friends and coworkers we immediately applied for passports. Why spend the money unless we planned to travel internationally, they wondered. They took their automatic citizenship so casually. Free to go anywhere, no questions asked, they were not eager to do it – maybe because they could?  My passionate lectures of not taking their life or their freedom to see the world for granted did not impress anyone.

Our first passports arrived in 1983 and we tried them out on a weekend in Canada. Deep in my heart, I pictured the border officers greeting us with applause. They didn’t – their loss. 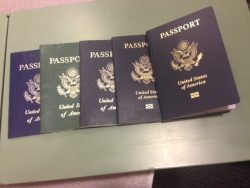 Five passports and many international trips later, I still feel the novelty, the improbability, the appreciation each time I hold my passport. And each time I place it into my bank safety deposit box I peruse all of them feasting my eyes and memory on the stamps of places that, had it not been for the miracle of my emigration, would have remained unreachable, possibly forever.

Recently, I noticed that one of the older siblings of my newest passport had a green cover. Of course, the internet knows everything. It told me that the color had been green between 1941 and 1976 when it changed to blue to welcome me into the fold. And also to mark the U.S. bicentennial. Then green came back for a few months in 1993, just when my passport was due for the first renewal, in a tribute to Benjamin Franklin and the 200th anniversary of the U.S. Consular Service.

I’ve never seen a Soviet international passport but the expression “to travel with a red passport” which meant “special privilege” points to its color. International, diplomatic and other kinds of Soviet passports that allowed one to travel abroad remained the property of the state; between uses they were stored at the appropriate institution.

Red is the most popular of the main passport colors (red, blue, green, black). Socialist-leaning countries choose it and most EU and EU wannabes and some in Latin America use maroon or other shades of red. The blue color symbolizes the New World. It’s common on the American continent. Muslim countries prefer green that was the favorite of the prophet Muhammed and is associated with life.  Some African nations issue black passports and so does New Zealand where this is a national color. 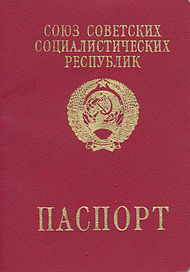 In addition to the obvious information, the Soviet internal passport recorded nationality; current address; marriage, divorce, and children data; and perhaps other details that I can’t recall. Most importantly though, the staples that held it together were made of regular steel that left rusty traces while the passports forged in the West used stainless steel – spies, therefore, stood out. Gotcha!

If you are interested, click here to see a collection of passports of countries that exist no longer. And here are the pictures of all the passports in the world, their ranking and various related tidbits.