Lenin in his study inside the Kremlin, reading Pravda. Circa 1918. Photo from: https://en.wikipedia.org/wiki/Pravda

Pravda was the national newspaper published by the Communist Party of the Soviet Union. The title means ‘truth’ in Russian.

Pravda was founded in 1903 and in the beginning had no political affiliation. It focused on literature and art. It became the voice of the Bolsheviks and then of the Communist Party on May 5, 1912, which was the birth anniversary of Karl Marx.

A number of places, streets, and kolkhoz were named after Pravda. For ex., a town where the mill was located that produced paper for newspapers, was named Pravdinsk. 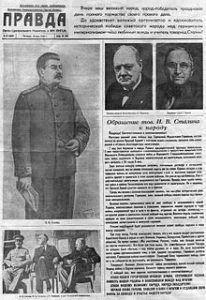 Newspaper Pravda. May 10, 1945. Shows pictures of Churchill and Truman and their note congratulating Stalin (standing on left) with the victory over Nazi Germany. The picture on the bottom is of Stalin, Roosevelt and Churchill in Yalta, Crimea in 1943. Photo from: https://ru.wikipedia.org/wiki/Правда_(газета)

Subscription to Pravda was mandatory for members of the Communist Party and the military until 1989. The Party cells that corralled enough non-communist subscribers to fill the quota were rewarded with hard-to-find books.

Pravda was shut down in 1991, after the dissolution of the Soviet Union. Its staff registered a new paper with the same title and sold it to a Greek entrepreneur who later sold it to the Communist Party of the Russian Federation. During the Soviet era it was a daily with a circulation of millions of copies a day, now it comes out three times a week and has a circulation of one-hundred thousand.