Piecing Together an Identity 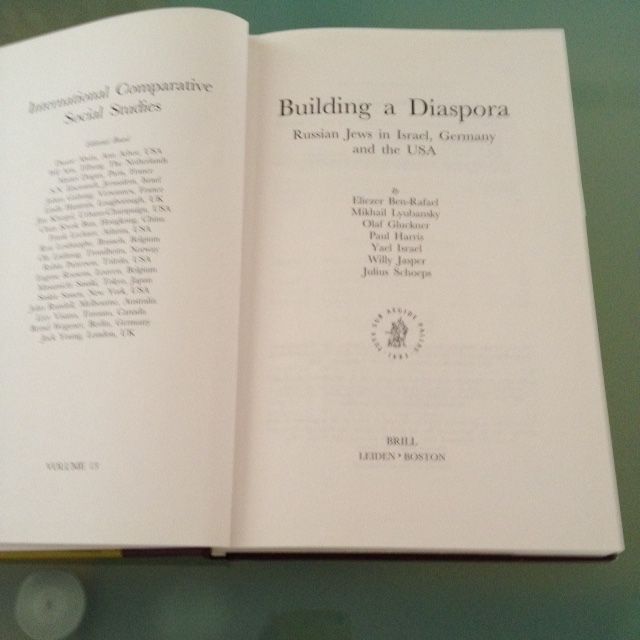 31 Oct Piecing Together an Identity 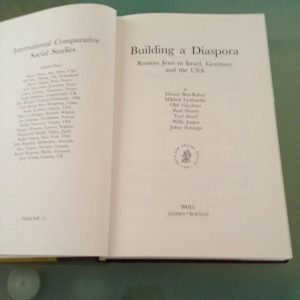 The Study of Us

The book Building a Diaspora and the essay Piecing Together an Identity present the results of a study focused on the new communities of Russian-speaking Jews in Israel, United States, and Germany. It demonstrates that these communities are morphing into distinctive diaspora in their respective new motherlands. This study reminded me of the interviews I conducted with a group of Russian-speaking women.

Not surprisingly, I was especially interested in chapters about the United States co-authored by Dr. Mikhail Lyubansky. Not surprisingly, I, a Soviet Jewish immigrant, felt a personal connection to the topic and drew parallels to my experience.

The book title surprised me. Aren’t Jews outside Israel already a diaspora? It turns out that after emigrating from the Soviet Union we are becoming, even in Israel, also a Soviet (known as Russian) diaspora.

In the Promised Motherland

Near 2,000,000 people, mostly Jews (the only group allowed to emigrate), fled the Soviet Union between early 1970s and late 1980s, minus eight years when emigration almost entirely stopped. About a quarter settled in the U.S.

This emigration constituted an once-in-a-lifetime binary event, if not a miracle, that chronological distance makes more timely and heartfelt. The phrase “Thank God, we escaped” is a commentary on many an everyday occurrence and on media news reports, and a staple of every immigrant gathering—on par with “Next year in Jerusalem.”

This community is difficult to define. Dr. Lyubansky writes that Russian-speaking Jews “are eager to exchange their ‘Russianness’ with ‘Americanness’, ideally without totally abandoning their Jewishness, though not necessarily embracing it either.”

I recall how much we resented being called Russian Jews. The irony of it! We left the Soviet Union because the infamous fifth line in our passports stated “Nationality – Jewish” only to be suddenly considered Russian even if we came from Ukraine or Lithuania.

Our bewildered hosts used words religion and tradition that had nothing to do with our nationality. Dr. Lyubansky quotes a caseworker saying “We expect them to be like our grandfathers.” My American-born cousin admitted sheepishly that she had envisioned men with burlap sacks over their shoulders and women in kerchiefs and long, wide skirts to invade her house.

And no wonder: the contact broke off in the early 1930s when Stalin equated it to treason. American Jewry had no other source from which to picture us but their elders’ memories of the olden days. These memories did  not prepare them for engineers, scientists, doctors asking about opera and architecture.

First things first: the new arrivals concentrated on getting a job; buying a car, a house, and a subscription to the symphony hall; and traveling to the previously forbidden Parises and Londons. Worry about maintaining their Jewish identity, or learning what it was, for that matter, if it was on the list, came last.

Drawing on interviews conducted for the study, the researchers conclude that “a typical mid-age Russian Jewish immigrant who knows very little about Judaism is, nevertheless, attracted by it because he believes that this is the religion of his ancestors. He may simultaneously attend a reform synagogue because it is close to his home, invite an orthodox rabbi to officiate at a Bar Mitzvah ceremony, put up a Christmas tree, admire the Russian Orthodox architecture, and admire Buddhist meditation.”

The study showed that “the issue of personal and family problems and differences in income can be traced to year of immigration and age at time of immigration.”

The immigrants of the 1970s (my family among them) simply took a leap of faith: they had no information, no personal support system, did not know in what city they would end up.

Three generations in a ghetto-state left its escapees unprepared to live anywhere else. They immigrated for their children, not for themselves. In America, men typically expected to work as longshoremen and women, as babysitters.

The local Jewish organizations taught them how to rent an apartment, make a doctor’s appointment, what to wear to a job interview; enrolled them in English classes; introduced them to the phenomena of welfare, unemployment compensation, junk mail; and served as job references.

Building an Identity and a Diaspora

In September of 1976, less than 2 years after the Soviet immigration to the United States began, the Chicago Russian Jewish contingent totaled, per our caseworker, about 500 people. We knew every former compatriot, at least by sight.

There were few seniors because they distrusted capitalists to keep them fed; few people over 45 because they thought they were too old  to land a job; and few small children because no one heard of non-cloth diapers.

Letters to those left behind made all the difference. A year later, the right-off-the-boat crowd contained a large portion of seniors. In 1980, the Soviet Union stopped the emigration. When it resumed in 1987, the newcomers were armed with information and relied on a network of friends. However, many of them were in their late 40s or older and often had difficulty learning English and finding jobs in their professions or at their skill level.

The Russian-speaking Jews in the United States, in Dr. Lyubansky’s words, “are gradually becoming ‘American Jews of Russian culture.’” In a generation or two this diaspora will blur into the mainstream and disappear from the historical and psychological view. More comprehensive studies are urgently needed if we want to preserve this unique history, learn from it, and inform the political and cultural dialogue.

If you are interested in the history and the current state of the Russian Jewish community, you’ll find Building a Diaspora and Piecing Together an Identity enlightening.

I also recommend Dr. Lyubansky’s essay on this community in Germany Out of the Ashes: A new German Jewry?