One Night, Markovitch: by Ayelet Gandar-Goshen 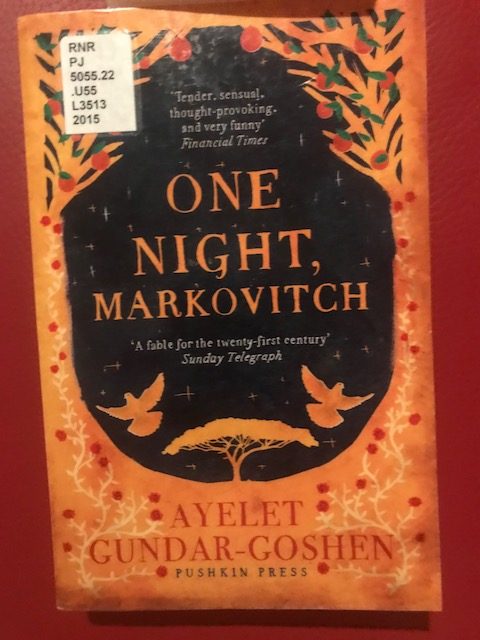 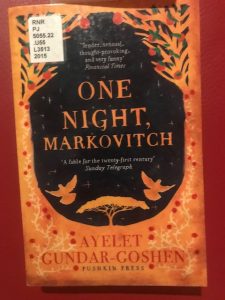 She Will Love Me!

One Night, Markovitch is set in a village in the British Palestine before and during WWII and the Israel War of Independence. It is based on historical facts but it’s about love, obsession and the intrusion of history in personal choices. The book follows the lives of several villagers, among them two close friends, the outgoing, handsome Zeev Feinberg and Yaacov Markovitch, with a face so ordinary that “it never caused a passing glance to linger on it even fleetingly.”

On the eve of WWII the men sail to Europe in a group of twenty to enter pre-arranged marriages that will enable Jewish women to escape Nazi Germany and get into Palestine without trouble from the British.

Markovitch looks forward to rescuing a young woman and having a wife, a grateful wife, even if only for the duration of the voyage. According to plan, the couples are supposed to get divorced as soon as they reach the Holy Land. But, paired with beautiful Bella, Markovitch refuses to let her go. “I’ll wait quietly and patiently,” he tells his friend. “I’ll work hard, I’ll show her that I deserve her. In the end, she’ll love me.”

Bella is as determined to make him miserable. She sleeps with a knife in her bed. He sleeps with her nightdress in his arms. He is prepared to support her child fathered by another man.

Safe physically, the refugees are not able to leave behind their past or forget the experiences of their struggles in the British Palestine. They bear the weight of the “2,000-years-of-exile-and-who-knows-what-is-yet-to-come.” They “always had at their side the Jews murdered in pogroms and tortured to death in the Inquisition and exiled by their governments and slain in the rebellion against Rome… The entire Jewish people crowded around the tables in the café, even when they were empty.”

Markovitch manages for a time to push his past aside. Feinberg lives his past everyday hounded by the vision of an Arab woman and baby he had shot by mistake. His commander has not shaven since he left his old country. Rachel who witnessed the murder of an old Jew in Vienna is stalked by the sound of his cracked skull. Though she forswore her native tongue and only spoke Hebrew she weeps and writes poetry in German – weeps “for all the things she had left behind and were gone forever.”

After the war, both men travel to Germany again, now part of a group that hunts down Nazi war criminals. Some they turn to authorities, to some they dispense vigilante justice. Markovitch surprises himself by resorting to a “poor man’s revenge.” It gives him pleasure not to pay for public transportation, shoplift pastries, bang into other men in the streets, and knock over porcelain cups in cafés to see a waitress kneel before him to pick up the pieces.

Gundar-Goshen’s debut novel tells a heart-warming tale of people, not history, and of the transformation of people while they were founding a nation. Even the obstinate Markovitch has transformed.

Why this title? You’ll have to read One Night, Markovitch to find out.