Of War and Teeth 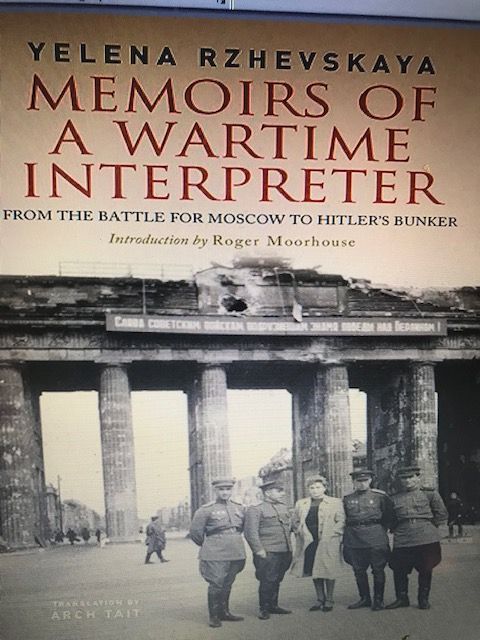 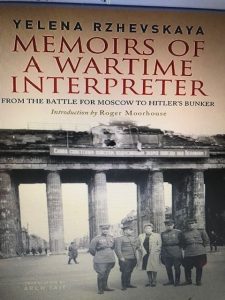 Memoirs of a Wartime Interpreter: From the Battle for Moscow to Hitler’s Bunker, by Elena Rzhevskaya. Greenhill Books. 2018

“God Almighty, is this happening to me? Is this me standing here at the moment Germany surrenders, with a box in my hands containing the indisputable remnants of Adolf Hitler?!”

That was the recollection of Victory Day – May 8, 1945 – by Elena Rzhevskaya whose Memoirs of a Wartime Interpreter recently appeared in English. The box in her hands was “a second-hand, burgundy red box with a soft lining and covered with satin, the kind of thing made to hold a bottle of perfume or cheap jewellery.” It held the Fuhrer’s teeth, the definite proof of his demise that was already a Soviet state secret.

For days, Rzhevskaya carried the box with her around the city so as not leave it out of her sight. She was entrusted with it because, unlike male officers, she would not get drunk at celebration parties and lose it or blurt out the secret.

Working in top secret conditions, Rzhevskaya’s team went to great lengths to positively identify the remains. She also combed through the trove of documents found in the bunker and interviewed witnesses to the events preceding Hitler’s suicide on April 30. His companion Eva Braun agreed to join him on the condition that they marry. So, on April 28 everyone finally began addressing her Frau Hitler, something she had long aspired to. 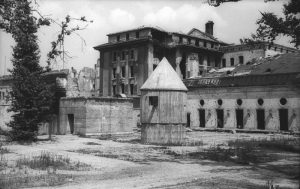 Outside the bunker, anyone trying to go AWOL was executed, including adolescent boys and Eva’s brother-in-law. Inside, the fearless leader focused on stage-directing every detail of his exit and of the posthumous treatment of his body.

But not quite every detail. History saw to it that Elena Rzhevskaya, a 25-year-old Jewish girl from Moscow, a communist and Red Army interpreter, would be one of the first to discover the Fuhrer’s body. And he thought that being strung up like his Italian counterpart Mussolini was the worst afterlife scenario!

Conspiracy theories of Hitler’s getaway to remote shores are still bandied about, including Hilter’s Escape and Hunting Hitler. It was Stalin who had launched the rumor that Hitler may have made it out alive. He hinted as much to the Allies. The Soviet newspapers contemplated this possibility (and they would contemplate nothing of their own free will). Why not? The Fuhrer surely had fans in high capitalist places. Like Argentina, for example. Or Franco’s Spain.

Rzhevskaya recalls that in Berlin “people were suddenly being urged to ‘Hunt for Hitler’. This was a deceitful charade, a weird attempt to disguise the fact that his body had been found, a pretend search… The evidence was being concealed and when, eventually, people would want to… get the real facts, it would be too late… If not at the present time, then at some point in an unclear future this conspiracy of silence would come to an end. It was bound to, so facts needed to be established now that would be unchallengeable even then.”

But for years, those privy to the truth knew to keep their mouths shut. Only 18 years after Stalin’s death did the censors allowed Rzhevskaya to mention it in one of her books. Meanwhile, her granddaughter remembers, she could not find a job, even in a village school… she was Jewish, after all.

At least, Rzhevskaya was lucky not to have been arrested. Käthe Heusermann, Hitler’s dentist’s assistant, was not as fortunate. Before the war, she helped save the Jewish dentist she’d worked for. When he returned toward the end of the war she housed him in her apartment while working at the bunker  – a potentially fatal combination. She did not leave Berlin so that her fiancé would be able to locate her. Days before she and Rzhevskaya met she was raped by Red Army soldiers.

Without Heusermann’s contribution to identifying Hitler’s remains, “Stalin’s plan would most likely have been successful and Hitler, as Stalin wanted, would have remained a myth and a mystery.” Rzhevskaya expected that the humble dental assistant “for her services to history, would be appreciated and rewarded.”

Heusermann received her reward: ten years of hard labor, six of them in solitary confinement in Moscow, the rest in Siberia. She confessed: “by my voluntary participation in Hitler’s dental treatment I had helped the bourgeois German state to prolong the war. While attending to Hitler’s teeth I could have killed him with a bottle of water and thereby done the world a favour.”

History, big and small, is truly an admixture of tragedy, absurdity, and irony.

I’m not qualified to review Memoirs of a Wartime Interpreter: From the Battle for Moscow to Hitler’s Bunker but I had to share this story on the anniversary of Hitler’s death.