Not By Music Alone 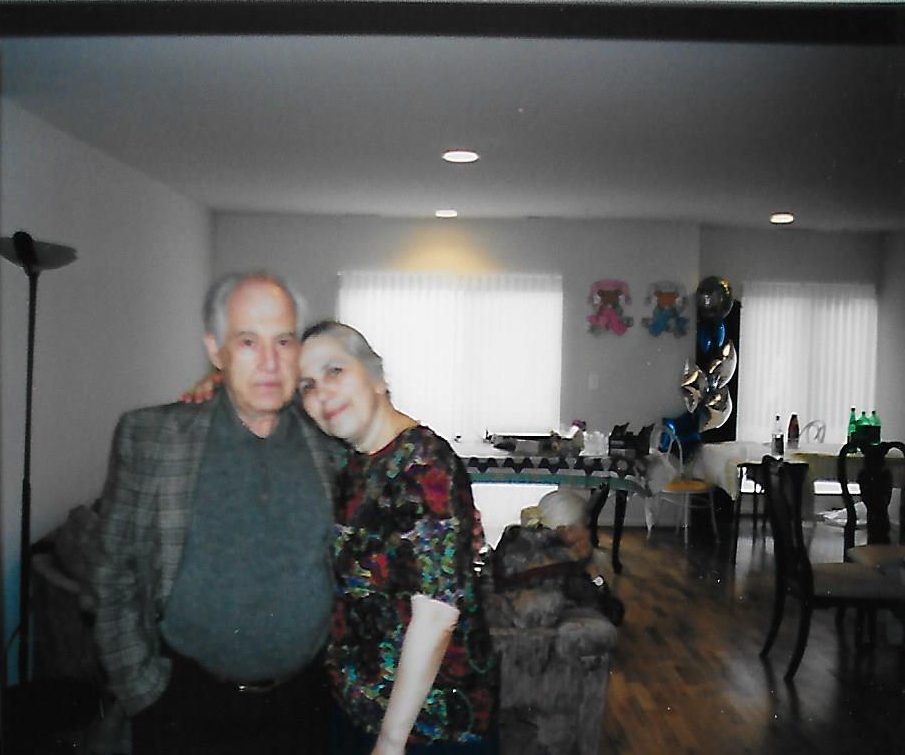 15 Nov Not By Music Alone 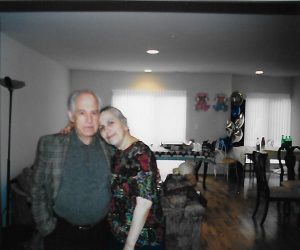 The passing, on October 12, 2020, of Dmitry (Mitya) Paperno, a renown pianist, did not go unnoticed – his obituary and the Chicago Tribune eulogy told his life story with warmth and appreciation. And it’s time to read or re-read Notes of a Moscow Pianist, his memoir translated into English. 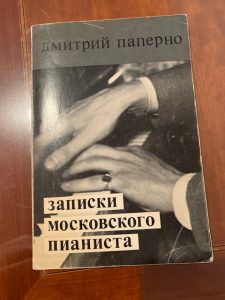 It’s a story of the Moscow musical climate from pre-WWII to the early 1980s and of Chicago in the years after his 1977 immigration. With much hesitation, here is my small non-music-related brushstroke to the portrait of Mitya as I knew him and to the never-to-be-complete picture of 1970s escape from the Soviet Union.

We emigrated in 1976. Mitya’s family from Moscow in March, mine from Kiev in April. With the same interval we enrolled into the English school organized in Rome by ORT. The placement decision lay in the hands of two condescending teenaged immigrants with some knowledge of English. They asked each applicant, very slowly, “where did you come from?” and “what is your profession?” Those who responded went to the advanced class, the rest to the beginners. My “stage fright” qualified as non-response. Why mention that I was a technical translator if I couldn’t say so in English?

I won’t ever forget my first school day. The teacher addressed me when I walked in… she may well have been speeking Chinese. A girl in the first row whispered loudly in Russian, “What is your name?” She kept decoding as the teacher talked: “Don’t worry, this cycle is almost over. Next week we’ll begin with the alphabet.” Why mention that I had translated scientific articles if I don’t recognize spoken words?

During the break everyone spilled out onto a spacious balcony. I stayed behind grateful to be alone. The flair for languages, the only tool in my toolbox, went up in smoke. How will I find housecleaning work in America? And I have to work. Considering my husband’s heart problems, he will end up a handyman and never become a longshoreman, like other male immigrants. According to the prevailing wisdom, these would be the no-fail careers to rely on – and I just lost the chance for mine.

After 44 years, I can’t un-remember that moment or un-feel the anguish.

“Wanna joke?” said a man’s voice. The man was Mitya. One look at him and it was clear he knew how to tell a joke. A joke, aka anekdot – the Soviet social salve, sanity injection, as vital as oxygen. A minute before I was saturated with gloom and now bright colors flooded back. Lifesaving comes in different guises.

Mitya was 47, a pianist (in his words, “well known but not famous”), with a homemaker wife and a five-year-old daughter. They were waiting for entry visas to Canada. Their situation was dire, he said, because he was the only provider and no handyman or longshoreman material.

Canada declined their application. In the record-cold January of 1977 the Papernos arrived in Chicago. At the airport, they asked the HIAS representative for our phone number.

Like most of our compatriots, they rented an apartment in East Rogers Park. Our children played together. We frequently gathered for a meal accompanied by exchanging new-immigrant lessons learned and mass anekdot-telling.

Until his grand piano reached Chicago in April, he charmed local priests into letting him practice on the instruments at their churches. And every day after the practice, Mitya, dispirited and miserable, showed up at our house. Without taking off his snow-dusted coat and hat he collapsed onto the mattress in our living room / master bedroom laying there facing the wall and motionless for a long time. This was his spot for hiding desperation from his family.

My two-year-old younger daughter sometimes escaped my watchful eye to dazzle him with a rendition of one of the long Russian children’s poems in her repertoire. On his better days, Mitya would ruffle her hair and ask for encore. 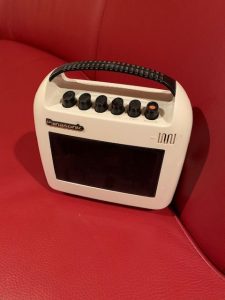 For my husband’s birthday he brought a tape recorder, specifically, he said, to document those performances for posterity. When we protested the extravagant gift, he raised his voice: “Stop it! You guys saved my life.”  Lifesaving is in the eyes of the beholder.

Philanthropists impressed by Mitya’s talent and by letters of recommendations from Russian musical luminaries provided him with useful connections, served as interpreters, and arranged private recitals. Even my husband finagled a few gigs for him. Mitya’s professional future seemed blurry, at best.

And then, miraculously, the DePaul University School of Music announced a competition to fill a vacancy. It attracted 175 contenders. Two finalists emerged. The grand piano chose the rainy day of the final audition to complete its year-old journey from Moscow. Mitya called at the crack of dawn: “It’s here! The stupid movers left it outside, they’re looking for the best way to carry it upstairs. Bring all your blankets. Run!”

I ran. The grand piano sat on its side blocking the sidewalk. Mitya stood, spread-eagled, holding his jacket over a tiny portion of the enormous surface. His clothes were drenched. The blankets in my hands convinced him to trust me with the unrealistic task of keeping the grand piano dry.

Mitya appeared at the final audition with an interpreter. A few weeks later his wife called all his fans and friends: “Congratulations are in order! I’m officially a professor’s wife!”

We had our gigs too, some with Mitya’s help (yes, handyman and housecleaning advice was smart). Gradually, I became a jack of all language trades: teaching, typing, interpreting, translating. We invested into two typewriters, an electric English and a manual Russian. Mitya looked skeptically at the flimsy Russian typewriter.

“If I ever decide to put my memories on paper will this clunker die on me?” he mused every once in a while. The clunker was none the worse for wear after churning out his manuscript. Only changing the ribbon stumped Mitya – he was no handyman material, indeed. 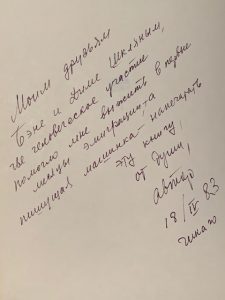 Mitya’s inscription autograph on our copy of Notes of a Moscow Pianist brought tears to my eyes – “To my friends, Bena and Dima Shklyanoy, whose compassion helped me survive in the first months of immigration and whose typewriter helped write this book.” Lifesaving works in mysterious ways. 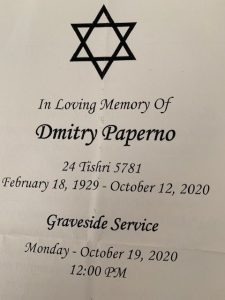