My Value in Wheat 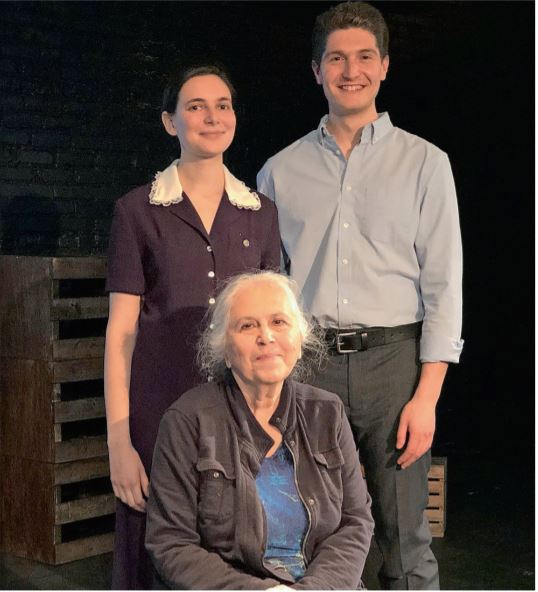 11 Feb My Value in Wheat

In no way is my story of emigrating in 1976 from Kiev to Chicago extraordinary.

Yet some five decades after start of the Soviet Jewish exodus, I find myself overwhelmed by audiences’ reactions to my family’s saga, chronicled in two plays – And Then What? and How Many Bushels Am I Worth? – that I co-wrote with Kevin Olson of FirstHand Theatrical, a Rhode Island-based company. In January, Bushels completed two runs, one in Providence, Rhode Island, the other in Brooklyn, New York.

After the cast took its final bow each night during this East Coast tour, I heard comments from Soviet Jewish émigrés in attendance such as, “You wrote our story from A to Z. The play brought tears to my eyes.” One former refugee actually scolded me in Providence for not bringing the play to Boston, which I took as a great compliment. And theater-goers not personally familiar with any refugee experience peppered me with questions, in a quest to learn more about this crucial period of history that has myriad implications, even today.

The Bena character of Bushels is an “everyman,” and her narrative arc mirrors events in my own life, identical in many aspects to other Soviet Jewish intelligentsia of the 1970s.

My family lived for hundreds of years throughout what is now Ukraine, from the pre-Bolshevik period to the Soviet era. My parents, for instance, experienced the oppressive regime of Stalin; they were constantly afraid – of being reported to the authorities, of neighbors eavesdropping, of “disappearing” from work.

As a child of the Soviet Union, I knew nothing different than communal apartment living and a lack of privacy, winding food lines, and what might be the most insidious reality of all for Soviet Jews: existing as the “other” in the country of our birth.

We knew which universities and companies not to pursue. We learned not to flinch due to comments from neighbors and colleagues about how the Nazis “didn’t kill enough of us.” However, when our children found out about their own “otherness,” we, too, were traumatized. And still, questioning the official government view on antisemitism – that it did not exist – was a punishable crime.

The decision to emigrate did not come easily to my husband and me. Realizing that decision was a lengthy and humiliating process that could shift at any moment, depending on political realities.

The play title How Many Bushels Am I Worth? alludes to the U.S.-U.S.S.R. trade deal of the 1970s that tied the exchange of American goods such as wheat to the release of Soviet Jews. Some 291,000 Soviet Jews were granted exit visas between 1970 and 1988; about 165,000 migrated to Israel and another 126,000 fled to the United States. The joke “How many bushels am I worth?” was our community’s attempt to normalize our situation.

Ultimately, I wanted to leave the Soviet Union to escape the web of falsehoods and hypocrisy. I could no longer lie to my two young daughters about matters such as the “sanctity” of Lenin and the Communist Party. They deserved a different life.

Every person my age from the Soviet Union is familiar with the saying, “Cowards leave, risk-takers stay.” I felt that I was a coward because I was more afraid to remain in Kiev than to face the unknown, outside the Iron Curtain. Only now, many years later, I realize that I was brave; I just did not understand it at the time.

Our actual journey took a period of five months.First, we stayed in Vienna, then were sent to Rome, and finally arrived in the United States. Our three-week stay in Austria provided all sorts of surprises. As I describe in Bushels, “Dima [my husband] drags me into a store. Not a store—a palace: bright lights, colorful packages, pretty-labeled jars of every configuration, fresh produce in clean bins where customers are allowed to pick, and an entire wall dedicated to dairy.” And, they had milk at 1 in the afternoon! We would have numerous “first-time” experiences in the weeks, months and years to come.

On a more serious note, if not for the advocacy of the grass-roots movement to save Soviet Jewry and the efforts of organizations such as HIAS and ORT, I would have not been able to adjust to my new life, much less flee.

Officials from these groups and local Jewish communal service agencies in the United States knew that without their assistance, we would be unprepared for our new lives. They were our lifeline, and we meticulously followed their directions from the moment we arrived in Vienna until we stepped onto American shores and learned to navigate our new culture.

I eventually settled into a vastly different life in Chicago, finding a new circle of friends, a job and a low-rent apartment. My parents soon joined us, and my mother was the 1,000th Soviet immigrant to land at O’Hare International Airport. As a result, photos of my family appeared prominently in The Chicago Tribune and the now-defunct Chicago Daily News. To this day, these images transport me to an earlier chapter in my life.

Again, though, we faced “otherness,” this time as Jews in the United States, our adopted homeland. American Jews who had devoted themselves to our flight and resettlement seemed baffled that we had never heard of Rosh Hashanah and had no understanding of being kosher. Without explanation, for example, an Orthodox family in Chicago slammed the door in my friend’s face when she shared her borscht, complete with bone marrow and a dollop of sour cream. Our Soviet passports may have proclaimed that we were Jews, but we had no exposure to Jewish traditions due to the Soviet position on religion.

Our situation was complicated by insufficient English and ignorance of American customs. Before arriving in America, I pored over the HIAS brochure “Entering a New Culture: A Handbook for Soviet Migrants to the United States of America” crafted by David Harris, now chief executive officer of the advocacy organization AJC. This invaluable publication educated Soviet émigrés about U.S. geography, citizenship and politics; federal holidays and American clothing sizes; and how to address an envelope or ask a police officer for directions. It directed us to tip 15 percent in restaurants and to write the number “seven” without the bar across the middle. Some items in the guide, such as the explanation that Judaism was a religion rather than a nationality, were not immediately understood.

A year later, I was asked to update the brochure.

Only after realizing that my two daughters and, by extension, my grandchildren might never learn their genealogy, much less the Soviet mindset, I began to uncover my family history, a process that took more than a decade. The outcome, chronicled on the website www.AppleDoesNotFall.com, is depicted in our two plays.

These dramatic works are an attempt to preserve my family story, as well as the Soviet Jewish experience. When my children and grandchildren first saw the plays, they had tears in their eyes. My 16-year-old granddaughter said to me, using the Russian word for “grandmother,” “Babushka, we have not blinked once.”

While the plays appear to resonate with Soviet émigrés, perhaps even more importantly, they seem to appeal to diverse groups of refugees, who can also identify with being outsiders. Regardless of their country of origin, all refugees face similar hardships, misunderstandings and anxieties. All of us who had to flee our countries of origin had good reason to do so, even if it is not immediately clear to those in our new communities. One of my greatest hopes is for those who see our plays to examine their own family histories and try to imagine the difficulties of both fleeing a brutal regime and abandoning all that was once familiar.

Here in the United States, where my family and I now live, large numbers of people are either immigrants or descended from immigrants, yet we live in a society that is increasingly xenophobic, making tolerance, compassion and the Jewish concept of welcoming the “stranger,” or in the context of our plays, the “other,” all the more essential.

This piece was written for the German-language Aufbau. Read the published article here.