My Life on Stage 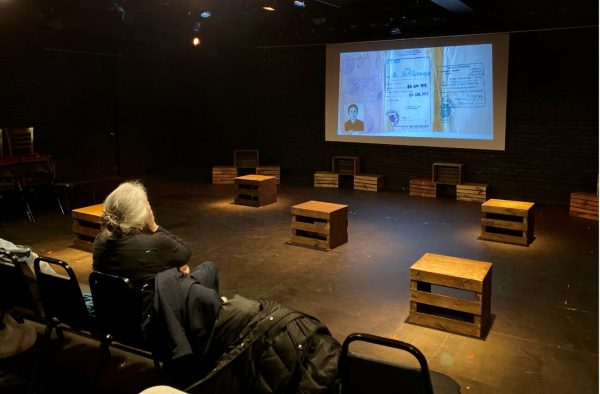 “44 Years Ago Is Now.” Bena Shklyanoy looks at an image of her passport during tech rehearsal in Providence.

“My life on stage” sounds like a title you’d expect on an actor’s or a ballerina’s memoir. A disclaimer: I’m not an actor, not even a ballerina. The title refers to my life literally unfolding on stage in How Many Bushels Am I Worth?

Nearly 44 years lie between the photo of me at the rehearsal of the play in January 2020 and the image of my exit visa from the Soviet Union that opens the play. Outward differences are stark, yes, though the black-and-white (gray-and-white by now) family photos prove that everyone was young, no matter what grandchildren think. But the hope, the fear, the love, the heart squeezes and heart flutters do not age.

What I experienced, along with many others who were in the audience, has not faded into the past or gotten stale. My life story and the themes of immigration and migration are still palpable, and I hope resonate with everyone in the audience, given the conflict and oppressive regimes and refugees still filling the news today.

Between writing the story and co-writing the play, I know it by heart. Of course I do, I lived it, all those years ago. What’s so remarkable, is that that between Chicago, Providence and New York, I’ve seen the play many times… 6 more to go. And every time I’m transported back to that first time all those years ago.

There are still five more shows to go at The Mark O’Donnell Theater in Brooklyn. Get your tickets now.

How Many Bushels Am I Worth