My Kiev Squares, by Marina Brodsky 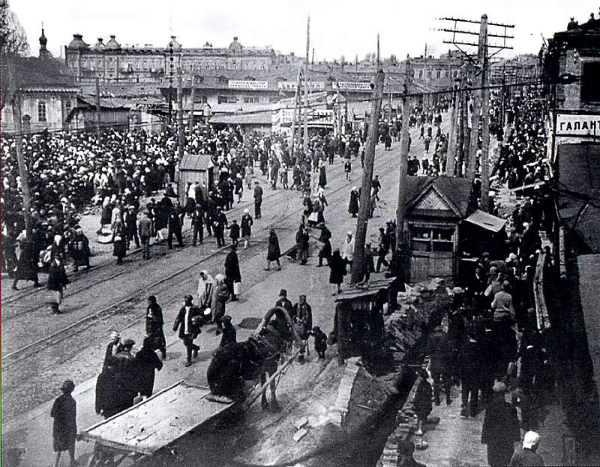 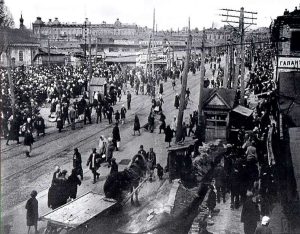 I think about my old-country world frequently. The building where I lived was in the center of it as you know from https://appledoesnotfall.com/my-kiev-building/. It stood on a street named after Vorovsky, a Bolshevik revolutionary. A revolutionary so important that the government had renamed Kreshchatik, the symbol of the city, to carry his name for a time.

However, it’s not the name that earned my hilly street its stripes, so to speak, but the fact that it connected the two most famous Kiev squares, YevBaz on the bottom of the hill and Sennoy on the top.

YevBaz, short for Yevreisky Bazaar (Jewish Market), opened in 1860 as a flea market. During WWII, it was partially destroyed. I was born right after the war and didn’t see YevBaz in its full glory, though the area still had a market-like feel. In the late 1950s, it was erased from the face of Kiev, 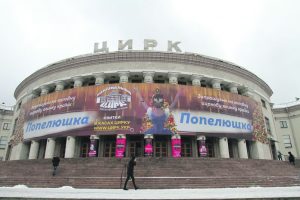 Circus building on Victory Square in Kiev. Photo from: http://kiev.segodnya.ua/kwheretogo/progulka-po-ploshchadi-pobedy-v-kieve-legendarnyy-evbaz-stroitelstvo-gostinicy-lybid-i-univermag-ukraina-782435.html

clearing the way for a grand new circus –– the name Pobeda Square (Victory Square) was officially born, but not for everyday conversation.

For years, a mish-mash of absolutely amazing little shops in the vicinity of the circus reminded Kievites of the beloved noisy YevBaz.

I especially remember a bakery with divinely tasting breads: the dense Ukrainian rye, the dark brick-shaped loaves, the short French baguettes, the white loaves. But the best were the bagels – warm from the oven and crunchy on the outside. The bakery sold them through an opening onto the street for 5 kopecks apiece. Buttered while warm and with a slice of cheese and washed down with hot tea – finger-licking good!

A store “Shoes” next to the bakery actually did have rather decent shoes available occasionally. I will never forget a pair of coral pumps that I bought there. I wore them for a long time. In the beginning, I even slept in them. 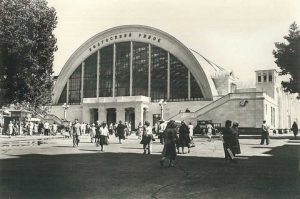 The market and the square that existed on this spot since the 18th century were referred to as the Sennoy. Peasants sold hay here (seno, in Russian) and other animal feed, firewood, and household stuff. The structure that replaced it in the late 1950s was the largest covered market in the USSR.

The market held on to its name; 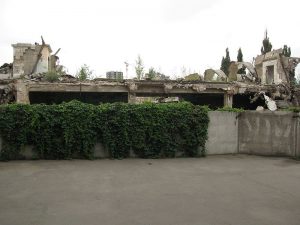 the square became Lvovsky (the road to the city of Lvov began here) but, like YevBaz, not in the everyday speak.

I remember my grandmother’s “outings” to the Sennoy to get a chicken leg quarter. For some reason, it was always sold covertly. Oh, I will never forget the soup with dumplings my grandmother made from that secret chicken.

The nearby store “Fish” looked huge to me. Little jars with caviar and shrimps filled the shelves (apparently priced reasonably). And aquarium with various fish splashing about took up the center of the store. Pick one, scoop it into a net, and the sales person will weigh it for you. Nothing short of a miracle!

Another miracle. A store “without sales people” opened next to the Sennoy market. True, the goods (rather scarce) sat on accessible shelves around the perimeter – take what you heart desires!

The most amazing thing was that there were more sales people there than in a normal store. Here, they simply followed the customers to catch in the act anyone trying to filch anything. The store closed soon. It turned out that it was too unprofitable, even by Soviet standards. And people stole from it, anyway.

More about my building and the environs in my next post.