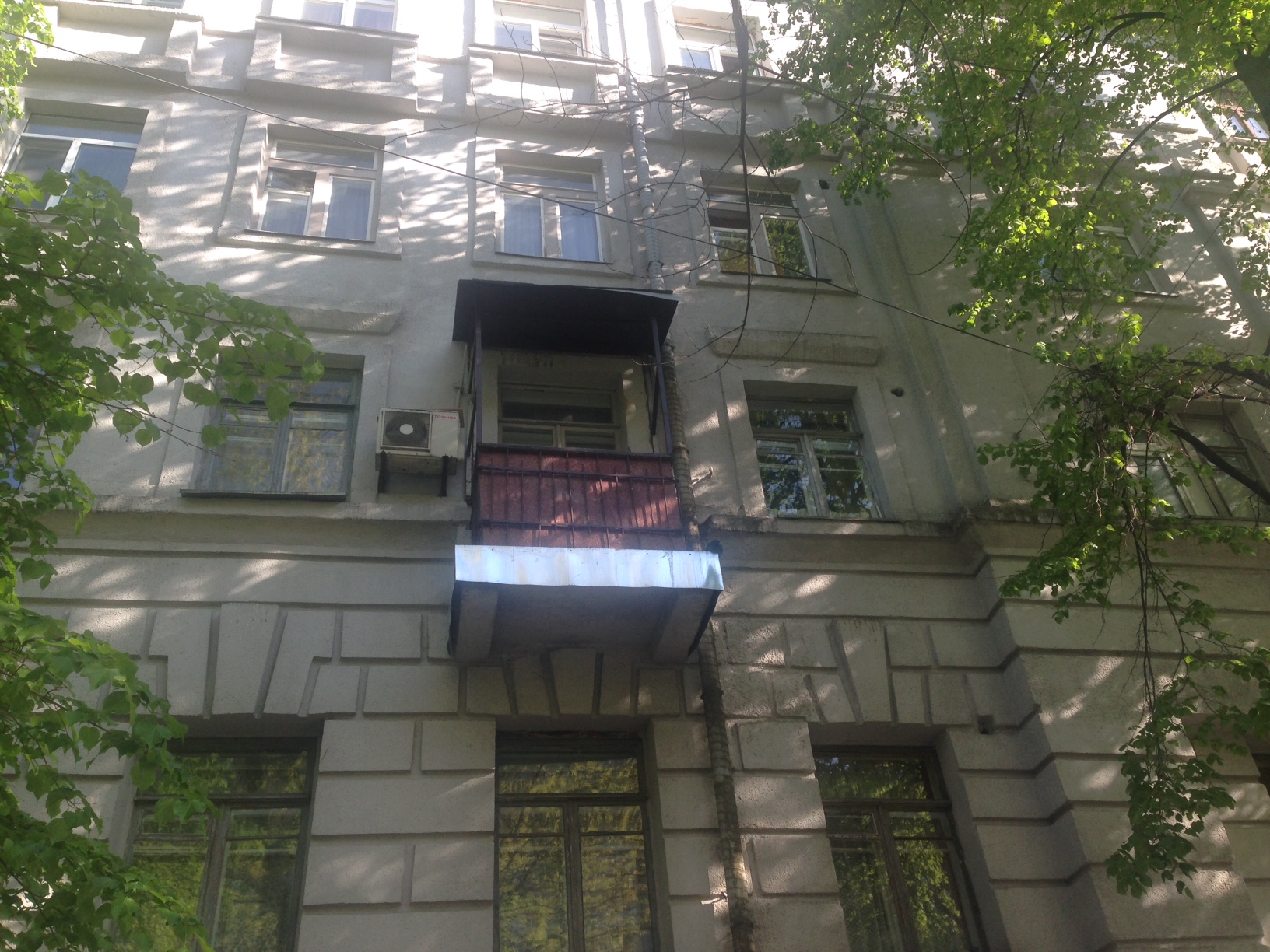 19 May My Miniature Old World, by Marina Brodsky 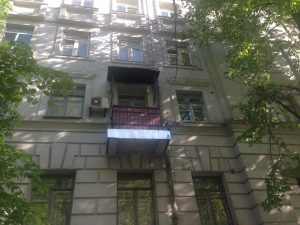 I was born and grew up in a large old building located on Vorovsky Street, 31-A, in Kiev. Before WWII it was known as the Teacher’s Building. And true, many teachers had lived there then and still live there now. It had 5 stories with no elevator and 5 entrances. I spent my entire Soviet life, 42 years, in it. Then one early June morning I left it for good.

We had two rooms in a three-room apartment. In 1945, the government commandeered them from a family of four for my grandmother because she had lost two sons in the war. That family squeezed into a 120-square-foot room – uplotneniye it was called, the Russian word for compression. For a while, 13 relatives crowded in our two rooms – some slept on the table, some under it – so at the peak, 17 people shared a kitchen and a bathroom… but that was how everyone lived.

The original family was less than pleased but years later they got assigned a khrushchevka and a single woman was assigned in their place. She became our close friend, practically part of our family.

The building took up half-a-block between Lvovsky Square and Victory Square. The Victory Square received its name in honor of the victory in WWII but it was still popularly known under its old name Jewish Market (Yevreisky Bazaar, or YevBaz, for short). The legend that the new name commemorated Israel’s victory in the Six-Day War though not borne out by facts was too sweet to every Jewish heart to abandon.

Now, I’d like to tell you about some people who lived in our building.

Nadka is the familiar form from Nadia or Nadezhda. She lived on the 5th floor, a hefty good-looking young woman.  A chronic drunk and brawler, she somehow managed to produce two delightful boys, the ringleaders of the building’s youngsters. I don’t recall who her communal neighbor was but my heart went out to anyone who had to share the common areas with her.

Nadka’s lovers were winos like her but shorter and rather puny. One of them remained with her longer than the rest. She frequently carried him down from the 5th floor. Once, in the heat of a fight that began in her apartment and continued in the stairway, she threw him out of the 3rd story stairway window. And what do you think happened? A miracle – he was so drunk that he felt no fear and, being small in stature, he simply bounced like a cat. He walked away without a scratch.

In the apartment above us lived another alcoholic couple but of a lower rank, meaning somewhat less alcoholic than Nadka.

The wife held an enviable position – she was a salesperson at the vegetable store around the corner. She constantly borrowed money from us then paid back with deficit items, like cabbage, carrots, even a watermelon, depending on the season. It was a win-win for both sides.

Across the hall from Galina lived a Dutch family consisting of a mother and two daughters. They were very poor, even by Soviet standards. The older daughter, pretty and smart, managed to ensnare a Dutch man (in Kiev!), and left for Holland – straight into the jaws of the rotten capitalists.

Oh, how all the neighbors envied her! When she, nice-smelling and as alien as a Martian, visited her mother and sister, it was considered a great honor to exchange a few words with a real-life creature from the unattainable world or to simply glimpse the knick-knacks she had brought.

Two cut-above families in my building had their entire apartments to themselves.

One was a composer. My grandmother brought me to him for an “audition.” She wanted to know if I should learn to play piano. The composer’s verdict was a definite No. Nevertheless, we acquired a piano which was no easy task. After 6 years of expensive lessons and bitter tears, I put my foot down and said No More. The piano still had its use though. I can’t remember how that tradition began but on the eve of my school and university exams I played revolutionary songs and my father and I sang them together. My grandmother shook her head sadly looking at us. I’m not sure whether the songs helped my grades but I was a good student.

The other privileged was a surgeon – the head of a hospital’s cancer ward. Ironically, the surgeon died young – of cancer. Rumors persisted that he had contracted it from his patients.

Across the staircase from us, there lived for a time a lonely old woman who didn’t seem to have any means of support. Every day she knocked on our door and asked for food. We always gave her something but there was no way we could afford to permanently feed another person. That frail old woman eventually died of hunger when our family was away on vacation. It’s so painful to think of those old folks neglected by their country when we talk so much about overeating in America.

One morning, our phone rang. It was my girlfriend Tanya who went to work every day on the noisy streetcar that passed by our building. She told me to immediately look out the window. I did. A lifeless body of a man hung from a 4th floor window. That quiet unremarkable man was in his 40s. We were friends. Only the day before he came over and had a long conversation with my father – he was saying his good-bye. No one knew the reason he took his life, no one suspected he was suffering. But the body of that hapless man was taken down with surprising efficiency. As we learned from his last letter he could not handle some unfairness at work.

After my immigration I wrote to my neighbors for some time but gradually the correspondence dried up.  I often think about my building, a miniature of the world left behind.