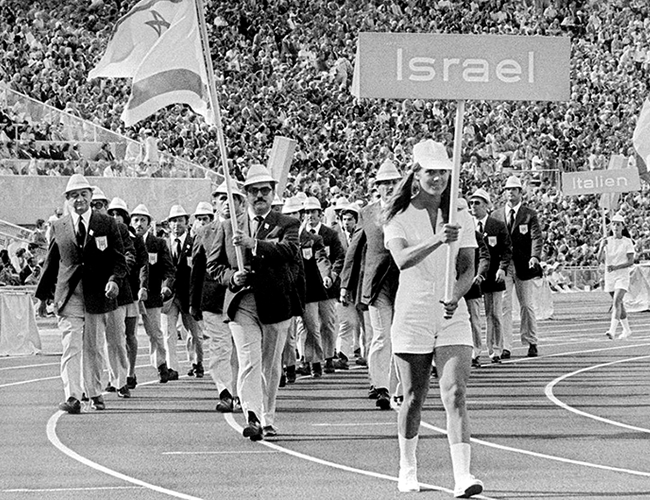 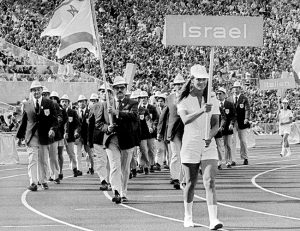 Summer Olympics in Munich, 1972. Israeli delegation at the opening ceremony. Photo from: http://www.aldia.co/sites/default/files/munich1972det.jpg

The Munich Olympics was the first in Germany (then-West Germany) after the 1936 Berlin Games during the Nazi regime. It projected great openness. And it strove to erase the shadow of its ill-famed predecessor and of Munich’s reputation as the “cradle of Nazism.” So, security was provided by hearty men in white pants and hats and light-blue jackets. Too in-your-face security measures would only spoil the atmosphere of trust. Nothing prepared the organizers for what would become known as the Munich massacre.

The official motto of the 1972 Olympics that began on August 26 was “The Happy Games.” The 42-strong Israeli delegation that included Holocaust survivors and children of survivors marched proudly on German soil under the flag of its new historic homeland.

Then, on September 5, an Olympic Village became the scene of a terrorist act. That was another first in the modern Olympic history (since 1896). 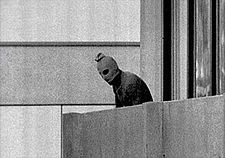 Summer Olympics in Munich, 1972. Photo of one of the kidnappers on the balcony of the building where the Israeli team lived. Photo from: https://en.wikipedia.org/wiki/1972_Summer_Olympics

At the time, Germany had no counter-terrorism forces.

An 18-hour badly-botched standoff with members of the Palestinian organization “Black September” followed.

The Palestinians murdered eleven Israeli coaches and athletes and a German policeman. Two of the athletes were recent Soviet immigrants. 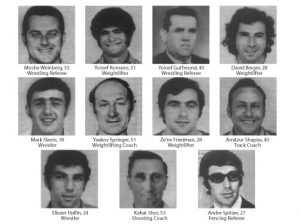 Israeli Olympic Athletes and Coaches murdered in the 1972 Munich massacre. Photo from: httpwww.forumdaily.comterakt-v-myunxene-1972-tragediya-navsegda-izmenivshaya-olimpijskie-igry

(The organization’s name memorialized the expulsion of Palestinians from Jordan in September 1970. Lulled by the certainty of perpetual harmony between Arabs, we in the Soviet Union were stunned. Did the Voice of America really mean that not all Soviet friends loved each other?)

The Olympic Committee interrupted the Games for 24 hours. 80,000 people and 3,000 athletes attended a memorial service. Ten Arab states refused to fly their flags at half-staff. Only Jordan openly denounced the actions of the Palestinians—I suppose they did not throw them out for nothing.

Conspicuously, the Soviet team did not show. Complicity? This absence, combined with the Kalashnikovs used by the terrorists and the fresh memory of the 1968 Soviet invasion of Czechoslovakia, seemed to support the rumors. However, some witnesses believed that the truth was mundane. The Soviet government simply neglected to tell its team to attend or not to attend. And the delegation leaders, aware of the price to pay for taking an initiative, erred on the side of caution. Then Moscow, to save face, introduced a theory of potential danger to the Soviet athletes outside their quarters that had prevented them from attending.

The Olympics and the world learned well the lessons of the Munich massacre. Countries created special anti-terrorist forces (the KGB founded its Alpha group in 1974). Israel never again relinquished the responsibility for its delegations abroad. Organizers of sport competitions began spending huge sums and using the newest technology on security. Inconvenience of security checks beats loss of life any day.

The Munich tragedy has not been forgotten.

Books have been written about it: Vengeance, Striking Back, Massacre in Munich, Massacre in Munich: The Manhunt and One Day in September that is also the basis for a documentary with Michael Douglas. And Steven Spielberg’s Munich won an Oscar.

In 1999, the Sydney Olympic Stadium unveiled a memorial plaque. In 2012, the German news magazine Der Spiegel published an investigative report about the West German mishandled response to the Munich massacre.

Still, Israel’s appeal for a moment of silence at the 2012 London Games was rejected. It would be too sad for a festive Olympics opening.

The situation changed in 2014 when the International Olympic Committee helped finance the construction of a memorial in Rio de Janeiro. 44 years of tireless efforts by the victims’ families resulted in the installation of the monument in the Rio Olympic Village honoring 15 people who died in all the modern Olympics, including the 11 Israelis murdered in Munich. From now on, this ceremony is an official Olympic tradition.

A long time ago, Munich had installed a stone tablet at the entrance to the Olympic Village and a plague on the building that housed the slain Israeli athletes. But next week, on September 6, the 45th anniversary, the Munich Massacre Memorial and Museum will open its doors.

“Our design idea was to cut into the hill, to take something away from the landscape,” said the architect. “When you think about the massacre, it took something away, cutting into the lives of the victims, the families, the Olympic Games. We wanted to fill this void with memory.”

In the words of the Bavarian minister of culture, “It is late. But it is not too late.”