Russian Mafia and I 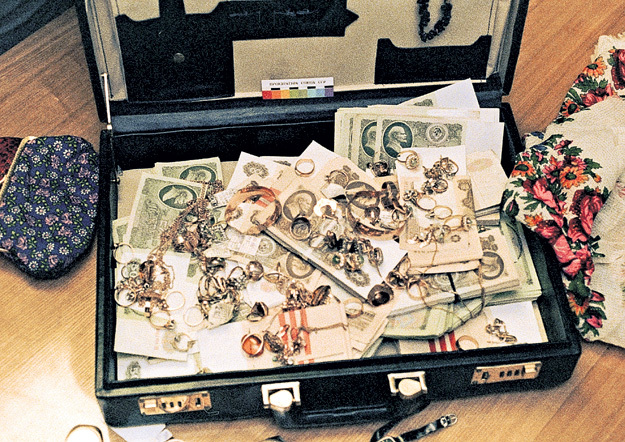 03 Feb Russian Mafia and I 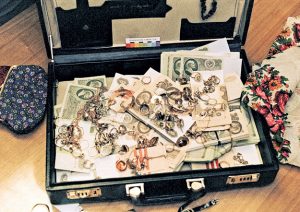 Money and jewels confiscated from Soviet mafia. Photo from: http://evoat.livejournal.com/731829.html

My friend’s grandson asked to find Russian-language sources about Soviet mafia. These “insider” tidbits in his essay would awe the professor for sure. Well, they awed me. They painted a picture too grotesque to comprehend (and way too expansive for a post).

The meandering ways of the internet led into the topic of Russian mafia, meaning the organizations sprung up in the post-Soviet space.

Last time any rumors on that subject reached me date back to about 30 years ago. My brain retained some of them without my consent but none are worth repeating.

In fact, I did not believe in the possibility of serious Russian mafia. The notion belonged in TV police thrillers portraying bad guys named Dmitry, Boris, or Svetlana. They spoke English with a stereotypical Slavic accent, interjected rehearsed Russian phrases, and were invariably found guilty of gruesome crimes hatched in Brighton Beach.

Look What I Started

Brighton Beach has been the capital of the Russian, to use a generic term, immigration since its start in 1975. When we first visited New York in the mid-1980s Brighton Beach sported so many Russian restaurants along its main drag that, to our provincial Chicagoan eyes, they could seat the entire Russian-speaking community of New York.

We wondered how these establishments survived. Our New York friends didn’t know. Neither could they afford to eat out frequently. However, they boasted that the restauranteurs “knew what they were doing.” And that “our boys” had freed this prime beachfront area for former Soviet compatriots and kept it safe. It didn’t occur to us to question who the “boys” were and how they accomplished the freeing and the peace-keeping.

The tide of Soviet Jewish immigration of the 1970’s did carry its share of bad apples. While the intelligentsia ran from discrimination and hopelessness, those black marketeers who were on the verge of losing their law enforcement protectors ran from imprisonment and from life of keeping money under the mattress, fear of spending it, and of waiting for a knock on the door. As a matter of fact, they, not the intelligentsia, formed the first contingent of Soviet Jewish immigrants.

By the time we arrived in Rome where we waited for our American visas, tales of Russian conmen and swindlers abounded. Some even sold the contents of their furnished rentals at the flea market before leaving for their final destination.

Criminal and Proud of It

So, yes, some crooks polluted our ranks but, as far as we were concerned, American life made this skill obsolete. Or rather made them entrepreneurs. A few of my former compatriots have a knack for more-or-less petty schemes but Casa Nostra? Laughable!

And then I saw this European security concerns bring Russian mafia back onto agenda. Not laughable!

After the collapse of the Soviet Union, its spiritual twin Russia combined with the other pieces of the empire began transforming into an international criminal player. “Today, Vladimir Putin appears to be… regarding Russian-based organized crime abroad not as a threat or an embarrassment, but a potential opportunity. …Understanding the nature of this threat will be increasingly important for European security.”

The climate in the United States is less favorable for the Russian crime activities but things happen. On the other hand, one of the U.S. Attorneys on this case was the child or grandchild of an immigrant family that came when I did.

I don’t know how helpful my research was to my friend’s grandson but I learned a lot.