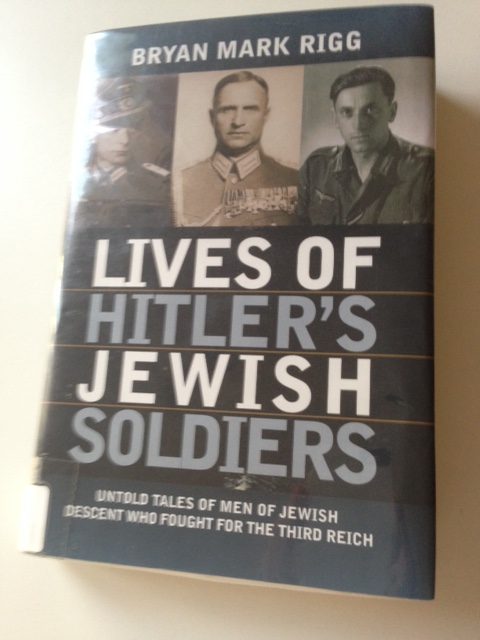 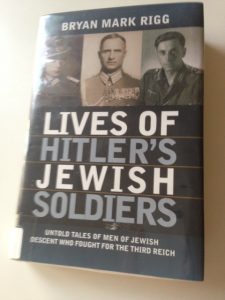 Lives of Hitler’s Jewish Soldiers: Untold Tales of Men of Jewish Descent Who Fought for the Third Reich, by Brian Mark Rigg. University Press of Kansas. 2009.

Brian Rigg analyzes the history of the Hitler’s evil racial laws and the lives of some full or part-Jewish soldiers of the Nazi army. He estimates that there were about 150,000 of them, including high-ranking officers. Some falsified their documents, changed names or lied. Many thought, mistakenly, that they protected their Jewish relatives by serving honorably.

“With a stroke of a pen” Hitler “Aryanized” thousands more because they provided unique expertise, were severely disabled in the war, came from distinguished families, or had blond hair and blue eyes. This clemency, however, did not protect their families from concentration camps. Non-Jewish wives who did not divorce their Jewish (as defined by the Nazi) spouses presented a more reliable protection.

The soldiers from part-Jewish or converted families were staunched German patriots. They did not know about the systematic extermination of Jews. However, even if they did they would have no choice but to continue their service in order to survive.

The author interviewed as many from this cohort as he could. He examined each person’s attitudes, background, family dynamics, and post-war experiences. He found that some grew to hate the Hitler’s regime. Some were traumatized for life from the years of hiding their identities or because they were not able to save their relatives. Many admired Hitler for the economic success he brought about — “people often forget that Hitler had some good characteristics.” And one said “Do you think the Germans would have followed a completely evil, deranged madman?”

It is such a common and seemingly logical question: How could you, a Jew, fight in the Nazi army? It is as common and logical as the question addressed to someone who denounced his friends under Stalin’s torture. Before you say  “I would have never…”, read this book, erase your hindsight and imagine yourself in the shoes of the people who had to make the choice. Or had no choice.

Lives of Hitler’s Jewish Soldiers: Untold Tales of Men of Jewish Descent Who Fought for the Third Reich.